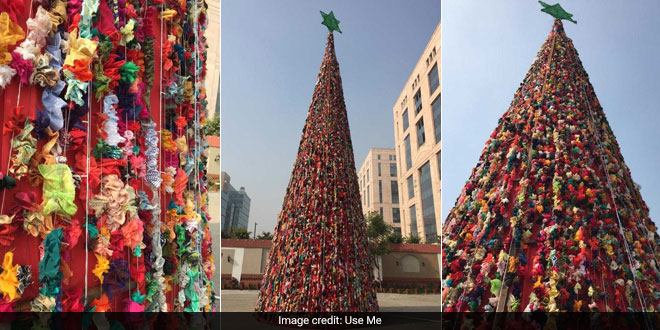 New Delhi: “‘Tis the season to be jolly…and environment friendly!” says 30-year-old Meenakshi Sharma, who started ‘Use Me’, a Delhi-based organisation that turns waste into creative products. And so after an exhaustive month long process the Use Me team has managed to turn about 200 kilograms of scrap fabrics into a 40-feet tall handcrafted Christmas tree.

For an installation of this huge size, the team used a metal base and gave the installation the support it needs to be a steady structure. Then, scraps of waste clothes procured from factories, boutiques, and households were used to create the tree itself. The colourful pieces of clothes helped create the illusion of ornaments like bells and mistletoes. 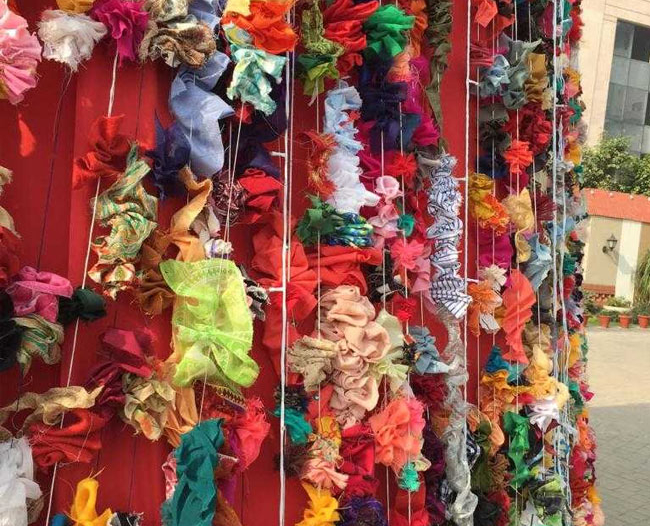 The colourful scraps of clothes look like flowers and ornaments

For this initiative Meenakshi’s organisation collaborated with 32nd Milestone, an amusement park in Gurugram.

As per a statement by 32nd Milestone, the group wanted to celebrate the spirit of Christmas by ensuring minimal carbon footprints. “Christmas is in the air…but so is pollution! The need of the hour and the flavour of the season is to be eco-sensitive,” reads the statement.

They were initially planning on installing a 40-feet tall Christmas tree made of plastic to highlight the issue of plastic pollution but soon realised how much plastic would be used in the process and discarded after 12 days of display, Meenakshi told NDTV.

Recognising the dichotomy in the intent and the idea, 32nd milestone connected with Meenakshi with the proposal of introducing a zero-waste ‘avant- garde’ Christmas tree, which is eco-friendly as well as plastic free. As per Meenakshi, Use Me’s experience of participation in several school fares and college fests with the same agenda of introducing waste as resources and upcycling is what made the organisation 32nd Milestone’s first choice.

We’re known for upcycling waste into daily utility products like carrying bags, home décor items and fashion accessories. Use Me helps save around 200 kilos of waste every month from being discarded and adding to the ever-growing garbage pile, she said.

Talking about the process, Meenakshi explains, “This initiative is our sincere pursuit of working towards a sustainable environment. The tree has a metal base and was made by a team of 30 women who worked for almost a month to upcycle 200 kgs of colourful fabric scrap which we collected from factories, boutiques, and households, and transformed them into beautiful and unique fringes, buntings, and flowers.”

The result – this exquisite and unique Christmas tree. 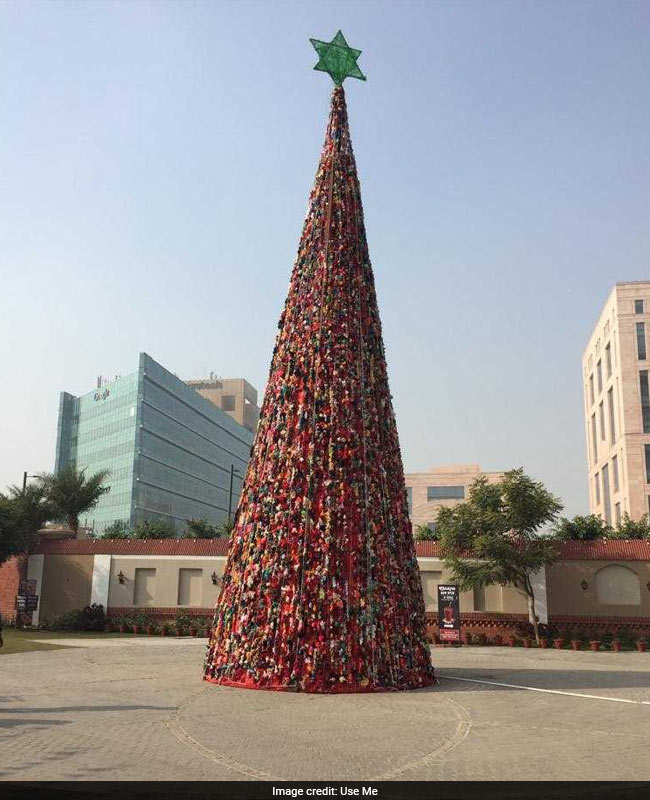 It was ensured no plastic was used in the making and styling, Meenakshi added.

The initiative did not only prevent the 200 kgs of fabric waste used from going into landfills, but it also promoted the usage sustainable zero-waste resources, shunning plastic usage and most of all created employment opportunity for about 20 women. Once the festival season gets over and the tree gets dismantled, Meenakshi says that the 200 kgs of waste used in the tree will be upcycled again into products like rugs and fringes among others.

By reusing the scrap this way, we can increase the life span of the waste used as raw materials, she added.