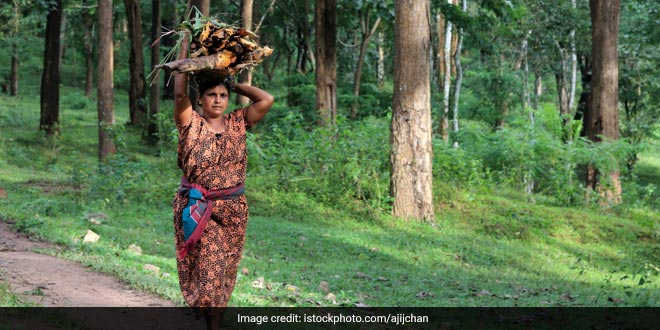 Sundarbans: Climate change has turned the waters saline, making agriculture unviable and forcing them to turn to fishing. For women in the marshlands of Sundarbans, this switch is not just about livelihoods but also coping with the debilitating health impact on their lives. Caught in a vicious trap that means spending hours waist-deep in the very waters that no longer nurture their fields, the women face a battery of menstrual, urinary tract and other infections. With agriculture becoming unviable due to the increase in salinity of the water because of sea level rise, more and more women are becoming dependent on fishing.

This means their exposure to saline water is also increasing, Nihar Ranjan Raptan, director of the NGO Goranbose Gram Bikash Kendra (GGBK) who works in the Sundarbans, told PTI.

Irregular menstrual cycles, vaginal infections, recurring UTI and miscarriages are common amongst the women in the Sundarbans, Mr. Raptan added.

The ecologically fragile Sundarbans region, which holds a vast mangrove forest, falls in West Bengal’s South 24 Parganas region and is said to be one of the worst affected regions in India due to climate change. The area has been battered by frequent cyclones, more than any other place in the country.

According to Revati Mondal, who has been working in the Sundarbans’ Goran Bose village for more than two decades, the salinity of the water has been increasing steadily – and the health of the women deteriorating.

With frequent storms over the years, the salinity of water of most of the rivers and ponds has increased in almost all areas of the Sundarbans, the ASHA worker said.

I visit about 25 homes every day and most of these homes have women who have one or the other problems related to menstruation. The husbands of most of these women are migrant workers and based somewhere else. The women meet their day-to-day expenses by selling prawns and fish they catch in the river for which they have remain in waist-deep water for four-six hours per day which is the main cause of the health hazard they are facing, Ms Mondal told PTI.

Soma from Hogalduri village in South 24 Parganas, is living through the misery. The 31-year-old has got urinary tract infection at least four times in the last one year, and said she goes everyday to fish and makes her living selling prawns and small fish she manages to catch. This means standing in waist-deep water every day for about four to six hours.

I am separated from my husband and have to fend for myself and my two children. Earlier I was ashamed to discuss my menstrual problems with ASHA workers or doctors but after the situation became unbearable I had no option left, she said.

Ms Mondal, who has been witness to 20 years of degradation of the environment and of many lives, said hiding menstrual issues due to the stigma associated with it makes the situation worse.

In so many cases, these women shy away from telling their problems to doctors. They come to even me only when it turns severe and require much more intensive treatment. Some women have also reported miscarriages due to repeated infections, she said.

Like Soma, Faiza is also suffering with multiple health issues. The 25-year-old from Basanti village said even freshwater ponds near her home have turned salty due to frequent cyclones.

These ponds are our primary source of water now. In the absence of fresh water, we use water from these ponds for washing and cleaning. Even the cloth we use during our period is washed in this water. This leads to all kinds of infections, she said.

Besides vaginal problems, women in the area are also battling skin diseases such as eczema and infected sores due to prolonged exposure to saline water.

Piyali, only 23, said the past 15 years or so have been very difficult.

I have been fishing since I was eight or nine years old. I would help my mother in fishing. When I got married, I would go for fishing to support my family. Since 2008, frequent cyclones have been hitting us. And this has made things worse. It’s not just frequent infections. I have been unable to conceive and doctors attribute this to my poor reproductive health,” said the woman from Goran Bose.

Directly the infection of urine will contaminate the vaginal flora, the organisms present in the vagina, and it will be altered, and it will lead to vaginal infection which in turn affects ovarian health, Ms Diwakar told PTI.

Recurrent UTIs, she said, may lead to miscarriage or even preterm labour. Covid has exacerbated an already bad situation, said GGBK’s Mr Raptan.

The access to hospitals and doctors was severely impacted during COVID-19 and it worsened the existing health conditions of women here. They continued to go into water for livelihood and for many their infections remained untreated and worsened. With men migrating in the search of better jobs, women of the area are fighting the climate change battle alone. Tubewells in the area have also become contaminated in the area due to storms and frequent heavy rains. The low-lying villages get inundated in heavy rains and tubewells get submerged. When the waters recede, impurities enter the tubewells causing other water-related diseases too, Mr Raptan said.

According to IMD, the return period of cyclonic storms in South 24 Parganas district is 1.67 years on a scale of 1.5 to 60 years. Shorter return periods indicate more frequent cyclones. And more problems for those who live in the marshlands of Sundarbans.

Children With Immunodeficiency At Higher Risk Of Serious COVID-19: Study