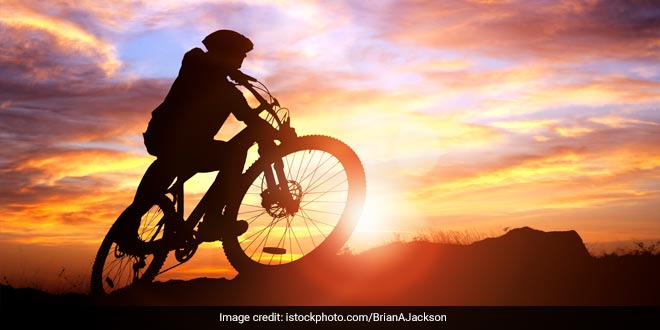 The cyclist, Anil Chauhan, said his mission was to stop the death of cows due to single-use plastic

Lucknow: Accompanied by daughters, seven-year-old Shreya and four-year-old Yukti, Anil Chauhan has cycled 11,000 km from Daman and Diu to Lucknow. He aims to pedal his way to Bangladesh raising awareness about the scourge of single-use plastic. He began his journey on January 1 and has so far traversed through Goa, Gujarat, Rajasthan, Delhi and Madhya Pradesh. Along the way, he interacted with villagers and children, urging them to shun single-use plastic.

Asked why he was undertaking such an arduous journey with his two daughters, Mr. Chauhan, a widower, said his mission was to stop the death of cows due to single-use plastic.

Most of the cows in the country die by eating single-use plastic thrown in the garbage. Plastic is also one of the main reasons for diseases among cows, he said.

Carrying just one bag and two blankets with him, Mr. Chauhan has been cycling for over seven months, resting at temples, bus stops, railway stations or dharamshalas after sundown. He said that people there give him food and water upon knowing his cause.

Mr. Chauhan also said that he gets support from school administrations, village heads and locals when he interacts with villagers and children making them aware of the havoc single-use plastic is wreaking on the planet.

People in my village in Daman and Diu made fun of me when I set out on my mission with my daughters. But I carried on as this is my duty, he said.

Asked why he took Shreya and Yukti along with him on the journey, Mr. Chauhan said his wife passed away recently and he now has only his daughters as his family.

The mission is big and the journey long. So I have brought my daughters with me.

He aims to go to Bangladesh and for that got a passport done for himself and his two daughters. He is hopeful of getting visas.

There are many restrictions on single-use plastic in the country. The regulations are strict but not effectively implemented, Mr. Chauhan claimed.