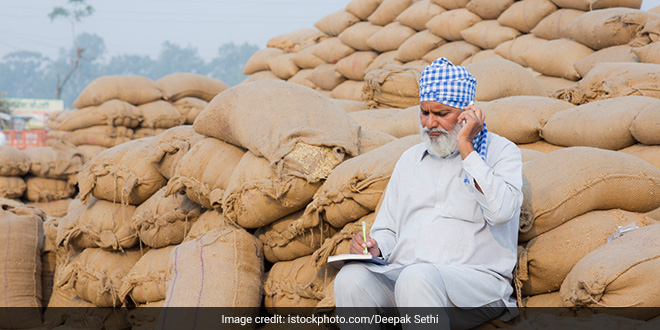 New Delhi: Organisations representing over 350 million farmers and producers wrote an open letter to world leaders on Monday, warning that global food security is at risk unless governments boost adaptation finance for small-scale production and promote a shift to more diverse, low-input agriculture. Heads of states will discuss food security and climate finance at the UN Climate Summit (COP27) in Egypt on Monday (November 7). Food and agriculture are largely overlooked in climate negotiations despite being responsible for 34 percent of the emissions, the majority of which come from industrial agriculture.

Over 70 networks and organisations representing farmers, fishers, pastoralists, and forest producers have signed the letter including the World Rural Forum which represents 35 million (one million=10 lakhs) farmers across five continents, the Alliance for Food Sovereignty in Africa which represents 200 million small-scale producers on the continent and the Asian Farmers Association for Sustainable Development with 13 million members.

Organisations from Jordan to the UK and India have also signed. The letter warns that the “global food system is ill-equipped to deal with the impacts of climate change, even if we limit global heating to 1.5 degree Celsius” and says “building a food system that can feed the world on a hot planet” must be a priority for COP27.

Small-scale producers are critical for global food security, producing as much as 80 percent of the food consumed in regions such as Asia and Sub-Saharan Africa. Yet, they accounted for only 1.7 percent of climate finance flows in 2018 – just USD 10 billion (one billion=100 crore) compared to the estimated USD 240 billion a year needed to help them adapt to climate change. At the Glasgow climate summit (COP26) in 2021, rich countries agreed to double overall funding for adaptation to USD 40 billion a year by 2025 – still only a fraction of what is required.

Elizabeth Nsimadala, President of Eastern Africa Farmers Federation, which represents 25 million food producers and is a signatory to the letter said: “The producers in our networks feed millions of people and support hundreds of thousands of jobs but they have reached a breaking point.

There needs to be a massive boost in climate finance to ensure small-scale producers have the information, resources and training necessary to continue feeding the world for generations to come.

COP27 is taking place in the middle of a global food price crisis. While there is not yet a global food shortage, extreme drought, floods and heat has damaged harvests across the globe and scientists have warned of an increased risk of simultaneous crop failures in the world’s major breadbaskets. India recorded its hottest March on record this year, which reduced its wheat output by 3 million tonnes. A highly erratic monsoon flooded several states in September, damaging oilseeds and pulses, and delaying the paddy harvest.

According to reports, stocks of wheat and rice with government agencies have plunged to a five-year low owing to weather-related disruptions. This has prompted India to ban wheat exports and curb rice shipments abroad.

The Intergovernmental Panel on Climate Change has said a shift to more diverse, low-input food systems is key to maintaining food security in a changing climate.

Ma Estrella Penunia, Secretary General of the Asian Farmers’ Association for Sustainable Rural Development which represents 13 million farmers across Asia said: “USD 611 billion is spent subsidising food production every year – much of it on industrial,chemical-intensive agriculture that is harmful to people and the environment. This can’t continue. Leaders must listen to farmers and put their political weight and financial muscle behind a shift to more diverse, sustainable and empowering food production – especially agroecological farming, fishing, forestry, herding and pastoralism.” Food and agriculture are largely overlooked in climate negotiations despite being responsible for 34 percent of the emissions, the majority of which come from industrial agriculture.

The signatories call on governments to work with them to build a stronger, more sustainable, and fairer food system.

Laura Lorenzo, Director of the World Rural Forum said:“Food and agriculture have been sidelined in climate negotiations and the concerns of small-holder producers ignored. Small-scale family farmers need a seat at the table and a say in the decisions that affect us – from secure access to land and tenure, to accessing finance –if we are to rebuild our broken food system.”