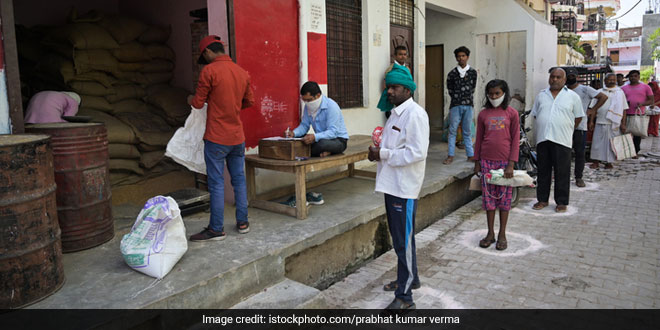 New Delhi: In his address to the nation on Tuesday (June 30) Prime Minister Narendra Modi announced that Pradhan Mantri Garib Kalyan Anna Yojana (PMGKAY) a key government scheme for distributing free foodgrain would be extended to November-end to provide relief during the festival season as the country fights coronavirus. PMGKAY which was originally announced in March after the nationwide lockdown was imposed in the country to contain the COVID-19 pandemic was to be implemented for a period of three months- April, May and June.

Addressing the nation for the sixth time after the coronavirus outbreak, PM Modi said,

Keeping in mind all the festivals that are coming up in the next few months, this scheme to provide 80 crore people with 5 kg free ration and 1 kg dal (pulses) per month will now be extended till Diwali and Chhath Puja, or till the end of November.

Under PMGKAY, foodgrains are distributed to all the 80 crore beneficiaries under Targeted Public Distribution System- those under Antyodaya Anna Yojana (AAY) and Priority Households (PHH). Currently, each person who is a ration cardholder gets 5 kgs of extra ration free of cost. Along with foodgrain each beneficiary household (each ration card no matter how many members) also gets 1 kg dal/gram (chana) per month. This is over and above their regular entitlement under the Public Distribution System (PDS) which includes 35 kg of foodgrains per month to households eligible under AAY and 5 kg of foodgrains per person per month to PHH beneficiaries at a subsidised cost of Rs. 2 per kg of wheat and Rs. 3 per kg of rice. During the last three months, several states provided the entire quota of ration for free of cost to the NFSA beneficiaries along with the additional free ration under PMGKAY.

The breakup of the ration into wheat and rice varies as per regional preferences and availability of the grain. For example, in Delhi, it is usually 4 kg wheat and 1 kg rice while in West Bengal it can be the other way round. According to Dinesh Saddullanager, a PDS shop owner in Tisotra village of Bijnor, Uttar Pradesh, at many places in the state, the additional 5 kg grain provided under PMGKAY is only rice as it is available in larger quantities with the Department of Food and Civil Supplies even though most people prefer wheat.

The Prime Minister also added that the government plans to spend Rs 90,000 crore on expanding the free ration scheme till November.

The Prime Minister also talked about the “One Nation, One Ration Card” scheme which he said would benefit thousands of migrant workers and their families who had no fixed home.

Taking the announcement made by the Prime Minister a notch higher, Mamata Banerjee, Chief Minister of West Bengal has announced on Tuesday (June 30) that people in the state will receive the additional free ration till June 2021.

Welcoming the announcement made by the Prime Minsiter, Kavita Shrivastava, National Secretary of the People’s Union for Civil Liberties (PUCL) and Convener of the steering committee of Right To Food Campaign said,

We welcome the decision of the Central government to extend the PMGKAY for five months. This is a much needed measure and will help the 80-crore people who are listed under NFSA (National Food Security Act), in coping with the economic distress caused due to the lockdown on account of COVID-19.

Ms. Shrivastava, however, expressed concerns about the migrant workers and those who are not ration cardholders and might face starvation in the near future. She asserted,

We are anguished to note that no policies have been announced for those without ration cards or those who are additionally included by state governments through state schemes. Most often it is the poorest and most marginalised who are left out of the PDS due to not possessing the necessary documents to acquire a ration card. Even the Atmanirbhar package which included free rations for an additional 8 crore people for two months has not been extended. At a time like this, when foodgrain stocks are at a record high and people are facing the real possibility of hunger and starvation, the government should have universalised the PDS and ensured that anyone in need of ration would be provided with it irrespective of whether they possessed a ration card.

Ms. Shrivastava added that the State governments must be given additional grains at subsidised prices so that they are able to expand the benefits equally to all beneficiaries.

Dipa Sinha, Assistant Professor at Ambedkar University, New Delhi and a Convener of Right To Food Campaign also shared the concerns regarding the crisis being faced by migrant workers and daily wage earners. She said,

The migrant worker crisis has exposed the porousness of our social security system and the lack of resilience among the working class to cope with such economic shocks. Most migrant workers do not possess ration cards and therefore, will not benefit from this scheme. The Prime Minister mentioned the One Nation One Ration Card (ONOC) scheme as well in his speech today. The ONOC is slated to be rolled out completely only by March 2021. Even if the ONOC were available across the country, it would not therefore solve the problem of access to foodgrains for those who are excluded from the PDS entirely.

As per the Right To Food activists and experts, the only way to ensure that nobody is excluded from the PDS is to universalize it which will allow everyone who wants rations to access it. They also emphasised on the inclusion of dal and edible oils as part of the monthly entitlements. Ms. Shrivastava asserted,

It is unacceptable if even a single person died of starvation in our country when the godowns are overflowing.

Amrita Johri, an activist associated with Roti Rozi Adhikaar Abhiyan, a people’s movement working for the rights of the daily wage workers and urban poor, emphasized on the fact that many times, in case of short-term seasonal migration, only one or two members of the household migrate, leaving the ration card behind for the rest of the family to use. She said,

We welcome the decision of the Central government to extend the additional ration distribution scheme. However, it is worrying to see that no policies have been announced for those without ration cards and nothing has been said on universalisation of the PDS.

Basanta Kumar Kar, Recipient of Global Nutrition Leadership and Transform Nutrition Champion Award welcomed the central government’s decision of extending PMGKAY but highlighted that during this pandemic time, the state government should consider the inclusion of the naturally biofortified crops like minor millets and fortified products to address micronutrient malnutrition especially among children and pregnant and lactating mothers. He said,

The pregnant and lactating mothers and children under six years of age who are covered under ICDS (Integrated Child Development Services) program are hardest hit. With anaemia and all forms of malnutrition and micronutrient deficiencies, these women and children need safe and nutritious diets. It can supercharge demographic dividend and build human capital potential. In order to fulfil the agenda of POSHAN Abhiyaan, would recommend universal rationing and inclusion of nutrition-rich foods for pregnant and lactating women and children.

Mr. Kar also called for more transparency and public accountability in the distribution of ration at the state level along with eliminating exclusions and disruption in food security of the people. He suggested that village level Social Audits following social distancing norms can be conducted through local government bodies to prevent pilferage.

National Doctor’s Day 2020: A Sand Art Salute To The ‘Superheroes’ For Their Selfless Service

Unlock 2: Lockdown In Containment Zones Extended Till July 31, All You Need To Know