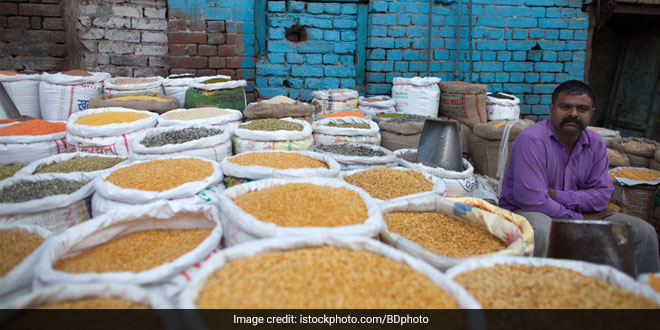 New Delhi: To address the issue of food security of migrants, Union Finance Minister Nirmala Sitharaman has announced a pan India implementation of ‘One Nation, One Ration Card’, a system for national portability of the public distribution cards under which migrant workers can take food grains from any ration shop across the country. The system which was started on January 1, this year, in 12 states, was originally supposed to be extended to the whole country by June 2020. However, the timeline has been shifted and as per the new timeline given by the Finance Minister, the ‘One Nation, One Ration Card’ will be extended to 23 states by August and all states and Union Territories will be covered by March 2021. According to experts, the national portability of the public distribution cards is a welcome move and is what they have been demanding from the government for a very long time, but the implementation of the scheme is not clear yet, as the states are yet to provide their plan.

While announcing the pan country implementation of ‘One Nation, One Ration Card’ system, Finance Minister Nirmala Sitharaman on May 14 said,

She further said that state governments will be responsible for the implementation while the centre will provide financial support.

Currently, ration cardholders can avail their entitlement of subsidised foodgrains in the place of issue of the card. Under the ‘One Nation, One Ration Card’ system, ration cards will become portable electronically or become digitised, making a single ration card eligible at any fair price shop. The details about the ration cardholders and the food grain quota for the month will be accessible at any ration shop in the country, irrespective of where the ration card was originally issued. Till now, 20 states/ UTs have become been integrated into the One Nation, One Ration Card’ system – 12 on January 1 and 5 on May 1, and 3 on June 1.

Ram Vilas Paswan, Minister for Consumer Affairs, Food and Public Distribution, shared via his Twitter account that by August 1, three more states- Uttarakhand, Nagaland, and Manipur will be integrated into the ‘One Nation, One Ration Card’ system.

An official from the Department Of Food, Supplies and Consumer Affairs, Delhi said,

Some experts who have working on the ground for food security and rights of the poor and needy and have been tracking the Public Distribution System (PDS) have raised concerns regarding complete dependence on technology. While talking about the issues faced by various states in implementing the ‘One Nation, One Ration Card’ system within the original timeframe (June 2020), Dipa Sinha, Assistant Professor at Ambedkar University, New Delhi said,

‘One Nation One Ration Card’ was announced last year and was to be rolled out in June this year. But the Finance Minister has pushed it till March 2021. The FM gave no explanation about why the scheme is being pushed back? Nor has Ram Vilas Paswan, Union Minister for Consumer Affairs, Food and Public Distribution. Even though there is an urgency of helping the migrant workers now more than ever. What we have understood from the ground is that technology is the biggest constraint. This is because for implementing ‘One Nation, One Ration Card’, all ration cardholders must have seeded their Aadhar cards with their ration cards and all Fair Price Shops in the country have ePoS(electronic Point of Sale) devices. A large number of people are yet to seed their Aadhar cards and the government has increased the deadline for this to September and a large number of shops do not have ePoS.

She said that most ration shops in rural areas do not have a network connection strong enough to help in the ration distribution process. Ms. Sinha highlighted that Tamil Nadu and Chhattisgarh are such states that have been able to commission the intra-state ration card portability with proper technological infrastructure in place even at the village level. She also highlighted that ration stock refill happens only once in a month as of now which needs to be done at least twice a month for the smooth implementation of the new PDS system so that the ration shopkeeper can cater to the additional ration needs.

Anjali Bharadwaj of Right to Food Campaign, a people’s initiative for monitoring the implementation of the NFSA (National Food Security Act) said,

Portability of ration card is something that we have been consistently saying that it should be done but how much dependence on the technology will be there is yet to be seen. Past experiences have shown that both PDS shopkeepers and ration card holders have faced numerous problems because of the Point of Sale (PoS) machines because of the poor network connection, mismatch of biometrics and power cuts and other such technical issues. Because of these problems, some states are actually giving up technology and going back to maintaining records manually in registers. Delhi is one such state to do it. One Nation, One Ration will force the states to rely completely upon technology. Therefore, there is a need to figure out a way in which digitisation and portability of ration cards can be done effectively without involving biometrics.

She further added that because of the reliance on biometrics, many eligible cardholders have been denied ration because of the mismatch of fingerprints. She asserted that fingerprints are bound to fade among the people who are construction labourers, domestic workers and farmworkers.

Ms. Sinha highlighted that since even before the NFSA-2013 was implemented, Chhattisgarh was following a CORE PDS (Centralised Online Real-time Electronic PDS) system which has been successful in eliminating any issues created by biometrics or the lack of robust technology. She said,

Beneficiaries in Chhattisgarh’s CORE PDS have been allowed to take their ration from any ration shop by authenticating themselves by any one of the multiple ways. One such way is Smart Ration Card (SRC) issued by the food department which does not require any biometric authentication and works like a regular ATM Card, only to withdraw ration. This doesn’t even require much technology or technical training. The ration shop person inserts the smart card in the PoS device. POS reads the ration card number and sends it to the server through GPRS to get her entitlement balances. The shopkeeper then enters the quantities to be issued to the beneficiary and submits. Server updates the transaction and gives a success report. Thereafter, a receipt is printed and the commodities are issued to the beneficiary. The other methods that allow withdrawing ration under CORE PDS are authenticating via Rashtriya Swastha Beema Yojana (RSBY) card issued by the health department or registered mobile number using One Time Pin (OTP).

Amrita Johri, an activist associated with Roti Rozi Adhikaar Abhiyan, a people’s movement working for the rights of the daily wage workers and urban poor, emphasized on the fact that many times, in case of short-term seasonal migration, only one or two members of the household migrate, leaving the ration card behind for the rest of the family to use. How can migrants draw their ration at the place of work, is still an unsolved puzzle, she said. She said that initiatives like community kitchens providing cooked food at a lower cost like Tamil Nadu’s Amma canteens or Maharashtra’s Shiv Bhojanalyas are a more effective solution to food security issues among seasonal migrants.

It is good to see that the central government is finally recognising that there is a need to revamp the existing PDS. But they are yet to accept that universalising the distribution of food grains is the only way to address hunger. This is because there are still a large number of people excluded from PDS. The government will provide ration to the eight crore migrants who do not possess a ration card, for only two months but that will not solve the problem of food security for them.

She highlighted that while the ‘One Nation, One Ration’ card will provide some relief during the current time of crisis, but it will only help those who have a ration card. She said that most people who have not reached their destination yet, may not be carrying a ration card. She asserted that the government must work towards universalising the distribution of ration so that no one stays hungry considering that the government granaries are overflowing and a large amount of foodgrain goes waste every year.

How To Make A Face Shield At Home To Fight Coronavirus, Actor Sood Shows A Do-It-Yourself Method