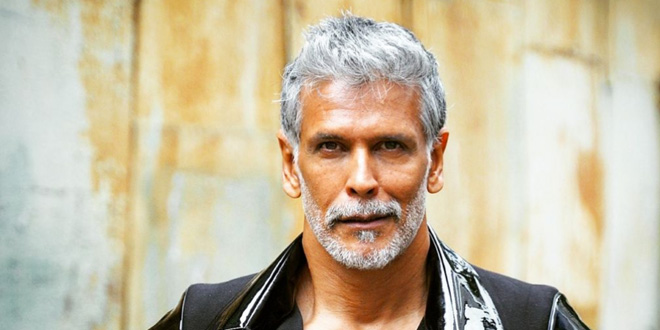 New Delhi: As the world steps into a new year and use it as a new opportunity to start or improve their fitness journey in times of a global pandemic, the team of Banega Swasth India spoke with Milind Soman, actor, supermodel, film producer and fitness enthusiast in a special interview. Mr Soman is known for breaking stereotypes, pushing fitness boundaries and has proved time and again that age is just a number. So, what motivates Milind Soman and what should be learnt from him when it comes to forming a new fitness and health routine this New Year?

In 2012, Mr Soman took the challenge of running from Delhi to Mumbai to raise awareness about health and the environment and what people can do to save the Earth. Earlier this month, he took up another challenge for which he was cycling 1,000 km from Mumbai to Delhi. With this feat, the 56-year-old supermodel aimed to raise awareness about the air pollution caused by vehicles in the country and promote greener means of transport like a bicycle. He said that challenges inspire him. He said,

I like being fit. What motivated me is the feeling of good health, the feeling that I can do whatever I want, whenever I want. For example, I like to challenge myself at least three or four times a year. I thought of doing this cycle ride even though had not sat on a cycle for the past four years. If I was cycling every day, then it was not a challenge but the fact that I have not peddled a cycle in four years made this feat challenging. I want to keep feeling that anything that I think of doing like climbing a mountain or running from another city, I can do it. Challenges motivate me because they reassure me and reaffirm that I am in ‘bull shape’ and that I can do whatever I want.

Taking Care Of Oneself Will Help In Restoring Environmental Health Too, Says Mr Soman

Mr Soman emphasised that if each person starts taking care of themselves and their surroundings, they can contribute towards restoring the health of the environment. He said,

I believe that if we all of did a little bit, made a small effort towards our physical and mental health, we really would not have to face the crisis that we are facing right now when it comes to the environment. But, because of technology and our aspiration for comfort and convenience, we create a lot of pollution. So we need to control those wants. But we have become a consumerist society today. We all know and talk about the fact that we consume and consume and what are we going to leave for our future generations. But I must highlight that it is not about the future generation anymore. It is about the generation that has been born already, our next generation. I don’t think that when they will reach my age or half of my age, they will be able to do what I am doing because their lungs would not be strong enough.

He added that people have now started to realise that humanity is facing an existential crisis because of the climate change caused by human actions. But the actions being taken for protecting the environment taken individually and collectively are not adequate. He said,

We know that the environment is always going to be there, we may not be there. We all have to do our bit to leave a livable atmosphere for the coming generations. Small actions like plogging- picking up garbage while jogging- without thinking who made the mess and just focusing on doing your bit can help make a big difference.

Also Read: 2021: The Reality Of Climate Crisis And Action Against Climate Change

Mr Soman, who has recently started growing his own food himself said that food is key for a healthy body and one must exercise extreme caution in deciding goes inside their bodies. He said that food act as medicine, it should be seasonal, procured locally and consumed in moderate amount. He said,

I started growing food during the pandemic. Obviously, you cannot grow everything that you need but whatever you can do is a step in the right direction. Apart from this, eating locally, eating seasonal, eating whole food, are my priorities. I do eat packaged food sometimes but the priority would be home-cooked and fresh. The simplest tip for better eating is to eat what your grandparent would eat.

He further suggested that people should experiment with food and learn what is good for them. He said,

Food is going to affect your body, your mind, everything in your life. Do not eat something just because it tastes good.

Fitness Can Become A Priority Only If You Realise It Is Important: Milind Soman

According to Mr Soman, fitness can become a part of someone’s lifestyle and a priority only if they have the realization about how important it is to stay fit. People must start taking actions whenever it strikes them that they are not making enough efforts to keep themselves fit and strong, he said, adding that even small efforts every day can make a big difference.

Start with small goals like just one minute of exercise and be regular. Do it every day and gradually intensify, he said.

He highlighted how people from previous generations were stronger because their lifestyle included a lot of physical activities and a healthy diet and asserted that human bodies are not designed for comfort. Mr Soman said,

As humans, we need to understand that our bodies are not designed for comfort. It is made to work hard. So, if you take something that Is designed for something and uses for something else, it is going to deteriorate. It’s going to break down. So, you need to keep working, keep making efforts and keep challenging yourself. Look at previous generations, they were so strong. They were not afraid of walking 40-50 kilometers. It was not something to be considered and they could just do it. But we cannot think of even driving that much now. So that is how weak we are, not only physically but also mentally. We are also weak emotionally because we have distanced ourselves from the toughness that is required to face the life. We have this illusion of comfort and convenience but we need to really understand that we are built to face challenges.

He said that in the last 10 years is has observed that people are becoming aware of the importance of being fit and healthy. He added that India has the largest and fastest growing running community in the world. However, according to him, men have been dominating the running events and there has been less participation from women. This prompted him to start ‘Pinkathon’, a running event only for women with an aim to encourage them to come out and dedicate some time for their own health.

If you do something for your physical health, it obviously impacts your mental health in a good way and good mental health will help you take better decisions in life. You can make right choices with a stronger mindset and those choices will impact the environment too. I keep telling people that we do not have to think a lot about the environment, we just need to start making good choices for ourselves each and every day.

Also Read: Dia Mirza On Why We Need To Act Now On Climate Crisis

Opinion: Have A Healthy New Year 2022, Strengthen Your Defence Against COVID-19