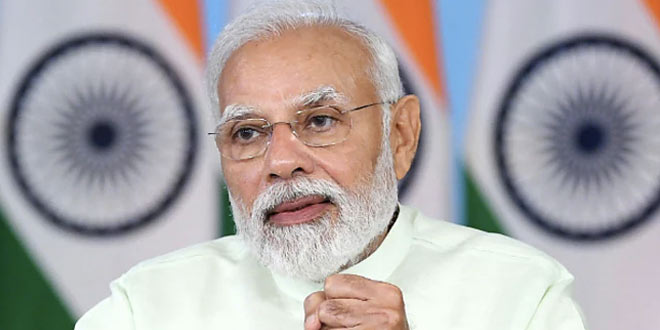 PM Modi was addressing via video conferencing a programme at Vanthali in Gujarat's Junagadh district.

Ahmedabad: Prime Minister Narendra Modi on Sunday said the coronavirus has not gone away and keeps resurfacing, and cautioned people not to let their guard down in the battle against the pandemic. Nobody knows when the ‘bahurupiya’ (one that changes form) COVID-19 will resurface, PM Modi said, adding that administering nearly 185 crore doses of vaccines to control its spread was made possible due to public support.

He was addressing via video conferencing the Mahapatotsav programme of Maa Umiya Dham at Vanthali in Gujarat’s Junagadh district, as part of the 14th foundation day celebration of the temple of Maa Umiya, considered as the deity of Kadva Patidar community.

The PM urged devotees of Maa Umiya to turn to natural farming with the aim to save Mother Earth from the scourge of chemical fertilisers.

He also asked people to a pledge to participate in creating 75 ‘Amrit Sarovars’ (lakes) in each district as part of the Azadi Ka Amrit Mahotsav, being organised to mark 75 years of India’s Independence.

Corona (COVID-19 pandemic) was a big crisis, and we are not saying that the crisis is over. It may have taken a pause, but we never know when it will resurface. It is a ‘bahurupiya’ disease. To stop this, nearly 185 crore doses (of vaccines) were administered, which surprised the world. This has been made possible due to your support, he said.

The PM also said the devotees of Maa Umiya should undertake a project to take care of the health of malnourished children and anemic mothers at the village level.

The ‘Maa Umiya Trust,’ which manages the temple, should organise competitions at the village level promoting good health of children, he said.

The devotees of Maa Umiya should ensure no child suffers from malnutrition, irrespective of which community he/she belongs to. If a child is strong, then the community and the country will become strong, he said.

The prime minister also said the awareness against female foeticide has resulted in the country’s daughters showing their might in the Olympics. “Who will not take pride in our daughters?” he added.

PM Modi also requested people to support the government’s campaign to save Mother Earth through adoption of natural farming, and continue the work to conserve water.

People should support Gujarat Chief Minister Bhupendra Patel by responding to his call for the same, he said.

Let us undertake the project of 75 lakes in each district…It’s not a big deal for you all who have made lakhs of check dams. Imagine how big a service this will be, he said.

The PM said people who have faced severe water crisis should not give up the practice of water conservation, regardless of the success achieved in this field.

This is something that needs to be undertaken every year before monsoon by deepening of lakes and cleaning of water channels to conserve water, he said.

Over 9,500 Precaution Doses Of Covid Vaccines Given On Sunday: Centre

COVID-19 Pandemic: Mask Mandate May Not Be Necessary For Now, Say Experts