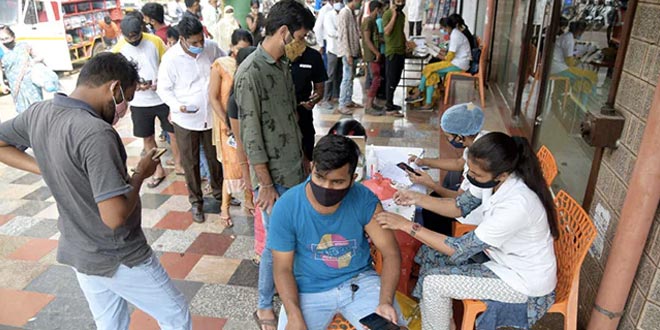 Delhi is witnessing a spurt in COVID-19 cases over the past few days with the number of active cases increasing to 3,975 from 601 on April 11

New Delhi: The number of coronavirus patients in home isolation in the national capital has seen an over six-fold increase from 447 on April 11 to 2,812 on April 24, according to official data. The number of patients admitted in hospitals also increased from 17 to 80 during the period. However, the Delhi government has assured people that despite the rise in cases, the hospitalisation rate has remained low. The city is witnessing a spurt in COVID-19 cases over the past few days with the number of active cases increasing to 3,975 from 601 on April 11.

The hospitalisation rate, however, has so far been low, accounting for less than three per cent of the total active cases, according to the data.

Chief Minister Arvind Kejriwal has been reiterating that even though the cases have risen, the hospitalisation rate has been low.

The numbers crossed the 1,000 mark on April 18 to settle at 1,188 and and to 1,274 the next day. As many as 1,574 patients were recuperating in home isolation on April 20 while the numbers inched close to the 2,000 mark the next day. While cases have seen a rapid increase, the number of containment zones has more or less remained constant and has not seen any significant increase, the official data shows. The number of such zones has declined from 741 on April 11 to 656 on April 24.

The number of daily Covid cases in Delhi had touched the record high of 28,867 on January 13, during the third wave of the pandemic.

The city had recorded a positivity rate of 30.6 per cent on January 14, the highest during the third wave, which was largely driven by the highly transmissible Omicron variant of the coronavirus. Experts have attributed the rise in cases to human behaviour and said that there is little reason to worry, as most of the population has immunity either because of vaccinations or previous infections.

The Delhi government had lifted the mask mandate earlier this month but within three weeks brought it back making it mandatory for people to wear masks at public places and imposed a fine of Rs 500 for violation.

Unvaccinated People Increase COVID-19 Risk For Those Who Are Vaccinated: Study