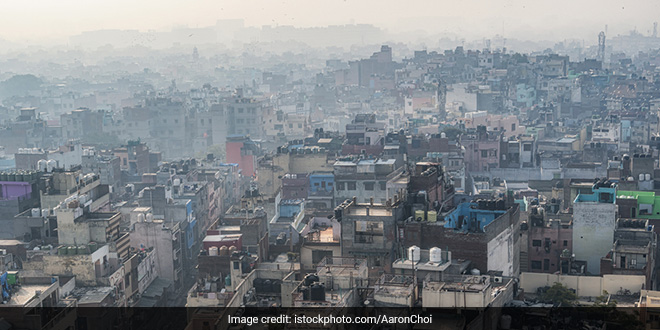 New Delhi: Delhi’s air pollution levels ameliorated marginally to the lower end of the “very poor” category on Sunday, following which the Centre’s air quality panel lifted the fresh curbs imposed three days ago. Restrictions under stages 1 to 3 of the Graded Response Action Plan (GRAP), will, however, remain in place. The plan is a set of anti-air pollution measures followed in the capital and its vicinity according to the severity of the situation.

The Commission for Air Quality Management (CAQM) directed authorities to lift the ban on plying of non-BS VI diesel-run light motor vehicles in Delhi-NCR and entry of trucks into the national capital imposed under the final stage (stage-4).

Delhi Environment Minister Gopal Rai will chair a high-level meeting on Monday to discuss the new directions by the air quality panel and a decision on reopening primary schools and revocation of the order asking 50 per cent of government staff to work from home is also likely to be taken, according to Delhi government officials.

Experts said “knee jerk reactions” such as revoking curbs could prove to be a hasty decision and advised caution.

The 24-hour average air quality index (AQI) on Sunday (November 6) stood at 339 at 4 pm, dropping from 381 a day ago. It was 447 on Friday, according to the Central Pollution Control Board. It had jumped to 450 on Thursday, just a notch short of the ‘severe plus’ category, prompting authorities to invoke the final stage of anti-pollution curbs, including a ban on non-BS VI diesel light motor vehicles.

The hazardous pollution levels prompted the Delhi government to announce on Friday that primary schools would remain shut from Saturday and 50 per cent of its staff will work from home, while private offices were advised to follow suit.

The number of farm fires in Punjab have also dropped sharply to 599 from 2,817 a day ago, data from the Indian Agricultural Research Organisation (IARI) showed.

The smoke from farm fires are carried to the national capital region (NCR) by transport-level winds that blow in the lowest two layers of the atmosphere — the troposphere and stratosphere. The share of stubble burning in Delhi’s PM 2.5 pollution has declined to 18 per cent from 21 per cent on Saturday, according to SAFAR, a forecasting agency under the Ministry of Earth and Sciences.

PM2.5 are fine particles that are 2.5 microns or less in diameter and can travel deep into the respiratory tract, reaching the lungs and entering the bloodstream.

The CAQM in an order said,

As the present AQI level of Delhi is around 339 which is about 111 AQI points below the threshold for invoking the GRAP stage-4 actions (Delhi AQI > 450) and preventive/ mitigative/restrictive actions under all stages up to stage-4 are underway, there is a likelihood of sustaining the improvement in AQI.” “The forecast by IMD/IITM also does not indicate any steep degradation further, it said.

GRAP stage-4 is a stage of disruptive restrictions that impacts a large number of stakeholders and the public at large. There are no stricter measures, than as laid in this stage that could be taken to improve upon the air quality scenario, the commission said.

“The sub-committee, accordingly, hereby decides to revoke the order, issued vide dated November 3, 2022, for actions under stage-4 of GRAP with immediate effect,” it said.

Actions under GRAP stages 1 to 3 will, however, remain invoked and be implemented, monitored and reviewed by all agencies concerned in the entire NCR to ensure that the AQI levels do not slip further to the ‘severe’ category.

Environmentalist Vimlendu Jha said it could be too soon to revoke curbs as the air quality has improved a wee bit due to favourable wind speed and will go back to severe category in a couple of days.

These are knee jerk reactions and should be avoided. It will be too soon to do away with the restrictions. The government should instead analyse the situation and bide some time before revoking the curbs because this situation will be there for a long time, he said.

With a call still expected on reopening of schools, parents also demanded the government to take some steps to ensure that children do not face learning losses. Aparajita Gautam, president of the Delhi Parents’ Association, questioned for how long will children face this uncertainty.

What will the parents do? I am ready to send my child to school if the air quality improves but instead of working to curb pollution now, the government should take year-long measures to reduce it. When the air quality has entered the severe category, we had demanded school closure, she said.

Health Must Be Front, Centre In COP27 Climate Change Talks: WHO