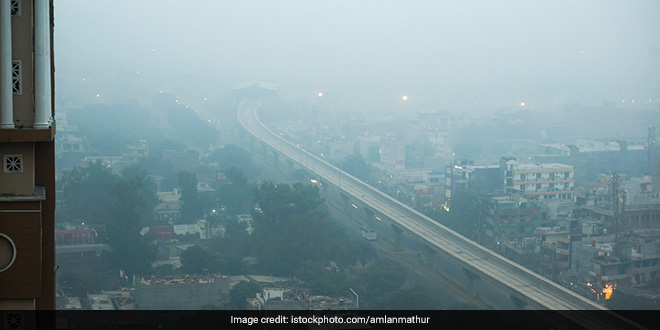 According to the weather / meteorological forecast experts, the overall air quality over Delhi is likely to remain in 'Severe'/ 'Severe+' category from November 3 to 5

New Delhi: On Friday (November 4), the air quality further deteriorated in the National Capital – Delhi with nearly all monitoring stations in the city reporting an air quality index in the ‘severe’ category. According to SAFAR, a forecasting agency under the Union Ministry of Earth Sciences, the overall AQI in the capital stood at 472. According to the weather / meteorological forecast experts, the overall air quality over Delhi is likely to remain in the ‘severe’ or ‘severe+’ category from November 3 to 5. Amid the alarming level of air quality in the National Capital Region, the Commission for Air Quality Management on Thursday (November 3) decided to implement Stage IV of the Graded Response Action Plan (GRAP) with immediate effect.

The following are the measures prescribed under stage IV:

1. The use of four-wheeled diesel light motor vehicles in Delhi-NCR is not allowed under this plan

2. Entry of trucks in Delhi NCR has been halted

3. Construction and demolition work in linear public projects such as highways, flyovers, overbridges, power transmission, and pipelines in Delhi-NCR have been stopped and a ban has been put in place for such activities in this plan

4. An order for the closure of all industries that are not running on clean fuels in NCR has been passed

For now, a decision on the closure of schools, colleges, educational institutions, and non-emergency commercial activities has not been taken, but it may be on the cards if the air pollution continues to further worsen. The same is the case with driving vehicles on an odd-even basis.

1. All CNG vehicles are allowed for now

2. The entry of electric trucks or e-vehicles has not been halted in this plan

3. The entry of trucks carrying essential commodities or providing essential services are also allowed to operate in the NCR

5. Industries like milk and dairy units and those involved in manufacturing life-saving medical equipment, drugs, and medicines have been exempted from restrictions

According to a report by Greenpeace India, over 99 per cent of India’s population is breathing air that exceeds the World Health Organisation’s health-based guidelines with respect to PM2.5. According to the key findings in the report titled “Different Air Under One Sky”, the greatest proportion of people living in India are exposed to PM2.5 concentrations more than five times the WHO annual average guideline. It further said 62 per cent of pregnant women in the country live in the most polluted areas, compared to 56 per cent of people in the whole population. It also listed older adults, infants and pregnant women as the most vulnerable groups who are “exposed to worse air”. As per the study published in the journal, ‘JAMA Internal Medicine’, people with lung disease are more likely to die if they live in areas with higher levels of air pollution composed of chemicals associated with industrial sources and vehicular traffic. Another study led by a team of researchers from the University of Southern California (USC), US recently stated that exposure to air pollutants, in particular fine particles (PM2.5) and nitrogen dioxide (NO2), increased the risk of hospitalisation in COVID-19 patients by up to 30 per cent, even for the fully vaccinated.