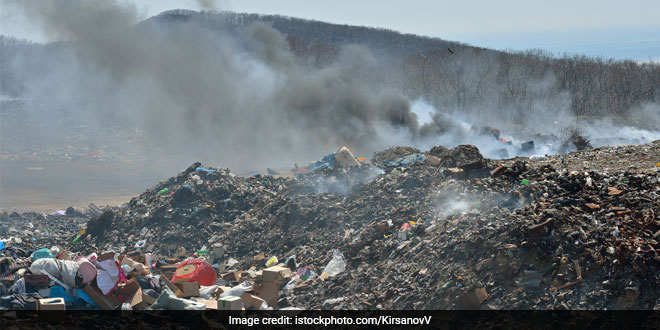 New Delhi: Firefighters struggled to douse a fire at the Bhalswa landfill site in north Delhi for the third straight day on Thursday with officials saying that it will take at least another day to put it out completely. Four fire tenders are currently working to bring down the flames, the officials said. A massive fire broke out at the Bhalswa landfill site on Tuesday evening. Several videos showed the blaze churning out dense plumes of smoke and turning the sky hazy grey. Local residents said on Wednesday the thick smoke was choking them.

Currently, four fire tenders are working at the site. It will take at least one more day to douse the fire. Our teams are working round the clock to put it out, a fire official said. The residents have started complaining of sore throat, itchy eyes and breathing problems, the official said.

The cause of the fire is yet to be ascertained.

Another official said rising temperatures lead to the formation of the “extremely flammable” methane gas at dumping yards.

Delhi Environment Minister Gopal Rai on Wednesday blamed “corruption” in the municipal corporation for the frequent fires at landfills in the city, saying the BJP-ruled civic bodies should have used bulldozers to clear the mountains of garbage.

Gyan Sarovar School, a child resource centre for children of ragpickers living near the Bhalswa landfill site, has been closed for a week as thick smoke enveloped the area.

Three incidents of fire have been reported this year at east Delhi’s Ghazipur landfill site, including one on March 28 which was doused after over 50 hours.