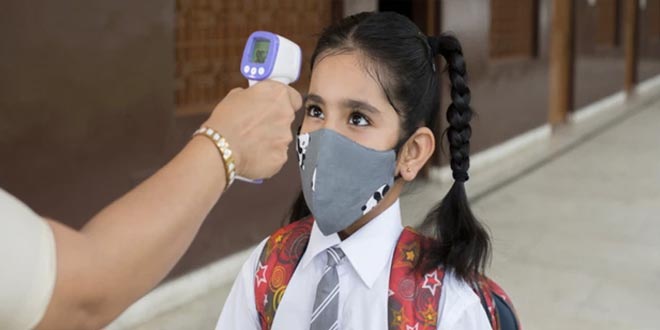 New Delhi: The Delhi government will issue fresh guidelines for schools amid reports of a few students testing positive for COVID-19 across the national capital and NCR. Noting a “slight” rise in COVID cases, Delhi Deputy Chief Minister Manish Sisodia said he has directed the education department to issue guidelines on Friday in this regard. However, both Chief Minister Arvind Kejriwal and Sisodia maintained the government is closely monitoring the situation, and asked people not to panic as there is no rise hospitalisation.

COVID cases have slightly increased but there is no rise in hospitalisation, so we need not worry. There is no need to panic but (we have to) stay alert. We have to learn to live with COVID. We are constantly monitoring the situation. I have got reports from a few schools in the past few days where parents have informed about their child testing positive. The education department will tomorrow issue guidelines to schools in this regard, Mr Sisodia told reporters.

Delhi on Wednesday reported 299 new COVID-19 cases, a jump of 118 per cent in two days. The positivity rate stood at 2.49 per cent, according to data shared by the city health department.

Reports of infections from schools have sparked concerns weeks after they opened for completely offline classes after a two-year gap due to the pandemic. Kalkaji MLA and senior AAP leader Atishi said,

There are reports of a child and a teacher testing positive for Covid. Other students of the class have been sent home. We are closely tracking the situation.

However, she did not specify the name of the school where cases have been reported.

The fresh infections in the privately-run schools in the national capital have been reported close on the heels of schools in adjoining Noida and Ghaziabad reporting new cases.

As students across Delhi-NCR turn Covid positive, schools are struggling with protocols. My child’s school has at least 8 kids, 2 staff members positive. But no proper info given to parents, school functioning normally, even those classes with positive cases, said a parent from a top private school in Vasant Kunj.

Schools in Delhi have four days holidays starting Thursday on account of Ambedkar Jayanti, Good Friday followed by a weekend.

The Delhi BJP demanded that in view of the rise in cases, the government should once again make masks mandatory at public places including public transport, schools, colleges and cinema halls.

COVID-19 Pandemic Continues To Be A Public Health Emergency Of International Concern, Say WHO Experts