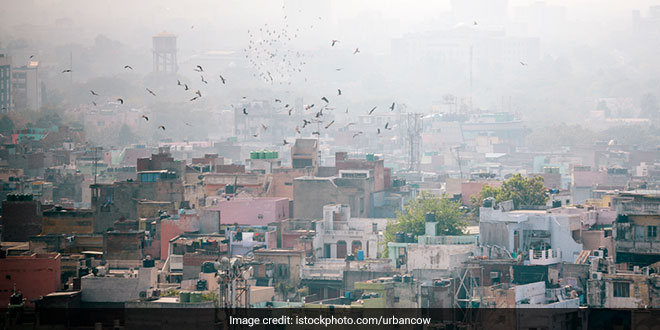 Air Quality Index in Delhi has come down from 'severe' to 'very poor' category and is likely to improve further, as per SAFAR

New Delhi: The air quality in the national capital continued to remain under the “very poor” category on Wednesday (November 10) with the Air Quality Index (AQI) standing at 382, as per the System of Air Quality and Weather Forecasting And Research (SAFAR). “AQI today remains in ‘Very Poor’ category. Winds coming from the north west direction at 925millibars (mb) have slowed down but are favourable for transport of stubble related pollutants to Delhi”, said SAFAR, the forecasting body under the Ministry of Earth Sciences.

However, its impact on Delhi’s PM2.5 is reducing gradually. Today’s share of crop residue burning is 27 per cent in PM2.5. AQI is likely to improve further but remains in the very poor category due to partially cloudy conditions and shallow mixing layer height, it added.

Due to persistent pollution in Delhi’s air, the residents of the national capital complained about rising health problems. Payal Sakariya, a cyclist from Sarita Vihar Delhi , “Living in Delhi is like living in pollution. Cannot escape that. Pollution is less this year and from last 2-3 days, it is gradually decreasing. Congestion, nose block, breathlessness are a few symptoms that I face but it is better to stay outside than to remain home.”

She said that number of cyclists in Delhi has also decreased due to the rise in pollution levels. I noticed more than usual cyclers the day before yesterday. As an individual, I do carpool and do not burn crackers. But the government should take measures to control the situation, she added.

I think the major reason behind increasing pollution at this time is stubble burning, cracker burning and inadequate rains. Both Delhi and the Central Government should work together to control the pollution. Due to the use of CNG as a fuel in vehicles, they do not contribute much to pollution,  added Mr Narayan.

Saurabh from Delhi Elite cyclist group said, The AQI here is over 300 so we have come outside today and will do low-intensity activities keeping in view the air quality and pollution. There are a few factors that have spiked pollution in Delhi, such as factories, vehicles, cracker burning, stubble burning, labours are cooking food using wood. The AQI is comparatively better than the last year.”