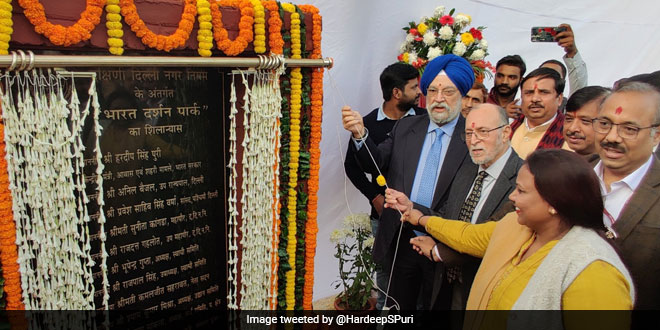 New Delhi: In 2019, Delhi’s one-of-a-kind park ‘Waste to Wonder’ was opened, which is home to the replicas of some of the world’s best monuments made from waste materials like the old bench, typewriter, scrap metal, retrieved from Delhi’s landfills. Impressed by the response to this park, the South Delhi Municipal Corporation has now once again decided to establish a similar kind of park this year itself using just waste materials, only this time the park will host famous heritage sites of India.

Union minister Hardeep Singh Puri had recently laid the foundation stone for what is being called as Delhi’s ‘Bharat Darshan Park’ in Punjabi Bagh.

Sincere efforts are being made towards cleanliness with an aim to fulfill the PM Shri @narendramodi Ji’s Swachh Bharat Mission.

I was delighted to join @LtGovDelhi for the foundation stone laying ceremony of Bharat Darshan Park at Punjabi Bagh. pic.twitter.com/oKM7mooueW

Delhi’s first Waste To Wonder Park which is situated near Sarai Kale Khan Inter-State Bus Terminus became exceptionally famous as it was one-of-a-kind of the initiative. We decided to follow IN the same footsteps and create a park with replicas of famous Indian monuments such as Charminar, Gateway of India, Konark Temple, Nalanda ruins, Mysore Palace, Golden Temple, Meenakshi Temple, Hawa Mahal, Hampi ruins, Victoria Memorial, Sanchi Stupa, Gol Gumbaz, Ajanta Ellora Caves and Junagarh Fort, among other sites. All fashioned out of metallic waste and scrap materials.

The SDMC Commissioner also said that the park will be developed on a six-acre plot and the entire project is estimated to cost around Rs 18-20 crore. He adds,

Through this project, the SDMC seeks to widen its ambit of ‘waste-to-wealth’ concept. The replicas in ‘Bharat Darshan Park’ will be built using scrap waste such as vehicles, fans, rods, iron sheets, nuts and bolts and even the dust. The park complex will be made in an eco-friendly and self-sustainable manner with its own solar and wind power generation.

Apart from these features, the park will have a walking track of 1.5 km, a children’s play area, waterfalls, fountains, ponds, amphitheatres for cultural events, a food court offering major cuisines of India and photography stall.

Highlighting the water usage and waste management in the park, an official added, “All water usage will be from existing Sewage Treatment Plant on-site, and all organic waste will be reused in waste-to-energy conversion at the existing 5 tonnes per day plant on site.”

Hardeep Singh Puri while laying the foundation stone for the park said that he sincerely hopes that the SDMC will come up with more such projects, which will not only attract people but also be self-sustained.

He also urged other civic agencies to follow these kinds of initiatives based on the waste-to-wealth concept.