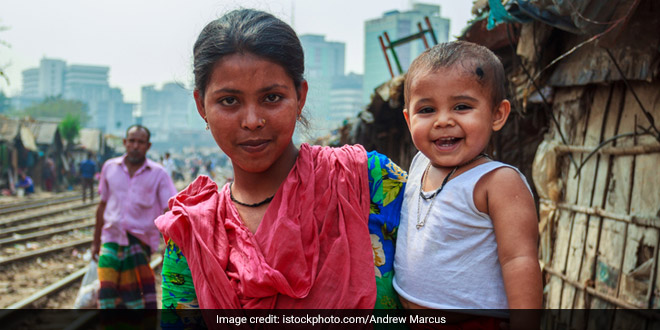 New Delhi: In 2017, Chief Minister Mamata Banerjee announced that under-nutrition and anaemia amongst children and women will be reduced in the state in a targetted manner by the year 2020. For this, the government of West Bengal launched a state-level nutrition mission. However, the recently released findings of the phase-1 of the National Family Health Survey 2019-20 (NFHS-5) covering 17 states and five Union Territories (UTs) have highlighted a reverse trend in the gains made towards tackling malnutrition among children in the state. But, the survey also talks about the improvement in infant and child mortality rates and immunisation, an indication of improvements made in public health services and mother and child care in the state. NFHS-5 data collection for West Bengal was conducted from June 21 , 2019 to November 8, 2019, covering 18,187 households, 21,408 women, and 3,021 men. In NFHS-4, information was gathered from a sample of over 15,327 households, which covered 17,668 women, and 2,402 men.

Here are some of the major health indicators that show the achievements of the state and the challenges facing it:

The NFHS-5 data shows a declining trend in Infant Mortality Rate (IMR), which is the number of babies less than one year of age dying per 1,000 live births, and Under Five Mortality Rate (U5MR), which refers to the number of children dying before reaching the age of five years per 1,000 live births. According to Dr. Pritam Roy, Data Analyst and Public Health Expert from West Bengal, the improvement in the infant and child mortality rates reflect a progress in the state’s healthcare facilities for mothers and children. 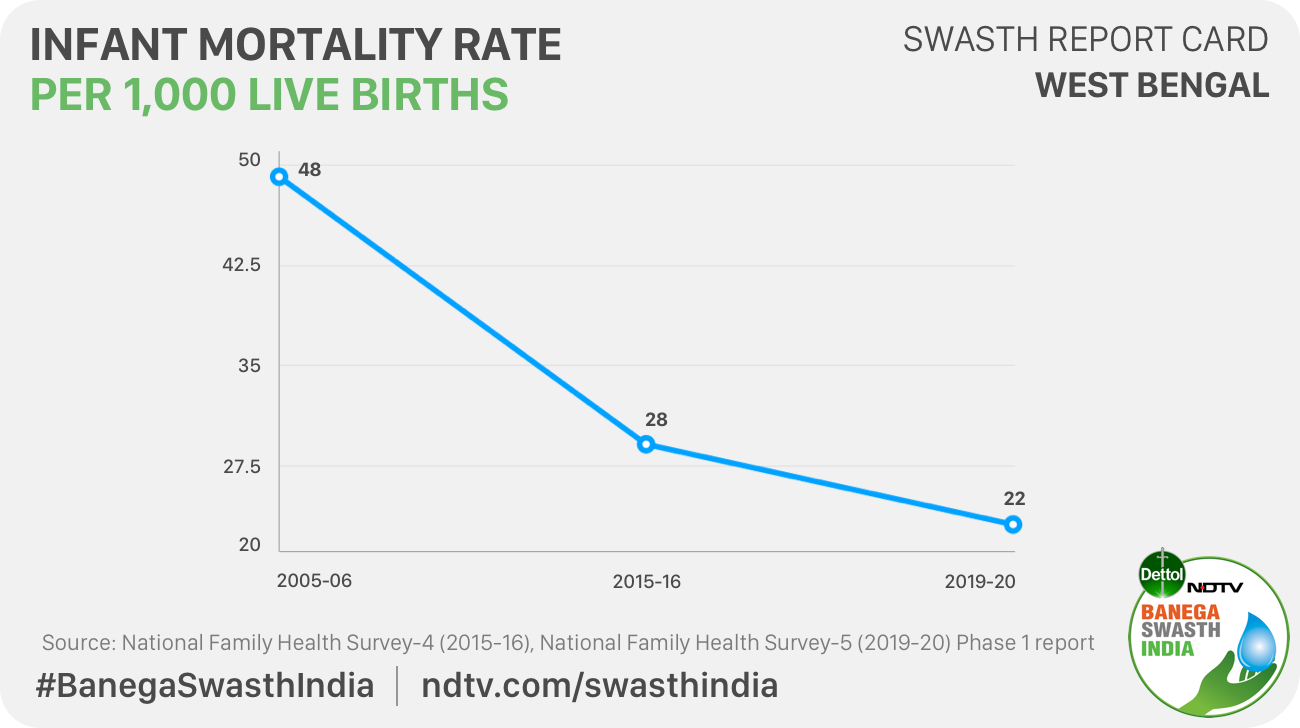 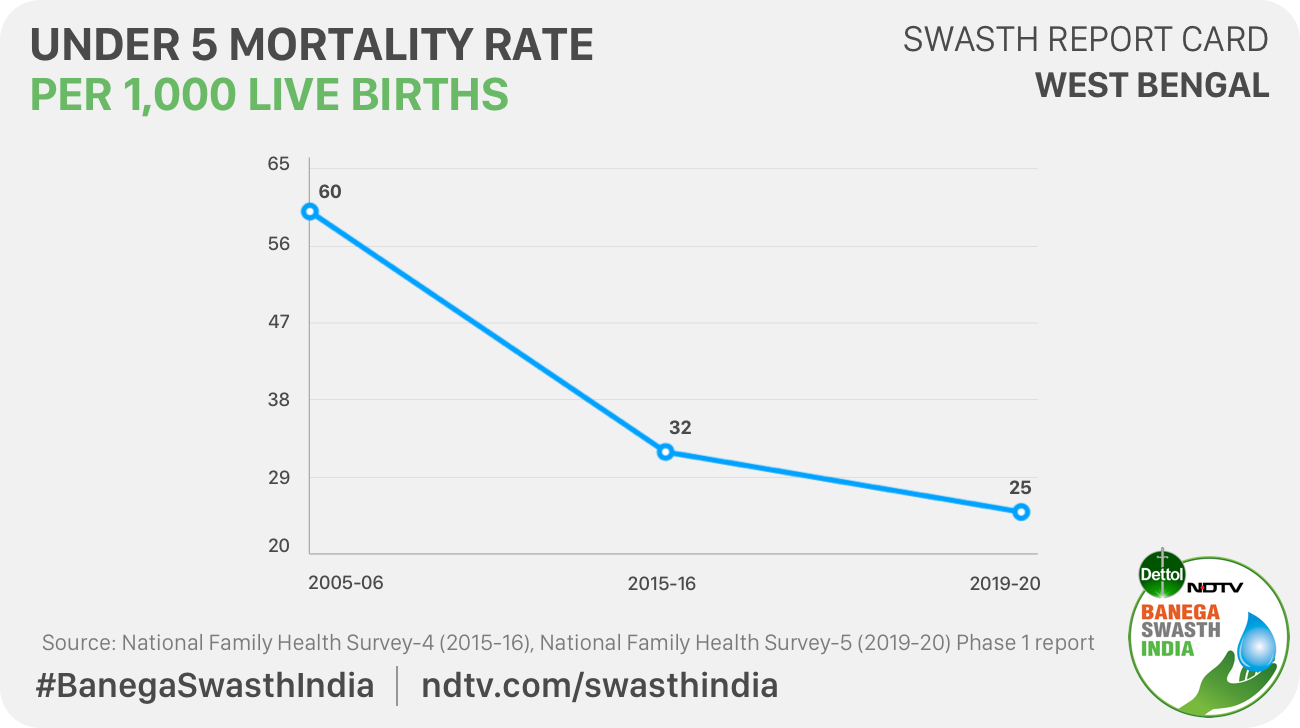 Dr. Roy attributed the decline in mortality rates to various programmes implemented by the state and central governments like India Newborn Action Plan, Integrated Global Action Plan for the Prevention and Control of Pneumonia and Diarrhoea (GAPPD), Home Based Newborn Care and Home Based Young Care (HBYC), Programme Mother’s Absolute Affection (MAA), and Navjat Sishu Suraksha Karyakram (NSSK) Facility Based Newborn Care. In a bid to increase the healthcare for new mothers and babies, the state government is also setting up of Mother and Child Hubs in various districts. The aim of these hubs is to ensure quantitative and qualitative improvement in maternal and child health.

NFHS-5 data also shows that institutional deliveries increased significantly in the state from 75.2 per cent in 2015-16 to 91.7 per cent in 2019-20. According to Dr. Roy, this is also one of the factors contributing to the drop in the mortality rate among infants.

According to the survey, there has been an improvement in full vaccination coverage among children aged 12-23 months, among those surveyed in West Bengal. It has increased from 84.4 per cent in NFHS-4 to 87.8 per cent in NFHS-5. 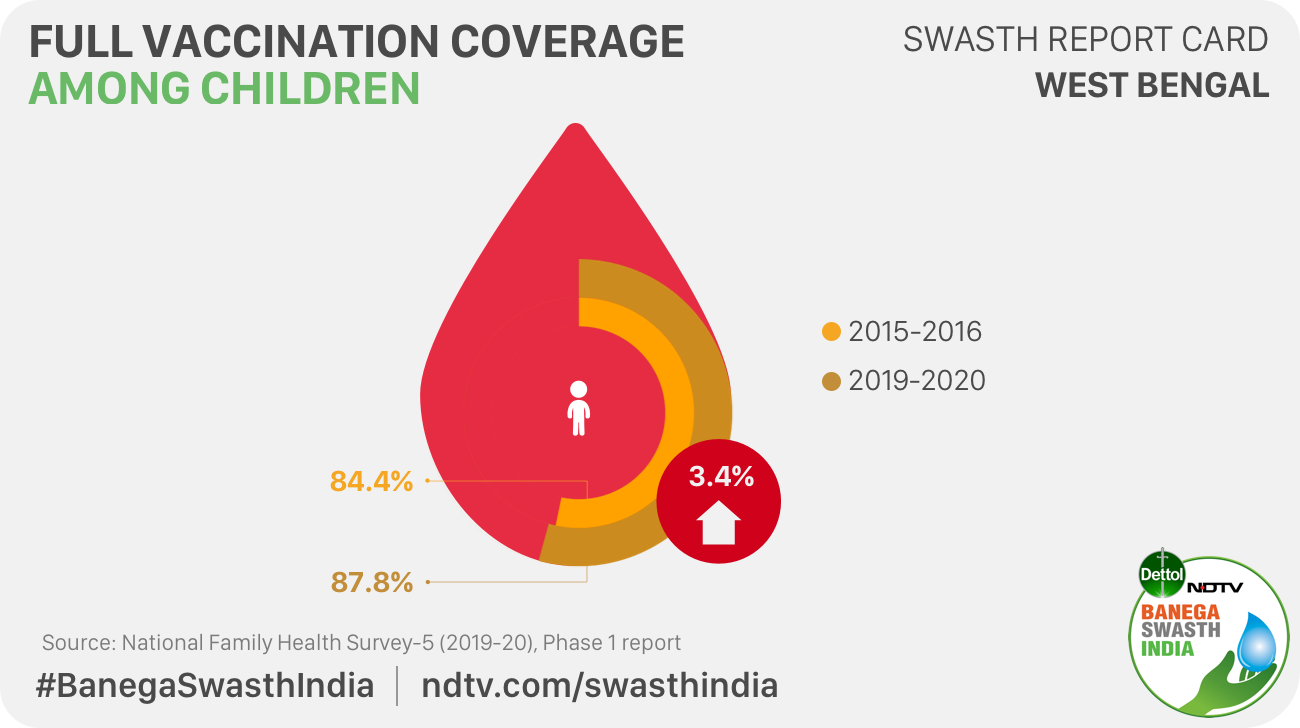 According to the Ministry of Health and Family Welfare, full immunisation implies vaccinating children with BCG (Bacille Calmette-Guerin) which is a vaccine for tuberculosis (TB), vaccines to prevent measles – MMR (measles, mumps, and rubella) and three doses each of polio (excluding polio vaccine given at birth) and DPT (diphtheria, pertussis, and tetanus).

Infant And Child Feeding Practices Improved Over The Past Five Years 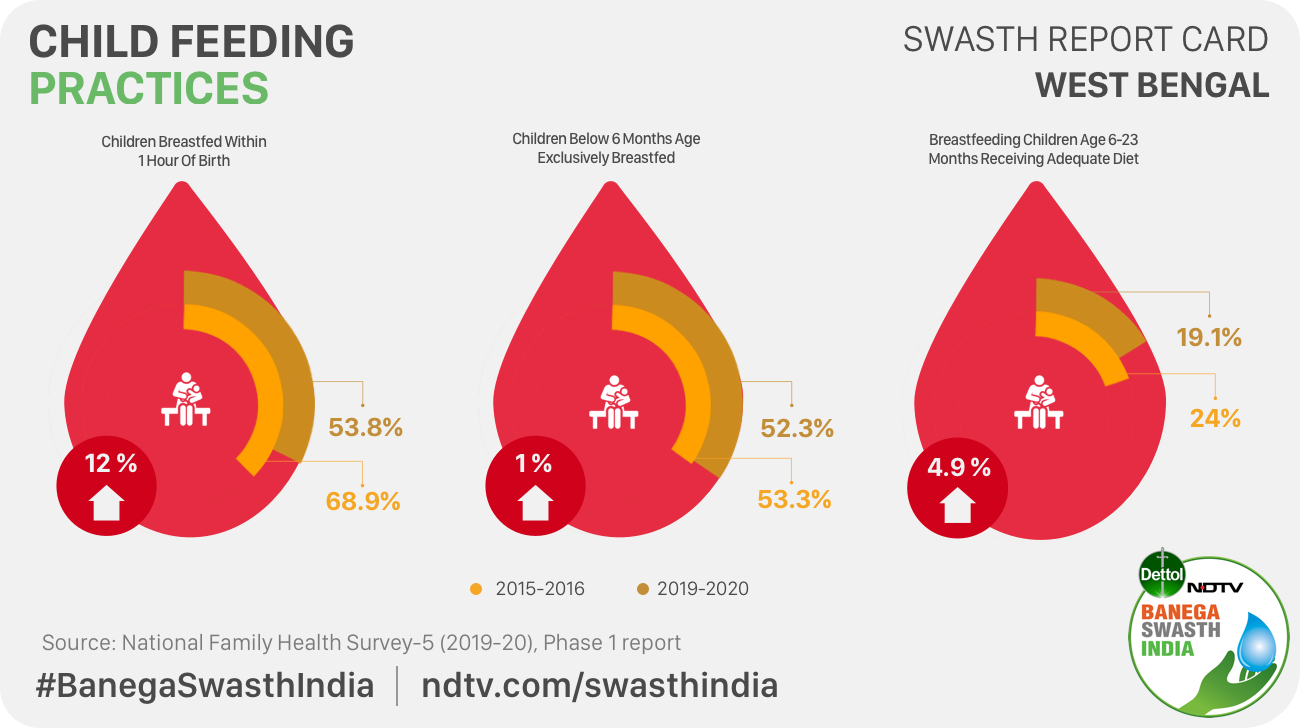 Similarly, there has been a gain in the proportion of breastfeeding children in the age group 6-23 months receiving an adequate diet from 19.6 per cent in NFHS-4 to 23.4 per cent in NFHS-5.

Malnutrition: Gains Made In NFHS-4 Reversed In NHFS-5

According to the report, the proportion of the children under five years of age, among those surveyed, who are malnourished increased in West Bengal in 2019-20 as compared to 2015-16. NFHS-4 had reported an improvement in the proportion of children who were stunted or had low-height-for-age as it declined by 12.1 per cent from 45 in NFHS-3 (2005-06) to 32.5 per cent. However, stunting has now increased to 33.8 per cent, as recorded by NFHS-5. Stunting, as per Dr. Shweta Khandelwal, Head, Nutrition Research and Additional Professor, Public Health Foundation of India, reflects chronic undernutrition and is likely to have long-lasting adverse effects on the cognitive and physical development of a child. 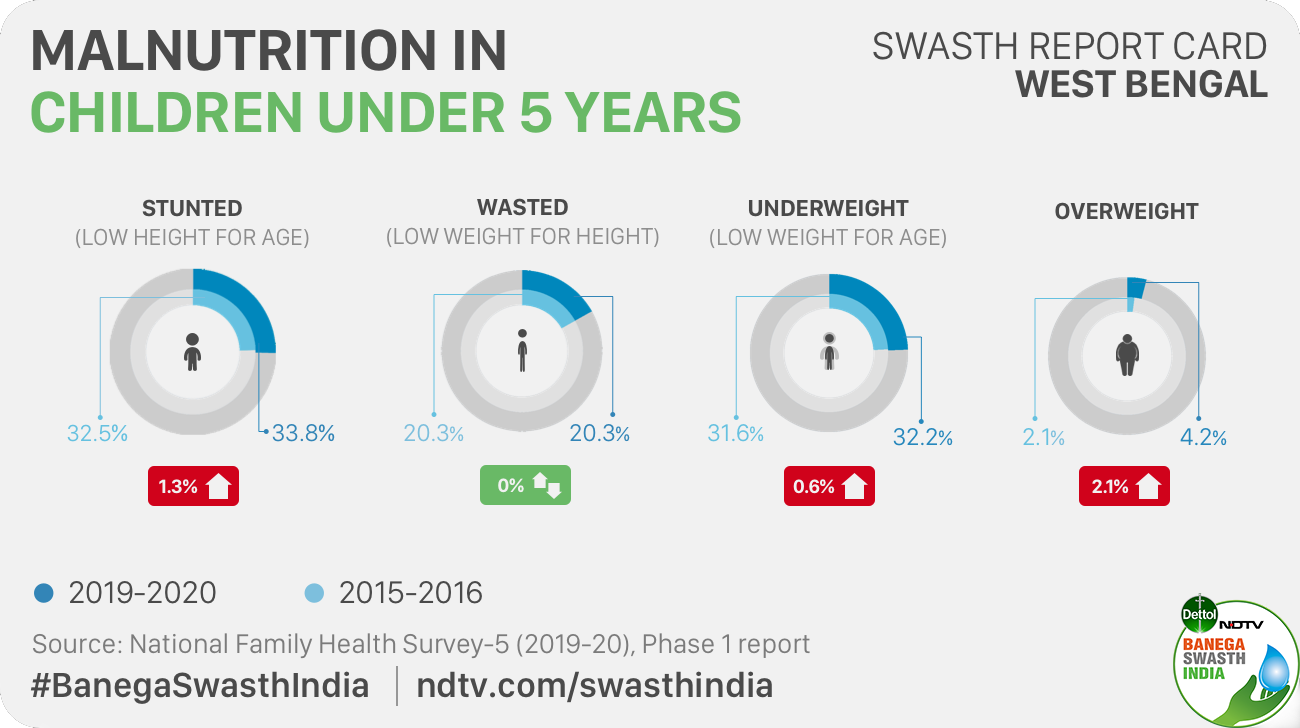 Child wasting reflects acute undernutrition and refers to children who have low weight for their height. This parameter has remained stagnant in the state at 20.3 per cent. However, the proportion of severely wasted children has increased from 6.5 per cent in NFHS-4 to 7.1 per cent in NFHS-5.

When it comes to the proportion of underweight children, West Bengal has again seen an increase. While about 31.6 per cent of the children surveyed were underweight in 2015-16 which was an improvement from the NFHS-3 figure of 38.7 per cents, the proportion increased to 32.2 per cent in 2019-20.

Also Read: In COVID-19 Times, This West Bengal NGO Provides Relief To Those Battling The Challenges Of The Pandemic

High Prevalence Of Anaemia Among Women And Children

Like almost all other states, anaemia among children and women remain a matter of concern in West Bengal. Anaemia is a condition that is marked by low levels of haemoglobin in the blood which leads to reduced oxygen flow to the body’s organs. The percentage of anaemic children aged between six and 59 months, increased from 54.2 in NFHS-4 to 69 in NFHS-5. 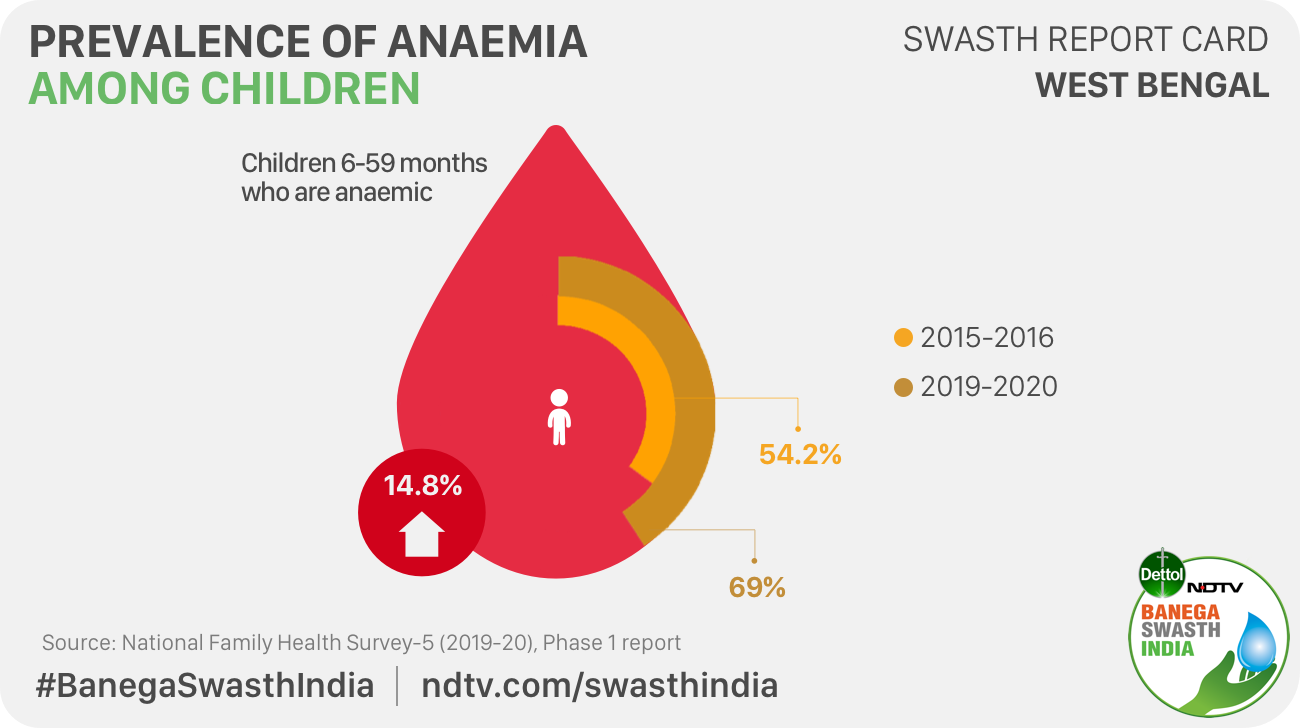 Anaemia has increased among children in West Bengal 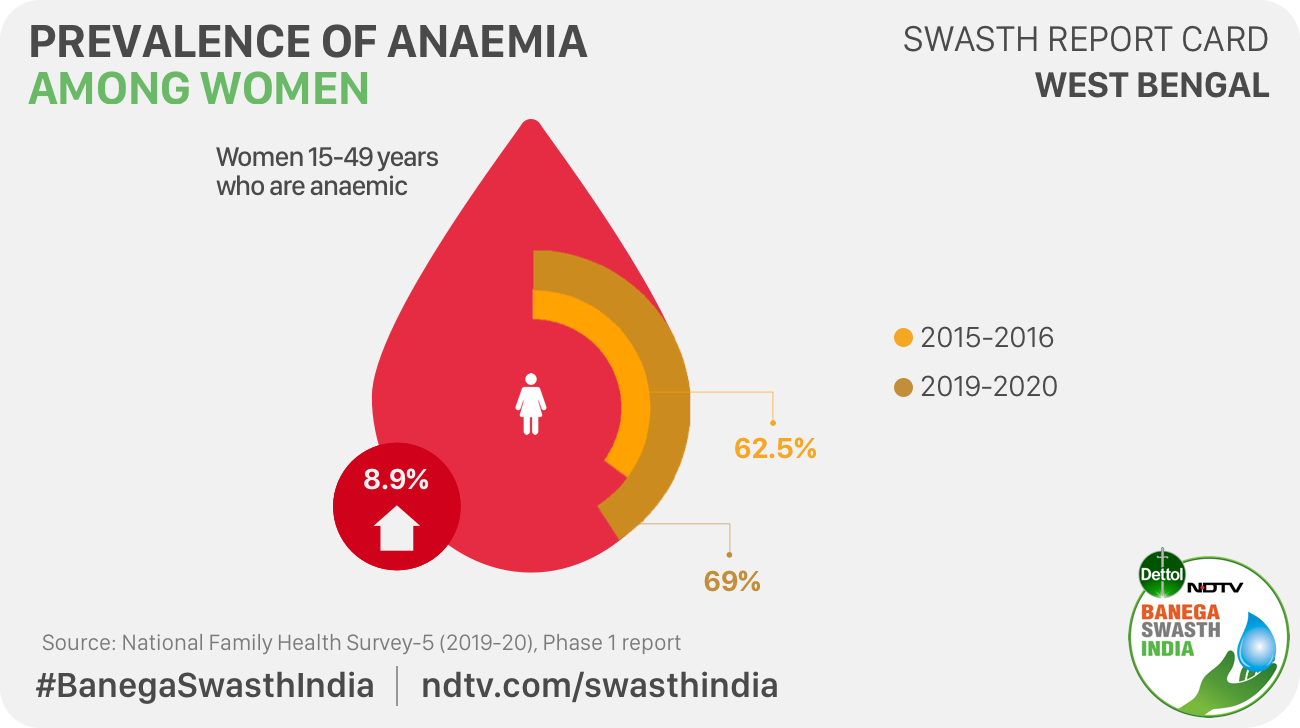 Anaemia has increased among women in West Bengal

The condition of Anaemia has worsened among men as well. As per NFHS-5 data, around 39 per cent of men interviewed in the survey were anaemic which is 8.7 per cent more than 30.3 per cent recoded by NFHS-4. 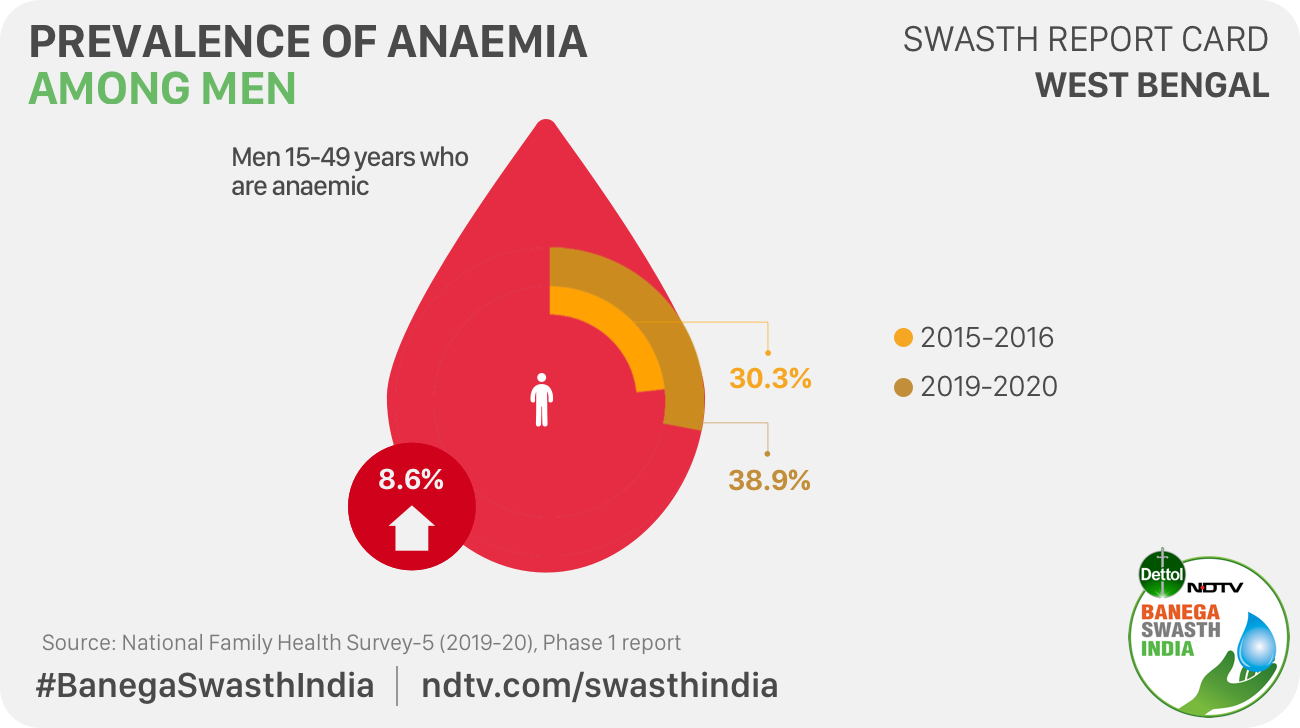 Anaemia has increased among men in West Bengal

While talking about the status of malnutrition and rising anaemia in the state, Dr. Ajay Chakraborty, Director Health Services, West Bengal said,

On one hand, health service indicators such as mortality rates, vaccination show improvement, NFHS-5 indicates worsening of malnutrition among children. While we have to accept this as a fact that malnutrition is a big problem in the state as in the rest of the country, the data does not provide any causes of the rise in under-nutrition. We need more micro-level data to understand this. Another contradictory point that we are yet to decipher is that the survey data shows an increase in the iron-folic acid intake by the pregnant women from 6 per cent in NFHS-4 to 30 per cent in NFHS-5, but the recent findings also show an increase in anaemia among pregnant women. We are still waiting for further explanation on the findings and simultaneously, we are working on strategies to address any gaps in the implementation of healthcare programmes.

Dr. Roy said that on ground, the health schemes being implemented by the state government have increased coverage over the last few years; however, there is a need to modify strategies to achieve better health outcomes. He highlighted that NFHS-5 has presented pre-COVID data and the scenario may have worsened due to the pandemic and the lockdown induced by it.

NFHS-5 has revealed an uptick in menstrual hygiene among women between 15 to 24 years of age in 2019-20, compared to NFHS-4. West Bengal saw a jump of 28.1 per cent in this area as 83 per cent of the women surveyed in the said age group were using hygienic methods of menstrual management as compared to 54.9 per cent in NFHS-4. 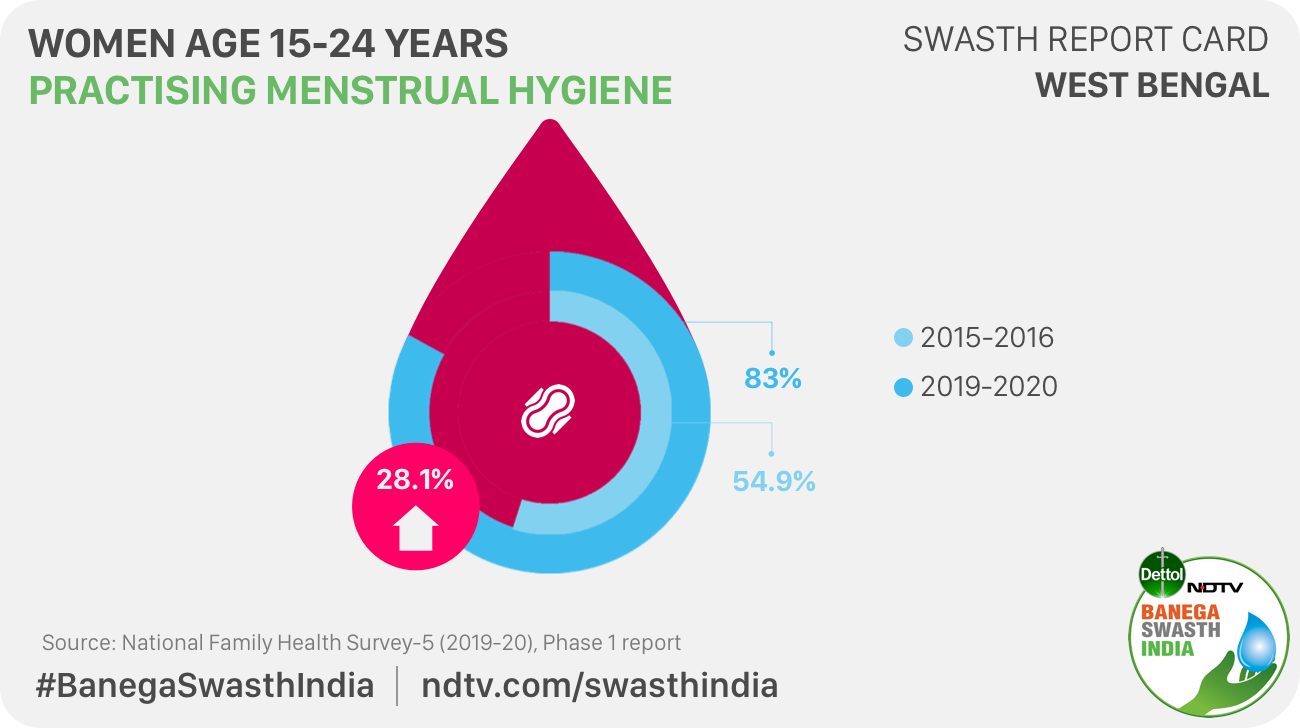 According to the Ministry of Health and Family Welfare, locally prepared napkins, sanitary napkins, tampons, and menstrual cups are considered to be hygienic methods of managing menstruation.

According to NFHS-5, about 97.5 per cent of the sample population has access to improved drinking water sources in West Bengal which is almost same as in NFHS-4 (97.2 per cent). According to the Union Health Ministry, the sources of drinking water include piped water in the residence or piped to neighbour, public taps, tube-wells, dug-wells, rainwater tanks, community RO plants among others. 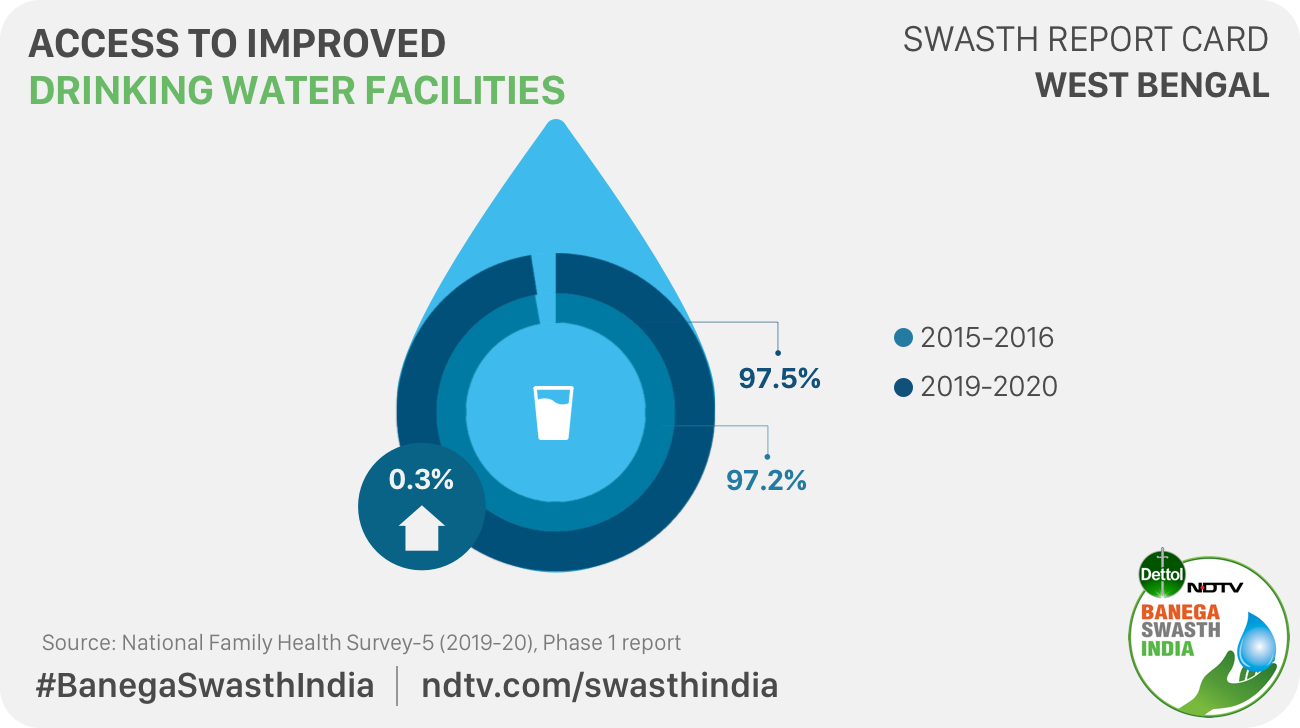 Only 68 per cent of the population surveyed has access to an improved sanitation facility, reveals NFHS-5. This is an increase of almost 15 per cent when compared to the population having access to toilets in NFHS-4 which was 52.8 per cent. 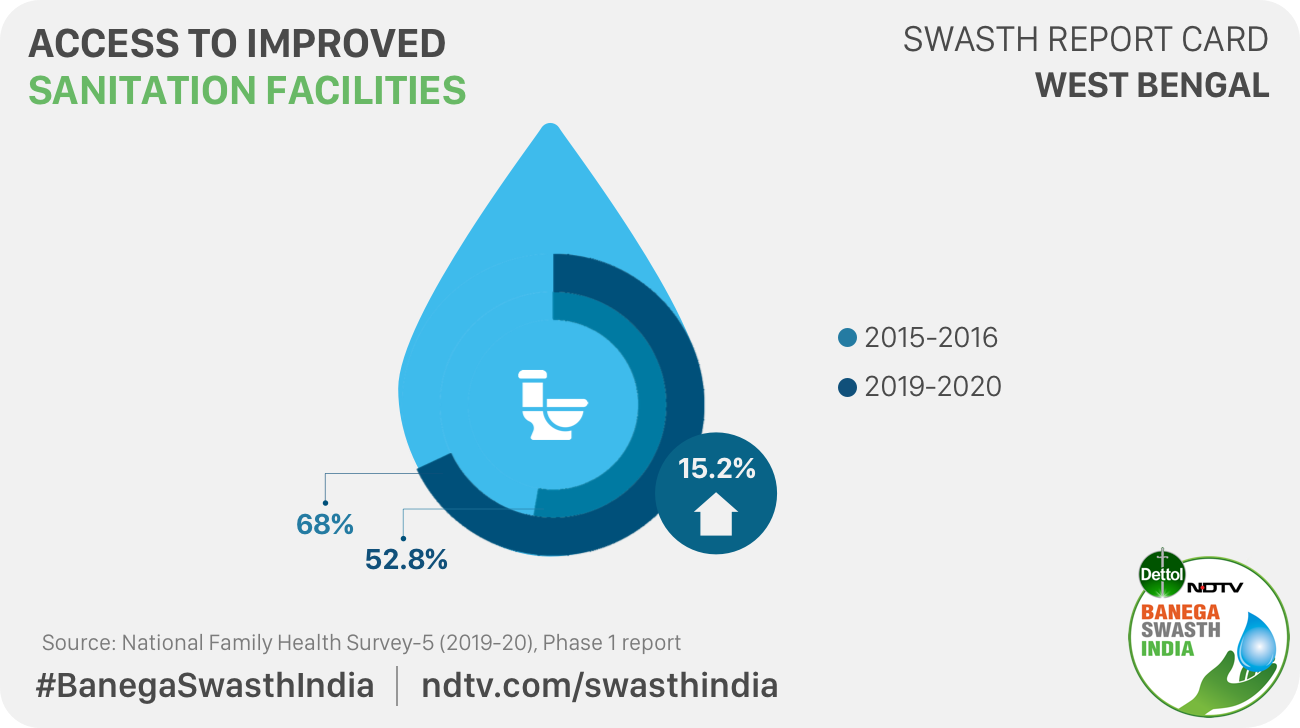 It is to be noted that the NFHS factsheet does not talk about the prevalence of open defecation in the state. However, the data on access to improved sanitation facilities challenges the state government’s claim of rural Bengal becoming open defecation free in August 2019. According to an official from Department Of Panchayats and Rural Development, over 135 crore rural households were covered under the state’s sanitation mission called ‘Mission Nirmal Bangla’. Some municipal bodies in the urban areas are yet to become ODF, said the official and as many as 52 municipal bodies were waiting to become ODF by November, 2019- when NFHS-5 data collection for West Bengal was concluded.