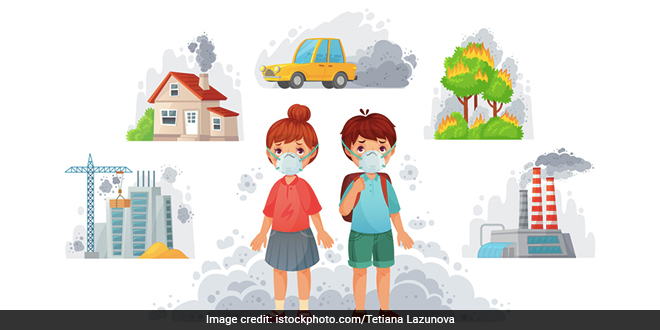 In children, air pollution is now causing neuro-inflammation which is making them hyper-excitable and decreasing their attention: Dr Arvind Kumar

New Delhi: India is the world’s second most polluted country in the world, states the Air Quality Life Index 2022, produced by the Energy Policy Institute at the University of Chicago (EPIC). Air pollution shortens the average Indian life expectancy by 5 years. And in some areas like Delhi, the most polluted city in the world, air pollution shortens lives by almost 10 years. Air pollution not only shortens lifespan but also adversely impacts all parts of the body during the course of life and kills an individual bit by bit. In an exclusive interview with NDTV-Dettol Banega Swasth India, Dr Arvind Kumar shared the health impacts of air pollution. Dr Arvind Kumar is the Chairman of the Institute of Chest Surgery, Chest Onco-Surgery and Lung Transplantation at the Medanta – The Medicity in Gurugram.

Also Read: From Pink To Black, A Chest Surgeon’s First Hand Account Of The Impact Of Air Pollution On Lungs

Immediate comes on the external surface. You have red watery eyes, itching and burning in the nose, sore throat, and cough. As soon as you inhale a huge amount of smoke, there is an instant cough and a little choking sensation. As far as short-term impacts are concerned, exposure to polluted air causes bronchial asthmatic tendencies. In children, it is known to cause pneumonia, in fact, in adults also. Especially in the elderly, those with pre-existing lung diseases, it can cause pneumonia and asthmatic tendency bronchitis.

When asked about long-term health issues, Dr Kumar said from head to toe, no organ or cell in the body is spared from the ill effects of air pollution. He explained,

Long term effects include various cancers in children, pre-mature hypertension in children, 10-20 times higher chance of brain attack and heart attack, lung cancer, Chronic Obstructive Pulmonary Disease (COPD), emphysema, various endocrine defects and now most frighteningly even obesity and diabetes are being linked to exposure to pollution. So, air pollution makes you diseased, it decreases your performance and kills you prematurely.

According to the Global Burden of Disease Study 2019, published in The Lancet, 1.67 million deaths were attributable to air pollution in India in 2019, accounting for 17.8% of the total deaths in the country. The death rate due to ambient particulate matter pollution increased by 115.3% from 1990 to 2019.

In children, air pollution is now causing neuro-inflammation which is making them hyper-excitable and decreasing their attention which is something schools are reporting and we are saying this present generation is very naughty. They are not naughty, they are actually suffering from ill effects of air pollution. It is a health-impacted community and not a naughty community.

The Impact Of Air Pollution On The Brain

One of the reasons behind hyperexcitability is the impact of air pollution on the brain. Explaining the same in detail, Dr Kumar said,

The portal of entry is the lungs and from there the polluted particles enter the bloodstream and get distributed to all the organs in the body. When they go to the brain, they cause inflammation, which in layman’s language is the swelling of the brain parenchyma as well as the layer meninges which are there. We call it neuro-inflammation. This causes hyperexcitability, and attention deficit disorders, among others. Reports from China suggest that prolonged exposure to air pollution causes impaired IQ development to the tune of 10-20 per cent. When these children become adults, they become susceptible to a 10-20 times higher chance of brain strokes.

How Pregnant Women And Fetuses Are Getting Affected By Air Pollution

Air pollution is now recognised as a threat to the lives of fetuses. Elaborating on this, Dr Kumar said,

When a pregnant mother breathes polluted air, pollutants get absorbed through her lungs and into the blood. It is that blood that is actually nourishing the baby growing in her uterus. The toxins impact the growth of the child, depending on what age of gestation they are in. In the first three months, the organs develop, so if these chemicals are what the fetus is exposed to, in the first three months, there could be congenital defects which is already a reported reality in the medical literature. Later on, it can cause intra-uterine growth retardation and premature delivery, it can even lead to the death of the child inside the uterus and a whole lot of problems after birth. There is a definite disease, disability and death which occurs in the baby inside a pregnant mother’s womb due to exposure to air pollution.