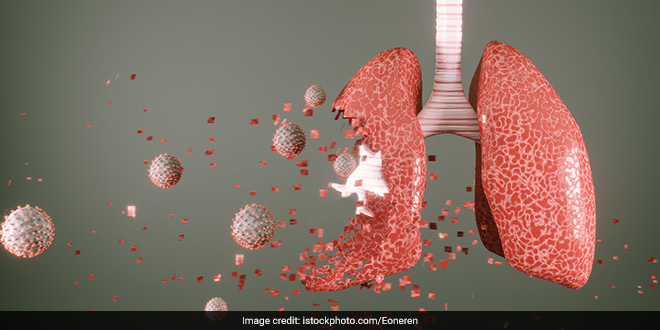 In nearly 30 per cent of cases, the patient's condition was initially misdiagnosed as Tuberculosis and treated for many months leading to a delay in definitive diagnosis and treatment

New Delhi: The study conducted by a team led by Dr Arvind Kumar from Medanta hospital observed that an increasing number of patients treated in the outpatient clinic were non-smokers of a relatively younger age group. Details of patients who underwent treatment between March 2012 and November 2022 were analyzed to assess the demographic details of these patients and chart a trend. A total of 304 patients were analyzed retrospectively. In the study, the age at presentation, gender, smoking status, stage of disease at the time of diagnosis and type of lung cancer were recorded and analyzed, besides other parameters.

Speaking about the study, the Chairman of the Institute of Chest surgery, Chest Onco-surgery and Lung Transplantation at Medanta hospital Gurugram, Dr Arvind Kumar said,

I am shocked at the alarming rise in Lung cancer cases and occurrences in younger individuals, non-smokers, and women. Lung cancer is a dreaded-disease, with one of the lowest 5-year survival rates.

While conventional wisdom says that smoking is the main cause, there is strong evidence now, that points to the increasing role of air pollution in the rising incidence of lung cancer.

Speaking about the initiative by the Medanta hospital with regards to Lung Cancer initiatives, Dr Kumar asserted,

#BeatLungCancer is a humble initiative by Medanta to increase disease awareness, promote screening for early detection, and provide inspiration and support through stories of strength of other patients.

Findings of this study which indicate a rising incidence in earlier unaffected population groups is a matter of concern.

In the study, it has been found that 50% of patients were non-smokers,

The incidence of Lung Cancer was rising in women, who accounted for 30 per cent of the overall patient load and all were non-smokers. In the past, this figure was much lower (as per Globocan 2012), revealed by the study.

The study further stated that 80 per cent of patients were diagnosed in the advanced stage of the disease when complete treatment is not possible, and the intent of treatment gets restricted to palliative.

In nearly 30 per cent of cases, the patient’s condition was initially misdiagnosed as Tuberculosis and treated for many months leading to a delay in definitive diagnosis and treatment, the study indicated.

The majority of patients were present with Adenocarcinoma against Squamous Carcinoma, which dominated earlier reports.

Notably, Adenocarcinoma forms when cells lining the outside of the lungs become cancerous, whereas Squamous Carcinoma impacts the cells that line the surface of airways. Former is known to have relatively poorer outcomes.

The study indicates that in the coming decade we are very likely to see an increase in the number of non-smoking Lung Cancer patients of the female gender in the younger age group.

This risk group is very different from the earlier dominant at-risk demographic of older men who smoke tobacco.

According to the study,

There is an urgent need to raise awareness about the risk of Lung Cancer across different sections of the society for appropriate actions. Effective measures to reduce tobacco consumption and control air pollution will help control the rising graph of Lung Cancer cases.