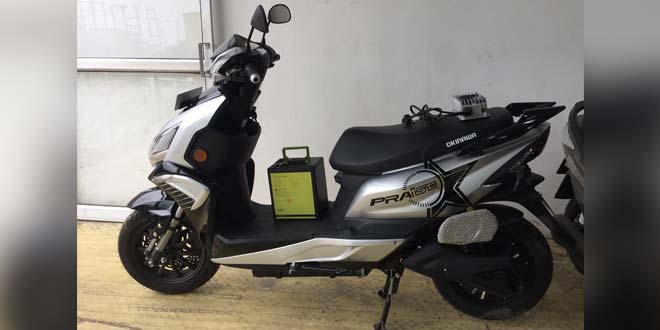 New Delhi: The holy town of Tirupati, in Andhra Pradesh, took a step in direction of e-mobility on March 4 as Okinawa Scooters, an electric two-wheeler manufacturing company, delivered 105 customised ‘i-Praise – The Intelligent Scooter’ to the Tirupati Municipal Corporation (TMC). The electric scooters are aimed at promoting electric mobility, zero emission travel, and curbing the problem of air pollution in the city and were handed over in the presence of Chief Minister of Andhra Pradesh, N. Chandrababu Naidu.

Okinawa Scooters is proud to provide 105 customised i-Praise to MCT in the presence of Hon. Chief Minister of Andhra Pradesh Sh. N. Chandrababu Naidu. Equipped with speakers and sirens for surveilling the Smart City, each scooter is designed with Lord Garuda as the concept. pic.twitter.com/gKdkJ5SaYC

Spread over an area of 27.44 square kms, with a population of over 3.7 lakh (374,260) according to the 2011 census, the Tirupati Municipal Corporation has 50 wards. The electric scooters (e-scooters) will be used by TMC staff within the city for city work, surveillance and to take care of the needs of the devotees.

The ‘i-Praise – The Intelligent Scooter’ by Okinawa scooters is equipped with the latest 2.9kwh detachable Lithium-ion battery technology which facilitates these to be charged anywhere, even at home via a 5A socket, resulting in uninterrupted e-mobility for the TMC staff, says Jeetender Sharma, MD, Okinawa Scooters.

The electric scooters provided by Okinawa to TMC are furnished with smart features like geo-fencing which means a scooter can be driven only in a dedicated location. As soon as it will move out of the geo marked location, it will stop and a siren will start blowing. Other features include trips, tracking, and monitoring, driver score, and find my scooter.

On special demand of TMC, e-scooters have been customised with speakers and sirens for making public announcements in the city by its staff members. Not only this, the city that is known for its Sri Venkateswara Temple dedicated to Vishnu, got e-scooters customised as per the concept of Lord Garuda, the vahana (vehicle) of Lord Vishnu, a dharma-protector and God of the vehicles, says Jeetender Sharma.