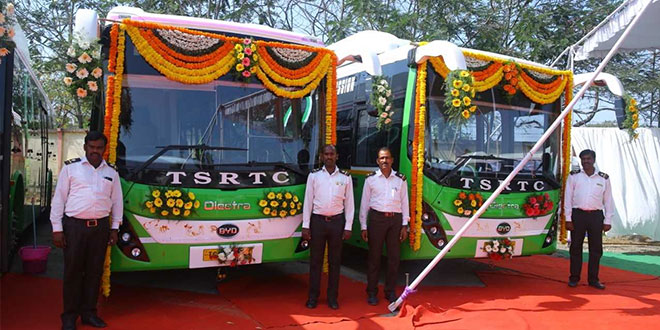 New Delhi: Giving a green and clean spin to the public transport in the city of Hyderabad, on Wednesday (March 6), Telangana State Road Transport Corporation (TSRTC) inaugurated its first fleet of 40 electric buses in the city. The electric buses will ply on six different routes, providing connectivity between the Rajiv Gandhi International Airport in Shamshabad and various localities of twin cities of Hyderabad and Secunderabad. The electric buses were flagged off from Miyapur depot two by Sunil Sharma, Principal Secretary Telangana, Roads and Building, Transport Commissioner of state and Managing Director TSRTC.

As part of the FAME India (Faster Adoption and Manufacture of Hybrid and Electric Vehicles) Scheme that focusses on encouraging the production and use of electric and hybrid vehicles by providing subsidies, Hyderabad was selected as one of the 11 Indian cities for the introduction of the electric vehicle based public transport. Today, Hyderabad has become the first city in the country to run electric buses sourced under the FAME India Scheme.

As part of the plan, a total of 100 low floor AC electric buses are to be introduced in the state. While 40 have got the green signal, the remaining 60 buses will be launched in the second phase.

For the deployment of electric buses in the city, TSRTC has collaborated with Olectra Greentech Ltd (formerly Goldstone Infratech Ltd), electric vehicles provider and BYD – automobile manufacturer. As per the deed, TSRTC has rented buses from Olectra for a period of 12 years at a cost of Rs. 35.54 per km (from 251km – 300km) and Rs. 33.12 per km thereafter.

Cost of one bus is Rs. 2.50 crore out of which Rs. 1 crore is being born by the central government under FAME scheme and the remaining amount is being taken care of by Olectra, said M Ravindar, Executive Director (Engineer), TSRTC, while speaking to NDTV.

Delighted with the launch of electric buses and deployment of 100th electric bus in India, Zhang Jie, executive director of BYD private Limited, said, “Another milestone for Olectra-BYD EV journey in India. We flagged off another 40 buses in Hyderabad; this is also the largest e-bus fleet in India. Thanks Telangana.”

another milestone for Olectra-BYD EV journey in India, we flagged off another 40 buses in Hyderabad, this is also the largest e-bus fleet in India. Thanks Tenlanga. pic.twitter.com/0kSD2GRDFD

Swachh Survekshan 2019: Here’s What Indore Did To Retain Its ‘Cleanest City Of India’ Title

In A Bid To Check Air Pollution, Punjab Brick Kilns Will Be Shifting To Cleaner Technology