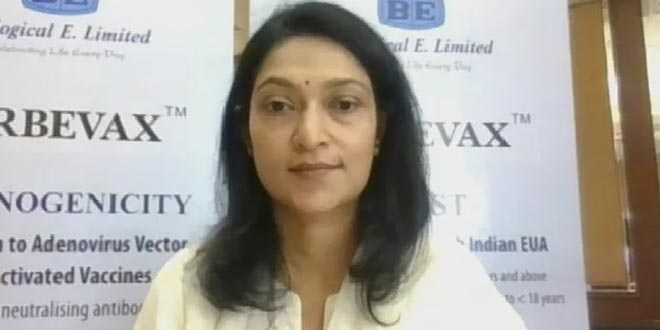 Talking of the sheer upscale needed to bring down the cost to this level, she said vaccines involve a huge amount of fixed cost

New Delhi: Corbevax has been made available to the government at a cost of Rs. 145 and Rs. 10 as taxes, the lowest price for a COVID-19 vaccine in the world. Corbevax is the only COVID-19 vaccine to be administered to those in the 12-14 age group. The firm manufacturing the vaccine is Biological E, headed by 44-year-old Mahima Datla, who is one of India’s remarkable business leaders. Under her leadership, Biological E is responsible for inoculating 1 in 2 babies in India with several other vaccinations. Calling Corbevax the “most affordable” vaccine, Ms Datla told NDTV that the affordability of her vaccine was one of the key goals they worked for.

Talking about the challenges the company faced when it came down to developing and scaling up their manufacturing, Ms Datla said that they had three considerations in mind.

First one was obviously to develop a vaccine that works, the second was safety. We wanted to try and test it properly to ensure the vaccine is safe and that we are not introducing more variables into a vaccine when the virus itself provides us with enough challenges. The third was affordability, and this point is directly connected with scale.

Also Read: India Widens The COVID Vaccine Drive, Inoculates Children Above 12 Years And Boosters For All Above 60

Talking of the sheer upscale needed to bring down the cost to this level, she said vaccines involve a huge amount of fixed cost.

The nature of the business is such that you have to invest in facility, trained manpower, power. The majority is fixed cost. So if you are allocating it all to a fewer number of doses, then the cost will obviously go up. We have to think upward of 100 million doses, she explained.

The government will purchase 80 crore doses from Biological E, Ms Datla tells NDTV. She also said that the factor of affordability was kept at the centre of the development of this vaccine.

The vaccine will cost Rs 990 in the market, inclusive of taxes. I have seen numerous occasions when the country’s, government’s or health budget is stressed, so it was our responsibility to make this affordable, she said.

That allowed us to lower the cost further making Corbevax the most affordable in the world.

When asked how effective the vaccine will be against Omicron, the latest strain to emerge across the globe, Ms Datla said it was a ‘difficult question to answer’. Ms Datla said that it was “hard to determine”, since there was no statistical model or “sufficient data”. She explained,

We did a head-to-head comparison with Covishield during the Delta wave. So the evaluation we conducted was against the ancestral strain as well as the Delta strain. Omicron became an issue after we completed the clinical trials. Our preliminary data suggests that our vaccine behaves in a fashion that confers some cross protection.

She also says all companies have been trying to test their vaccines to see how it performs against Omicron. Everybody expects a drop in efficacy, but if the protection levels still remain high, we will still have sufficient coverage, she said.

The scientific community agrees with the conclusion that the higher the antibody, the better chances of preventing severe disease and hospitalisation. So with vaccines we need to ask – are we conferring sufficient amount of antibodies to lower the incidences of severe diseases.

Lastly, Ms Datla says that the firm is aiming to manufacture one billion doses annually and has shared all the required documents with the World Health Organization (WHO) for review and clearance to be an official COVID-19 vaccine.

Related Topics:
COVID-19 Vaccine
Up Next

“Tip Of The Iceberg”: WHO On 11 Million New Global Covid Cases Last Week