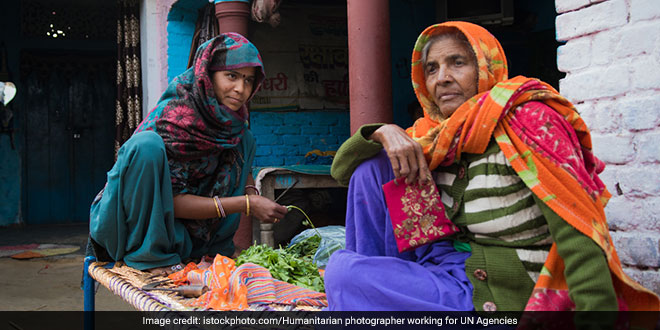 “Violence and abuse can destroy a woman’s life! She cannot get back easily as there is no support. Most have to live with it as they depend on others for sustenance”, these words from a young mother, we met recently in rural Uttar Pradesh continue to echo in our conversations as we observe the 16 Days of Activism Against Gender-Based Violence. The campaign that takes place every year from November 25 to December 10 is a reminder that gender-based violence is an everyday reality across the world. Girls and women continue to face violence at their homes, community, and workplaces as one in three women globally has experienced some form of gender-based violence.

Gender-based violence has serious consequences, including immediate injuries and long-term physical and psychosocial harm. Children who witness violence are more likely to have emotional and behavioural problems, perform poorly in school and be at risk of perpetrating or experiencing violence in the future.

Indirect impacts on individual and community productivity can lead to increased poverty and undermine potential economic and social development, creating a cycle of underdevelopment, poverty, and violence.

Women’s feelings of safety have been eroded leading to a devastating impact on their mental and emotional well-being, according to a new report released on the eve of the International Day for the Elimination of Violence against Women (November 25). Seven in ten women surveyed have said that violence has increased since the pandemic.

“Measuring the shadow pandemic: Violence against women during COVID-19”, based on survey data from 13 countries, shows that almost one in two women reported that they or a woman they know experienced a form of violence since the COVID-19 pandemic.

The report kicked off the 16 Days of Activism against Gender-Based Violence, from 25 November to 10 December, under the global theme set by the UN Secretary-General’s UNiTE campaign, “Orange the World: End Violence against Women Now!”

Gender-based violence can increase levels of hunger and malnutrition by affecting people’s degree of access to and control over food. For example, poor families may sacrifice girl child’s nutrition to meet the needs of male children. Additionally, people who have been exposed to Gender-Based Violence, owing to the trauma, stigma, and exclusion, may not be able to generate income and care for their dependents. In many contexts, women’s lack of access to and control of assets, services, and income increases their economic dependence as well as vulnerability to abusive and exploitative situations. These factors can lead to food insecurity.

Climate-induced extreme events are already increasing in numbers and intensity. Frequent hurricanes, droughts, and massive floods have resulted in several casualties, loss of land and livelihoods, displacement of vulnerable population which has long-lasting, devastating impacts. Such situations considerably increase women and children’s vulnerability to violence, including gender-based violence.

Climate change has also threatened women and men’s access to natural resources and stable livelihoods. All these factors ultimately impact the sustainable food security of communities, leading to impoverishment and hunger, spurring social ills like crime or alcoholism, and precipitating gender-based violence.

The growing scarcity of food and water, and fuel in climate-challenged areas make women particularly vulnerable to exploitation and abuse as they must intensify efforts to provide for their families. A vulnerability assessment of the tribal population in Rajasthan by WFP found that often women and girls had to walk long distances to fetch water for their families. Migration of men from the region was also high, leaving behind women and children, making them vulnerable to violence and sexual exploitation.

One of the key strategies adopted by WFP is to strengthen women’s livelihoods, enhance women’s access to resources and their economic empowerment. In Uttar Pradesh, WFP is supporting women-led micro-enterprises to establish units to produce fortified nutritious take-home rations for women and children under the Integrated Child Development Services scheme.

In Odisha, WFP is partnering with Mission Shakti, the department of women empowerment, to enhance the incomes of women’s self-help groups in the state. WFP is documenting some of the unique successes achieved by the Odisha Millet Mission, particularly in empowering tribal women through the cultivation and processing of millets- as a climate-responsive nutritious crop and supporting efforts towards the reduction of drudgery. WFP is also initiating work on anticipatory action for improved equitable access to Climate adaptation through alternate strategies for smallholder farmers in particular women farmers.

The vision of the world without hunger cannot be realized unless the efforts towards gender equality and prevention of gender-based violence and all factors that exacerbate it including climate change are addressed.