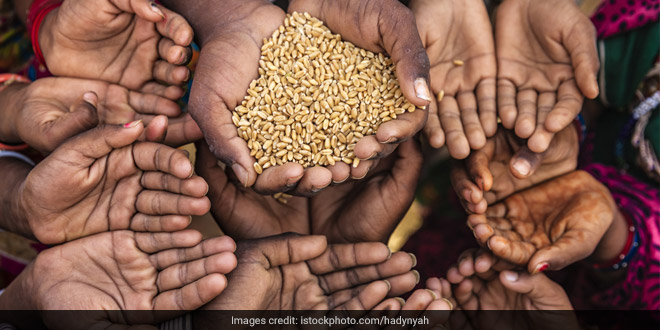 Climate change also has an observable impact not just on food systems but also on the food that we consume: Sunish Jauhari, President, Vitamin Angels India

As global leaders gathered for the 26th Conference of Parties or COP26 summit in Glasgow, issues associated with renewing national commitments for carbon footprint reduction and securing funds for climate change adaptation remained under the spotlight. However, an issue that continues to evade the attention of global leaders is the impact of climate change on food security of nations around the world.

Climate change and our existing food systems are intrinsically linked. According to a 2019 report by the Intergovernmental Panel on Climate Change (IPCC) 21-37 per cent of the total GHG emissions are caused by unsustainable farming practices. The Glasgow Climate Pact highlighted the need for all participating countries to revise existing national commitments to further cut down greenhouse gases (GHG) emissions by the end of 2022.

While the IPCC Report highlights the role of carbon dioxide emissions from deforestation and peatland degradation, caused by conversion of land for agriculture, a 2020 study published in Nature, talks of the use of fertilizers in farming increasing the concentration of nitrous oxide in the atmosphere by 1.4 per cent on an average every year since 1980. Furthermore, use of fossil fuels in farm machinery, food processing, packaging, transportation and retail are also major contributors to global warming.

At the same time, climate change also has an observable impact not just on food systems but also on the food that we consume. The IPCC report highlights that yields and nutrition quality of crops like maize and wheat in many lower altitude regions have already been affected due to the rise in mean global temperature. Fruits and vegetables that require a period of cold accumulation in winters face a threat. Furthermore, a 2020 report by the Food and Agricultural Organisation (FOA) shows that increasing frequency and intensity of extreme weather disasters such as floods, droughts and wildfires, and changes like altered precipitation patterns due to climate change are already having a devastating effect. The annual occurrences of such disasters is on a rise, making food production difficult. It is estimated that from 2008-2018, the impacts of natural disasters cost the agricultural sectors of developing countries over $108 billion dollars.

Available evidence suggests that India’s food security is also under threat from climate change. A 2020 report by the Ministry of Earth and Sciences (MoES) shows that there has been a decline in monsoon precipitation levels, increase in droughts and post-monsoon cyclonic storms. The combination of declining precipitation levels and increasing extreme weather events would have a severe impact on our food production capability. Furthermore, estimates by National Innovations on Climate Resilient Agriculture (NICRA) point out that yields of crops like rice and maize would decrease. It was thus encouraging to note that Prime Minister Narendra Modi in his COP26 speech laid emphasis on sustainable agriculture and lifestyle.

Addressing food security in a developing country like India will always be an issue fraught with added complexity. The country has about 195 million people that are undernourished . The recent Global Hunger Index (GHI) report and National Family Health Survey (NFHS-5) show an increase in the number of children suffering from wasting and stunting. Impacts like low yields and poor nutritional quality of food due to climate change would only worsen the situation for the most vulnerable sections of our society and reverse any progress made over the years.

Nutritional deficiencies would affect immunity and increase the burden of diseases. The fact that the Indian population is expected to grow from about 1.36 billion in 2019 to 1.64 billion in 2030 will put even higher demands on the existing systems.

Feeding a growing population while simultaneously ensuring that our systems become sustainable requires concentrated measures. There is a need to promote sustainable food production practices, utilising both cutting edge technology and existing indigenous practices. Traditional practices like sowing indigenous seeds that are less water intensive or using local organic material for compost are valuable assets. Investments will be necessary to make food storage and distribution both energy efficient and carbon neutral. Reducing carbon footprint would require more reliance on locally sourced produce instead of long global supply chains. Addressing nutritional deficiencies in both short and long term would require targeted food supplementation programs. Leveraging public private partnerships could assist in building such channels efficiently. Development of effective early warning systems to predict extreme weather events would not only protect valuable lives but also help in formulating localised policies that could reduce food insecurity. Measures like these are a need of the hour if we are to avert a disaster in time.

Multiple countries also signed two ‘Action Agendas’ at COP26 that call for changing agricultural policies to make them more sustainable and less polluting. However, these initiatives are short on enforcement mechanisms. Steadfast commitments that include a framework on accountability are necessary given that both global hunger and population are seeing a rise in numbers.

(Written by Sunish Jauhari, President of Vitamin Angels India, an international NGO that works on eradicating malnutrition and tackle deficiencies like Vitamin A and anaemia)