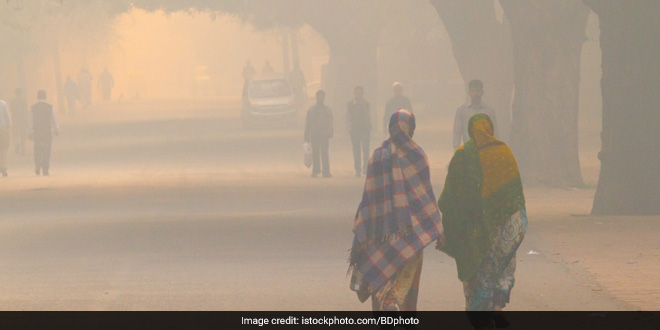 New Delhi: “It started as just a mild cough. After months of various kinds of treatment, visit to six doctors including five chest specialists, multiple x-rays and blood reports, I was diagnosed with stage II cancer in my lungs in April, 2017. It was very shocking for me and everybody who knew me, because we thought lung cancer happens to those who smoke and I never smoked. It was caused by air pollution as I lived and worked in Jhilmil, Delhi’s oldest industrial area. I survived cancer but my lungs will never be the same. My life will never be the same,” said Atul Kumar Jain, 40-year-old Delhi based businessman who beat lung cancer last year. NDTV spoke with Pulmonologists Dr. Praveen Pandey from Max Super Speciality Hospital, Patparganj and Dr. Suryakant, from King George’s Medical University, Lucknow, on the impact of air pollution on people who have healthy lungs and who have never smoked cigarettes. According to them, there is an increasing trend of people who do not smoke, or have no history of any respiratory illness seeing a decrease in the capacity of their lungs due to high exposure to air pollution.

Dr. Suryakant said that air pollution levels in cities like Delhi, Gurugram (Gurgaon), Lucknow, Varanasi among others, can put a healthy human being at a huge risk in terms of pulmonary health. He said,

Air pollution level in Delhi was so high in the past three months especially after Diwali that the Environmental Pollution (Prevention and Control) Authority (EPCA) and the Central Pollution Control Board (CPCB) had to declare a public health emergency. People, especially children and elderly were advised to limit their exposure to the outdoor air.

Are We Are All Smokers?

According to Dr. Pandey, even in the absence of the habit of smoking, present air quality is equivalent to inhaling the smoke of at least 30 cigarettes a day. He said,

Air pollution is impacting everyone, from the womb to the grave. There is a need for urgent and stringent anti-pollution actions instead of waiting for the wind to clear the air especially as winter sets in.

He further said that high levels of air pollution provide necessary triggers for the development of diseases like adult-onset asthma that happens to people who smoke or spend long hours in the ambience of toxic air. It makes the lungs more susceptible to viral and bacterial infections. He added that Chronic obstructive pulmonary disease (COPD ) is becoming extremely common due to high levels of air pollution with more than 10 million cases per year in India. COPD, which causes inflammation in the lungs, thus obstructing airflow from the lungs, can be controlled through treatment and not be cured. He asserted that cases of lung cancer among non-smokers are increasing too. He said,

The ratio of non-smokers among those suffering from lung disorders is growing year after year. Earlier (till the early 2000s) out of 10 patients I used to treat for respiratory illness, there would be only one non-smoker, with the rest being smokers. Now the ratio has increased to almost 50 per cent.

A study conducted by Sir Ganga Ram Hospital that analysed 150 cases of lung cancer between March 2012 and June 2018, also found that 50 per cent patients were non-smokers and over 21 per cent patients were below the age of 50 years. Experts from Sir Ganga Ram Hospital also estimated that intake of every 22 micrograms per cubic metre of polluted air is equivalent to smoking a cigarette. Similarly, a study conducted by the European Lung Foundation and published in the journal ‘Science Daily’ in July this year, also validated that the pollution produced by burning fossil fuels from vehicle exhausts, power plants and industrial emissions can cause early ageing of lungs and thus decreasing its capacity.

You Are What You Breathe, Say Experts

Jai Dhar, 47 years old athlete-turned-environmentalist who always had a very healthy lifestyle faced a sudden collapse of lungs while he was still on the track training for a marathon in 2015. He then found out that he has COPD and will never be able to run. He said,

A person intakes more than 100 times of air while running than a person in a sedentary state. I used to run every day in the stadium near my home in Gurugram. So I was more exposed to the toxic air of the city. On one fine morning, while I was training I fell on the ground and could not breathe. I felt like I was going to die. I was taken to the hospital where I found that I had COPD. My life has changed since then. I cannot run anymore but I am now on a mission to make people aware about the evil of air pollution. We are what we inhale.

Mr. Dhar who is now an air pollution expert and also a manufacturer of air pollution masks and air purifiers says that the kind of food, water and air people intake affects the composition of every cell in the body.

Highlighting the impact of air pollution on healthy lungs, Dr. Suryakant said that he along with other doctors and environmentalists conducted an experiment earlier this year in January in Lucknow, Uttar Pradesh. They installed artificial lungs in a busy street that were made from HEPA (High-Efficiency Particulate Absorber) filters and exhaust fans fitted in them which suck the air in and make the set-up function almost like real human lungs. According to Dr. Suryakant,

The installed lungs started getting black within 24 hours and turned completely black in five days’ time. Air pollution is no longer just a health risk. It has become a hazard. It doesn’t matter whether you are smoking or not, as everybody is equivalently inhaling the toxins.

The experts recommend seeking medical help and get necessary tests done, as per the symptoms, in case one experiences long stretches of wheezing along with trouble breathing. They say that high-risk population like pregnant women, children, elderly people and patients need to be extra careful and must avoid outdoor air pollution. This is because they have a weaker immune system, said experts. They recommend wearing an N95 grade mask while stepping outdoors, as it blocks at least 95 per cent of very small (0.3 micron) particles. Doctors insist that people, especially in the high-risk group must intake a healthy diet to strengthening the immune system and keep the nasal passage clean with steam.

How Effective Are Masks To Take On Air Pollution?

Five Easy Ways To Protect Yourself From Air Pollution