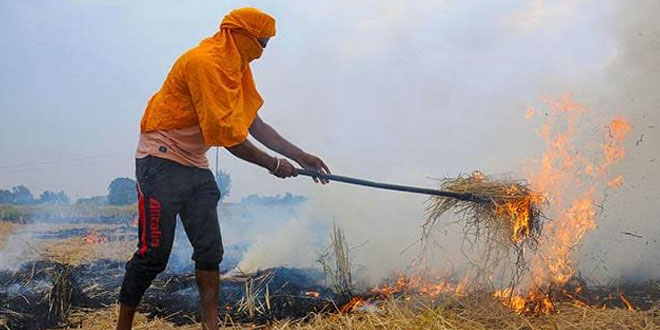 New Delhi: Air pollution levels in Northern India gets off the charts during the onset of winters every year. While pollution is a year-round problem in Northern states, experts say that winters are more problematic as the air becomes more condense which increases its capacity of holding the pollution particles suspended in the atmosphere. Along with vehicular exhaust, construction dust and industrial pollution, stubble burning in the states of Punjab, Haryana and parts of Uttar Pradesh also adds to the problem of air pollution especially in Delhi and the National Capital Region (NCR). System of Air Quality and Weather Forecasting and Research (SAFAR) reported that smoke from stubble burning in Punjab and Haryana accounted for 44 per cent of pollution in Delhi on November 1, the highest this year. While the state governments are grappling to find solutions to the problem of stubble burning, M S Swaminathan Research Foundation (MSSRF), a Chennai based non-governmental organisation founded by the father of green revolution M S Swaminathan, says that the solution lies in setting up Rice Bio Parks. In these parks, farmers can convert stubble into various products as paper, cardboard and animal feed and thus increase their income and not their carbon footprint.

Also Read: Air Pollution And Groundwater Depletion In Northwest India, Are The Two Problems Linked? A New Study Thinks So

Stubble or paddy straw is burnt in the period between mid-September to mid- November when kharif (or monsoon) crop is harvested. According to Polash Mukherjee, Air Pollution Expert in National Research Development Corporation (NRDC) who has worked extensively on issues related to stubble burning,

In order to plant the rabi (or winter) crop in October, farmers get a very small widow of time between clearing the rice crop and preparing the land for the next crop. Because of this lack of time, the farmers do not get the time to follow an adequate process to deal with the farm waste and are usually left with the option of burning it in the field itself. Along with lack of time, there is also a lack of adequate farm labour to deal with the high quantum of stubble.

Calling the governments in the states of Punjab and Haryana, to support farmers in utilizing the stubble for other purposes instead of blaming them for the smog and high levels of pollution in Delhi-NCR, Professor M S Swaminathan, in his tweet said,

I suggest that the Delhi, Haryana and UP governments put up Rice Bio Parks where farmers can convert stubble into income and employment. We should stop blaming farmers since it will take us nowhere. Instead, we should propose methods which are economically & ecologically desirable.

The air pollution in Delhi has become a matter of public health concern nationally and internationally. Farmers are being blamed by many including the Chief Minister of Delhi for burning stubble and thereby causing atmospheric pollution. 1/4

He also said that the Northern States of India must take a cue from the farmers in the South where farmers don’t resort to burning their stubble but in turn, convert it to use as animal feed.

In South India stubble is not burnt as there's economic value as animal feed. For years I pointed out many economic uses of rice straw. We should adopt a do-ecology approach with farmers to convert rice stubble into income rather than making them agents of eco-disaster. 2/4

According to Dr. Rangalakshmi, Project Director at MSSRF, the institute had set up a Rice Bio Park at Nay Pyi Taw, Myanmar in December last year. She suggests that the same model of tackling farm waste should be implemented in India, especially in the northern states, to tackle stubble burning and improve the rural economy and the lives and livelihoods of farmers.

#PresidentKovind dedicated Rice Bio Park in Yezin Agricultural University to people of #Myanmar which was set up under the mentorship of MS Swaminathan Research Foundation. @msswaminathan pic.twitter.com/DIKy1h5IJS

Dr. Rangalakshmi asserts that the income of rice farmers is less in comparison to those engaged in horticulture and cash crop farming. She said,

It is usually said for rice farmers that they are born in debt, live in debt and die in debt but this situation can be changed by judicious use of every part of the rice biomass. For this, technological intervention is required which can be done with the help of the Rice Bio Park.

Mr. Mukherjee highlighted that the state governments of Punjab and Haryana are trying to reduce farm fires by providing subsidies to farmers to buy machines to tackle paddy. However, he added that the scale of stubble production is very high and a large number of farmers are still far from getting government support. He also asserted a need for tackling stubble burning with a multi-faceted approach by addressing the shortage of farm labour, less time for clearing and preparing the field for next crop and lack of collection and transportation of stubble from the field to a processing facility like a biofuel plant.

According to Dr. Rangalakshmi, Rice Bio Park is a facility where by-products of rice, including husk, straw and bran, are converted into biomass value-added products like cattle feed, paper and compost. She said that in order to help farmers move away from the practice of stubble (or paddy straw) burning, it is necessary to create an economic value of the straw. She further said that money spent in preventing farmers from burning straw can be utilized better to demonstrate the value of community-owned and managed Rice Bio Parks.

Talking about the Rice Bio Park set up by MSSRF in Myanmar, she said that it has helped the local farmers there to more than double their previous income and has even helped some of them become small scale entrepreneurs. The Rice Bio Park in Nay Pyi Taw is spread in 2.05 acre area and has various buildings constructed to accommodate several milling and manufacturing units. Along with rice milling to procure the grains for selling in raw, puffed, popped and flaked forms, the rice biomass is also utilized in the following way: 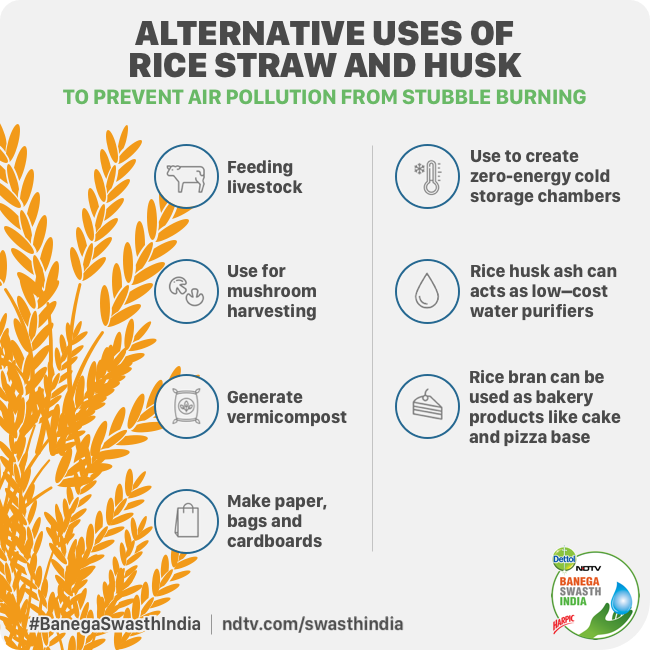 The farmers are encouraged to engage in the bio parks and fully utilise the rice and the rice biomass to increase their income and reduce waste and pollution.

While Professor MS Swaminathan has recommended setting up bio parks for rice and even pulses and wheat, only state governments of Kerala and Karnataka have expressed interest in installing the bio parks.

A Mix Of On-Site And Off-Site Solutions Can Tackle Farms Fires In A Much Better Way: Air Pollution Expert

The solution suggested by Professor Swaminathan has a lot of value and the state of Punjab that has the highest burning of stubble must consider setting up of bio parks.

He further said that Punjab and Haryana produce about 20 million tonnes of rice biomass every year. This forms a substantial portion of the 100 million biomass produced in the whole country from all kinds of farming in a year. He asserted that in order to address the issue of utilising the high scale of rice biomass, there is a need for multiple solutions. He calls for mixing in-situ (on-site) solutions and ex-situ (off-site) solution. According to him, the in-situ solution includes using of agro machines like Happy Seeders which allow sowing of the next crop without disturbing the stubble and waiting for the stubble to become manure. The ex-situ solutions, on the other hand, include setting up of a facility like a biofuel plant or a rice bio park. He said,

Currently, the governments of Punjab and Haryana are focusing only on in-situ solutions but the scale of the biomass produced is so large that this approach alone is not able to work at all. It is imperative that the stubble is utilised for other purposes as well.

However, he pointed out that due to lack of farm labourers and lack of time before sowing the next crop, collection of paddy straw becomes a problem for implementing ex-situ measures. He said,

The paddy straw need to be carried to the plants which may not be near the field or even the village or district. Recently a huge plant has been set up in Mohali to convert paddy straw into the energy pellets. It will be very difficult to take tonnes of paddy straw to Mohali for small farmers. Therefore, the way out is to set up decentralised collection centres at village and district levels to make it easier for the farmers to get rid of the stubble in less time and continue providing mechanical help on subsidised rates to deal with some amount of paddy in the field itself.

As The New Decade Begins, World’s Busiest International Airport In Dubai Is All Set To Eliminate Single-Use Plastics