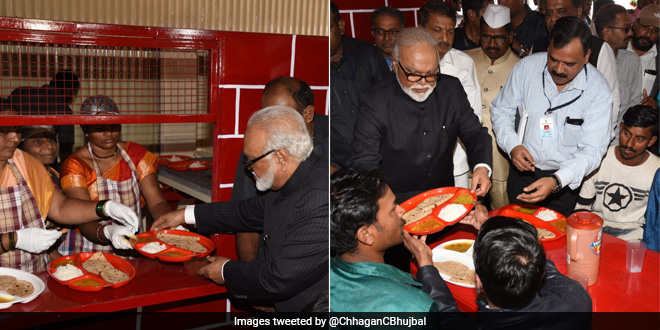 New Delhi: The state government of Maharashtra has launched ‘Shivbhojan’ initiative on Sunday across the state with an aim to combat hunger and malnutrition in the state. The scheme, popularly known as the Rs. 10-thali scheme is feeding more than 11,000 people every day in exchange of Rs. 10 per meal. Meant for people from economically poor sections and homeless, ‘Shivbhojan’ meal comprises two chapattis, a 100 gram (gm) bowl of vegetables, a bowl of 150 gm rice and a bowl of 100 gm of lentils. While talking to NDTV about the newly launched scheme, a senior officer from the Department of Food, Civil Supplies and Consumer Protection, Government of Maharashtra said,

The scheme was launched on January 26 to mark the 71st anniversary of India’s republic day. To implement the scheme, 122 centres were opened. On the first day, more than 11,400 people were benefited under the scheme. The number of beneficiaries rose to 13,600 on the second day and on the third day more than 14,000 people took meals at a subsidised rate.

According to the official, the scheme is being implemented through multiple contractors who are providing subsidised meals at 122 special centres across the state called ‘Shiv Bhojanalayas’. The cost of preparing each meal is Rs 50, of which the state government will pay to the contractor Rs. 40 as subsidy and Rs. 10 will be paid by the beneficiaries.

Talking about the scheme further, the officer said that in order to monitor the scheme, the state government has also developed a mobile App on which the meals distributed per day will be recorded at each centre. He said,

When a person reaches the centre to buy the meal, the operator is required to enter the name and a picture of the beneficiary in the mobile app along with the food received by him/her.

The beneficiaries will not be asked to show an identification card or proof of their economic status for taking food from a ‘Shivbhojan’ Centre. While the scheme encourages the economically underprivileged people, to eat and improve their intake of food, the officer said that even the well-to-do section can take food from ‘Shivbhojan’ centres. He said,

We have left it entirely on the conscience of the people. We cannot refuse food to anyone who comes to any of the ‘Shivbhojanalaya’. If a person from the privileged section wants to eat a meal at Rs. 10, we have to serve him.

However, the official clarified that the ‘Shivbhojan’ scheme will be off-limits for the government employees.

Commenting on the ‘Shiv Bhojan Scheme’, Seema Kulkarni, an activist in Mumbai said,

Food is critical to the survival of human beings and for food security depends on three parameters – availability, accessibility and affordability. I am glad that the state government has taken a step towards making food available, accessible and affordable to the poor and homeless people in the state. It is Maharashtra’s own version of Tamil Nadu’s Amma canteens that provide food to the poor and the needy at heavily subsidised rates. It was one of the promises they made in their manifesto and it is encouraging to see the current government working towards delivering on their promises.

After receiving a positive response from the people of Maharashtra, the state government is planning to increase the number of centres in the coming days.

Hunger And Malnutrition In Maharashtra

While responding to a plea in 2016, the Mumbai High Court acknowledged that 17,000 people died in tribal areas of Maharashtra due to undernutrition or poor intake of food, in the previous year. The fourth National Family and Health Survey (conducted in 2015) shows that there is a high prevalence of malnutrition among the children in the state. Wasting or low weight for height among children in the state is 25.6 per cent and the problem of underweight is 36 per cent. On both parameters, the state is performing worse than the national average of 21 per cent and 35.8 per cent respectively.