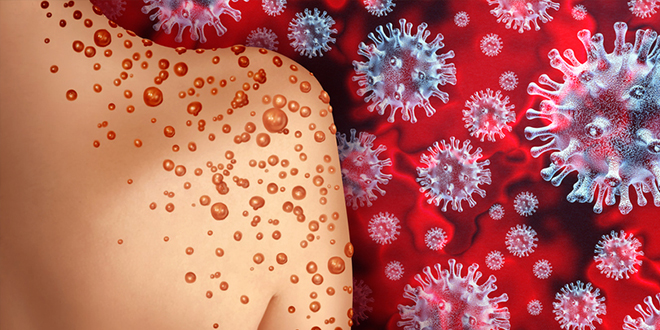 New Delhi: The World Health Organisation (WHO) has sounded its highest level of alert for Monkeypox and declared the virus as a public health emergency of international concern (PHEIC). Monkeypox is a zoonotic disease caused by the Monkeypox virus, which belongs to the same family of viruses that causes smallpox. The disease is endemic in regions like West and Central Africa but lately, cases have been reported from non-endemic countries too, according to the WHO. Since early May 2022, cases of Monkeypox have been reported from countries where there was no history of Monkeypox. Risk of Monkeypox infection is high through close physical or direct skin-to-skin contact or sexual intercourse with an infected person or by touching their bedding or clothing, as per WHO.

In India, a 34-year-old man from Delhi with no history of foreign travel tested positive for Monkeypox on Sunday, taking the country’s tally of cases to four. Three cases of Monkeypox were earlier reported in Kerala.

Here are five things to know about the disease:

The symptoms of Monkeypox include fever, intense headache, muscle aches, back pain, low energy, swollen lymph nodes and a skin rash or lesions.

As per WHO, the rash usually begins within 1-3 days of the start of a fever. When it comes to lesions, the organisation explains, it can be flat or slightly raised, filled with clear or yellowish fluid, and can then crust, dry up and fall off. The number of lesions on one person can range from a few to several thousand. The rash tends to be concentrated on the face, palms of the hands and soles of the feet. They can also be found on the mouth, genitals and eyes. Symptoms typically last between 2 to 4 weeks and go away on their own without treatment, explains WHO. However, in some people, an infection can lead to medical complications and even death. Newborn babies, children and people with underlying immune deficiencies may be at risk of more serious symptoms and death from Monkeypox.

As per the government guidelines, a case is confirmed for Monkeypox virus by detection of unique sequences of viral DNA either by Polymerase Chain Reaction (PCR) and/or sequencing.
After the first confirmed case in India, the government deployed a multi-disciplinary team to Kerala to tackle the outbreak. The Indian Council of Medical Research (ICMR) trained 15 research and diagnostic laboratories across the country for early detection of the virus.

To help country's preparedness for Monkey Pox detection, 15 Virus Research & Diagnostic Laboratories across the country, which are geographically well distributed & strategically located, have already been trained in the diagnostic test by ICMR -NIV, Pune. @MoHFW_INDIA

To help country’s preparedness for Monkey Pox detection, 15 Virus Research & Diagnostic Laboratories across the country, which are geographically well distributed & strategically located, have already been trained in the diagnostic test by ICMR -NIV, Pune, the ICMR announced on Twitter.

The Health Ministry on July 15 issued guidelines for the management of the disease after the first Monkeypox case was detected.

As per the ministry’s guidelines, international passengers should avoid close contact with sick people, contact with dead or live wild animals and others.

Apart from this, International passengers should also avoid contact with contaminated materials used by sick people such as clothing, bedding or materials used in healthcare settings, or that came into contact with infected animals, said the ministry’s guidelines.

In addition, if people develop symptoms suggestive of Monkeypox like fever and skin rash and were in an area where Monkeypox has been reported or had come in contact with a person who might have Monkeypox are advised to immediately consult the nearest health facility.

As per the government guidelines, Monkeypox patients should be isolated in an isolation room of the hospital or at home in a separate room with separate ventilation. Patient are advised to wear a triple layer mask and their skin lesions should be covered to the best extent possible, using long sleeves or long pants, to minimise risk of contact with others. Lastly, the isolation is to be continued until all lesions have resolved and scabs have completely fallen off.

According to WHO, a vaccine was recently approved for preventing Monkeypox and some countries are recommending vaccination for persons at risk.

Many years of research have led to development of newer and safer vaccines for an eradicated disease called Smallpox, which may also be useful for Monkeypox. One of these has been approved for prevention of Monkeypox. Only people who are at risk, for example someone who has been a close contact of someone who has Monkeypox, should be considered for vaccination. Mass vaccination is not recommended at this time.

The organisation further explains that while the Smallpox vaccine was shown to be protective against Monkeypox in the past, current data on the effectiveness of newer Smallpox/Monkeypox vaccines in the prevention of Monkeypox in clinical practice and in field settings are limited.

Studying the use of vaccines for Monkeypox wherever they are used will allow for rapid generation of additional information on the effectiveness of these vaccines in different settings.

The first case of Monkeypox was reported from Kollam district of south Kerala on July 14 and the next two cases were also reported from the state. In the wake of these cases, Kerala government issued Standard Operating Procedures (SOP) for isolation, sample collection and treatment of those infected or showing symptoms of the disease.

Solid Waste Management In India: The Challenge Of Growing Mountains Of Garbage – Landfills