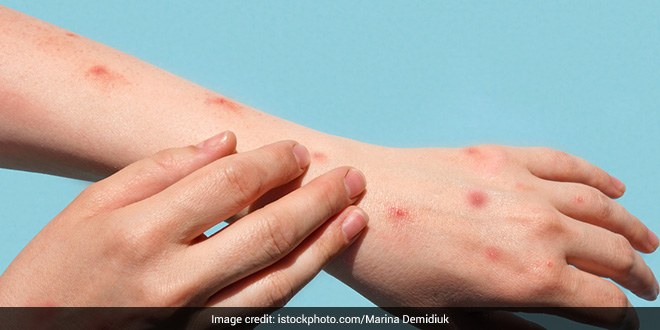 New Delhi: After India reported its first case of monkeypox, experts from the All India Institute of Medical Sciences (AIIMS) on Friday (July 15) said the infectivity of the viral disease is less but it can be fatal for children. Speaking to ANI, Dr Piyush Ranjan, Department of Medicine, AIIMS said, “The infectivity of monkeypox is less but it can be fatal in children. The COVID-19 infection has more transmissibility, but monkeypox infection occurs after prolonged exposure with an infected person. So the infection rate is very high in COVID and an infected person can infect many. But, monkeypox is less contagious.”

Monkeypox symptoms are like smallpox and chickenpox. At the onset, patients will have fever and enlargement of lymph nodes. After 1-5 days the patient may report rashes on the face, palms or soles. They may have rashes in the cornea leading to blindness.

The general public has also been advised to visit the nearest health facility if one comes in close contact with monkeypox-affected person or an area with the affected persons or animals.

The Indian Council of Medical Research (ICMR) informed that 15 Virus Research and Diagnostic Laboratories across the country, which are geographically well distributed and strategically located, have already been trained in the diagnostic test by ICMR -NIV, Pune to help country’s preparedness for monkeypox detection.

India reported its first monkeypox case with a traveller from the United Arab Emirates (UAE) who arrived in Kerala three days ago testing positive for the viral disease, on Thursday.

Union Health Ministry rushed a high-level multi-disciplinary team to Kerala to collaborate with the state health authorities in instituting public health measures in view of the confirmed case of monkeypox in Kollam district of Kerala.

The team shall work closely with the State Health Departments and take stock of the on-ground situation and recommend necessary public health interventions. The Centre is taking proactive steps by monitoring the situation carefully and coordinating with states in case of any such possibility of an outbreak occurs, said the Ministry of Health.

No need to panic as the centre has given fresh directions to all the states and Union Territories regarding monkeypox. It spreads through close contact with lesions, body fluids, prolonged contact with Respiratory Droplets and contaminated materials such as bedding, official sources told ANI.

Meanwhile, the World Health Organization (WHO) said it has put the South East Asia region on alert and advised appropriate steps to contain the spread of monkeypox.

The Region has been on alert for monkeypox, countries have been taking measures to rapidly detect and take appropriate measures to prevent the spread of monkeypox, said Dr Poonam Khetrapal Singh, Regional Director, WHO South-East Asia

“WHO has been supporting Member countries in the Region assess the risk for monkeypox and strengthen their capacities to prepare and respond to the evolving multi-country outbreak,” she further said.

According to World Health Organization (WHO), monkeypox is a viral zoonosis (a virus transmitted to humans from animals) with symptoms similar to those seen in the past in smallpox patients, although it is clinically less severe.

Monkeypox is transmitted to humans through close contact with an infected person or animal, or with material contaminated with the virus. It is usually a self-limited disease with symptoms lasting from two to four weeks, WHO said.

Monkeypox virus is transmitted from one person to another by close contact with lesions, body fluids, respiratory droplets and contaminated materials such as bedding.

As reported by WHO, since January 1, 2022 and as of June 22, 2022, a total of 3,413 laboratory-confirmed cases of Monkeypox and one death have been reported to WHO from 50 countries/territories.

The majority of these cases have been reported from the European Region (86 per cent) and the Americas (11 per cent). This points to a slow but sustained increase in the spread of cases globally. Considering this is the first time that cases and clusters are being reported concurrently in five WHO Regions, WHO has assessed the overall risk of spread of cases as “Moderate” at the global level.

South-East Asia On ‘Alert’ For Monkeypox: WHO Regional Director