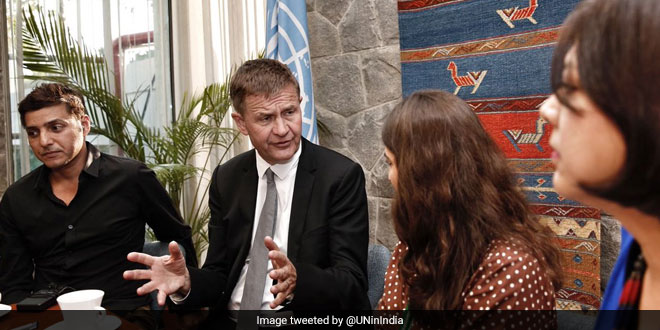 New Delhi: “So moving to be with Afroz Shah and hundreds of volunteers cleaning the Tapi River in Surat,” tweeted the former United Nations Environment Chief, Erik Solheim who is visiting the city to deliver a talk at Aljamea University. Mr. Solheim was joined by the UN Champion of Earth awardee, Afroz Shah, who was also a speaker at the same seminar. Mr Solheim further praised Afroz Shah by saying that “the world needs more leaders like Afroz”.

So moving to be with Afroz Shah and hundreds of volunteers cleaning the Tapi River in Surat ????????. Huge amounts of plastic waste at the banks of this great river.
The world need more leaders like Afroz. ????
Let’s talk less, roll up our sleeves more often. ???? pic.twitter.com/2GPKqKqrDw

The duo conducted the river clean-up with the help of some volunteers from Mumbai and students from Aljamea University.

This wasn’t the first time Mr. Solheim had appreciated Afroz; he also sat down for a discussion about Mithi River rejuvenation with the Maharashtra Chief Minister Devendra Fadnavis.

Mithi River must be brought back to life,” he tweeted. Before adding “Afroz Shah and his team will help!

River Mithi must be brought back to life!
Great discussion with chief minister Fadnavis of Maharashtra ????????.
So glad to see how dedicated he is to the recovery of the polluted river! Sewage will be cleaned and plastic pollution will be beaten.
Afroz Shah and his team will help! pic.twitter.com/p67zX95B1Z

Afroz Shah has been actively invested in the efforts to rejuvenate Mithi river since late 2018, with the addition motive of promoting citizen driven movements.

1. Helps marine species – Less plastic in their food and habitat.

2. Helps change mindset of people to evolve from #BeatPlasticPollution to #Circulareconomy

Talking about the need for Mithi river clean up, he had told NDTV back in November,

The idea behind Mithi river cleanup is to create an army of people who love and value natural water bodies. I realised how bad the condition of Mithi river is when an Imam of a nearby mosque told me that 30 years ago, he used to use the water from the river as drinking water and now it has turned into a sewage. The river is 18 kilometres long starting at Vihar lake in Powai and ending near the Bandra Kurla Complex. Looking at the condition of the river I can say that it is going to take at least five years to clean the river.

Related Topics:
River Clean Up river pollution
Up Next

Number Of Days With Good Air Quality Is On The Rise In Delhi, Says Union Minister Prakash Javadekar