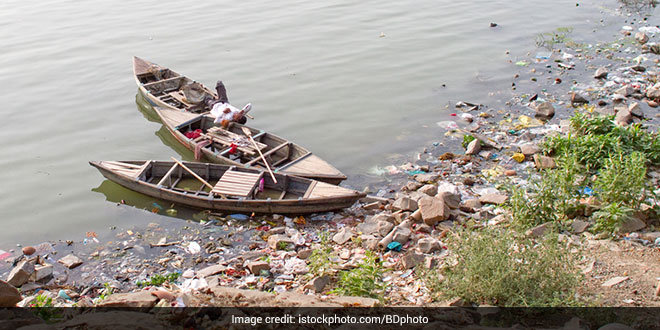 New Delhi: Taking cognisance of contamination of rivers by effluent, the Supreme Court Wednesday (January 13) said pollution-free water is a fundamental right which a welfare state is bound to ensure, and issued notices to the Centre, CPCB and five states including Delhi and Haryana on the issue. The top court, which directed its Registry to register the suo motu case as ‘Remediation of polluted rivers’, said it would first take up the contamination of the Yamuna river and asked Central Pollution Control Board (CPCB) to submit a report identifying municipalities along it which have not installed total treatment plants for sewage.

The order, widening the scope of judicial scrutiny of contamination of water to rivers across the country, was passed by a bench headed by Chief Justice S A Bobde which was hearing a plea of Delhi Jal Board (DJB) alleging that water containing high pollutants is being released into the Yamuna river from Haryana.

DJB alleged that the water released by neighbouring Haryana into the Yamuna has pollutants including high ammonia content which become carcinogenic after mixing with Chlorine. We find that in addition to the issue raised by present petition, it will be appropriate to take suo motu cognizance with regard to the issue of contamination of rivers by sewage effluents and ensure that the mandate is implemented by municipalities as far as discharge of sewage into rivers is concerned, said the bench which also comprised justices A S Bopanna and V Ramasubramanian. It said the DJB’s petition related to increased ammonia levels in Yamuna due to discharge of pollutants, but it highlighted an issue of great significance and consequence not only for general public but all living beings dependent upon open surface water.

The top court directed the CPCB to submit a report identifying municipalities along the river Yamuna, which have not installed total treatment plants for sewage as per the requirement or have gaps in ensuring that the sewage is not discharged untreated into the river. CPCB may also highlight any other source of prominent contamination within the limits of Municipalities. It shall also submit priority-wise list of Municipalities, river stretches adjacent to which have been found to be most polluted, it said.

Article 21 of the Constitution of India, provides for right to life and also right to live with human dignity. The right to clean environment and further, pollution free water has been protected under the broad rubric of the right to life guaranteed under Article 21, it said. The bench referred to constitutional schemes and said a duty is also cast on every citizen to protect and improve the natural environment including forests, lakes, rivers and wildlife. It is manifestly clear that pollution free water forms the basic right under the Constitutional framework and a welfare state is bound to ensure the same, it said.

In the proceedings conducted through video conferencing, the top court also appointed senior advocate Meenakshi Arora as amicus curiae to assist it in hearing the suo motu case. The bench has now posted the case and DJB’s plea for hearing on January 19. The 7-page order said rapid population growth, modern living patterns, wide spheres of human activities and industrialization have resulted in greater demand for fresh water and at the same time, pollution of water resources is increasing steadily.

One of the major causes of water pollution is discharge of non-treated/partially treated municipal waste including sewage effluent of cities into rivers. In and around cities, surface water resources such as rivers, ponds and lakes where effluents are discharged from local bodies are highly polluted. Such discharge of human sewage and other pollutants results into deterioration in chemical, physical and biological properties of water. All these processes lead to degradation of natural environment, it noted.

The effect of water pollution on human health is not the only adverse factor and this pollution can seriously harm the aquatic life in water bodies, it said. The order referred to a 2017 judgement and said it was directed that the norms for generating funds, for setting up and operating the ‘Common Effluent Treatment Plant’ as well as ‘Sewage Treatment Plants’ shall be finalised on or before January 31, 2017, so as to be implemented from the next financial year of that date.

It was directed that for the purpose of setting up these plants, the state government will prioritize such cities, towns and villages, which discharge industrial pollutants and sewer directly in rivers and water bodies, the order said.