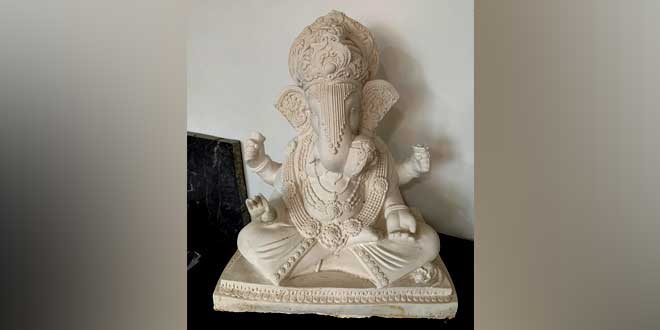 New Delhi: The countdown to Ganesh Chaturthi, a festival celebrating the birth of elephant-headed Lord Ganesha has begun. From preparing sweets, picking the Ganpati idol, sending invitations to family and friends, preparations for one of the grandest festivals of India is underway. Considering an irreversible damage caused to our water bodies – seas, lakes, oceans, ponds, post immersion of Ganesha idols as bulk of these are made of Plaster of Paris (POP), eco-friendly Ganesha is the new buzzword. From cow dung, clay to plantable, idol makers have a wide range of green Ganpati idols to offer. Among the idol makers, Dr Binish Desai, a social entrepreneur, waste warrior, and an innovator from Gujarat has come up with one of a kind Eco Ganesha made from jewellery waste.

During the making of artificial jewellery, glass beads are scuffed, leaving powdered waste which is non-recyclable in nature. Usually, jewellery manufacturers discard the jewellery waste which makes its way to the landfills. To stop this waste from reaching landfills and give it a new lease of life, we decided to use it in the making of eco Ganesha. We collect the jewellery waste and use a special binder to bind the waste and give it a shape of an idol. Later, the idol is painted using three colours – red, yellow and light purple or crystal. Since all three colours are derived from flowers, they are environment friendly. The entire idol is made out of waste. 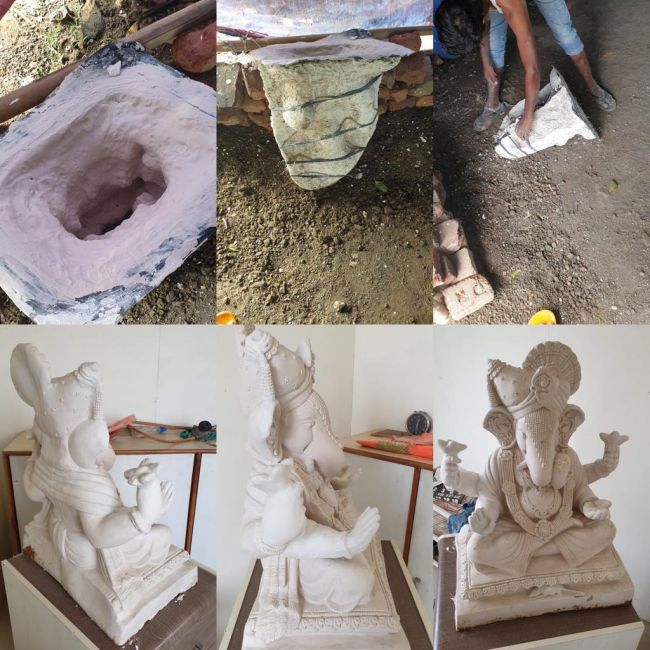 Eco Ganesha idol is completely made out of waste

On an average, 16 kg of waste is used in making of a regular size Ganesha idol. It is not just the idol that is eco-friendly, but the process of visarjan (immersion) has also been given a green spin. From conception to immersion, the celebration of Ganesh Chaturthi has been divided into four steps – homecoming, visarjan, repacking and repurposing. Shedding light on the same, Dr Desai says,

The first step of homecoming involves bringing eco-bappa home and celebrating with great gaiety and fervor. Eco Ganesha comes with a visarjan bag that will come handy during visarjan. To not pollute water bodies, we suggest immersing the idol in a tub filled with water and then packaging it in a visarjan bag. One can either send us the immersed idol or we can arrange pickup. Since the idol is not made of soluble material, it is easy to repack and send it to us.

Once the team receives the idol, they start the process of repurposing under which an idol is upcycled into memorabilia and returned to the user. Eco Ganesha will be made available for the public from next year. For the upcoming Ganesh Chaturthi, the waste warrior is gifting eco-friendly idols to his family and friends. Giving out price details, Dr Desai says,

The waste warrior also plans to add a noble cause to the festival. From next year, the immersed idol will be converted into bricks which will then be used in the making of varied structures – school, toilets, houses, among others. Two to three bricks can be created from an average size Ganesha, informs Dr Desai.

Recalling the Eureka moment that gave birth to the idea of Eco Ganesha, Dr Desai says,

The idea of creating an idol out of waste has been on my head for quite some time. It is only when I explored the jewellery waste in particular, I realised this would be an apt material for eco-friendly idols.

Also Read: Do It Yourself: How To Make Eco-Friendly Ganesh Idols At Home 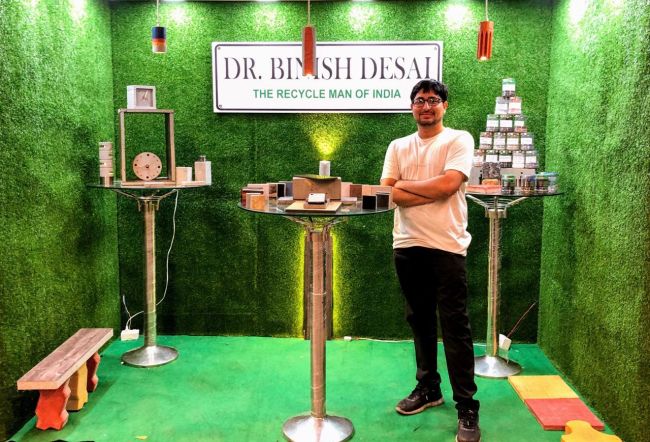 This is not the first time Dr Desai has innovated a way of waste management. The waste warrior kicked-off his swachh journey at the age of 11 by introducing the idea of making bricks using waste. At 23, he turned his idea and dream into a reality and developed P-block bricks made out of waste produced by paper mills. P block bricks have been used in constructing 3700 toilets across India. The waste warrior has also innovated lamps and chandeliers majorly made from secondary paper sludge waste. Till now, 1780 tonnes of waste has been recycled and 9000 households have been benefitted through various projects.

Urging everyone to celebrate the festival in a green way, Dr Desai signed off saying,

We all should work towards a sustainable responsibility where we celebrate the festivals in a most eco-friendly way as that is our biggest worship to nature and our mother Earth.