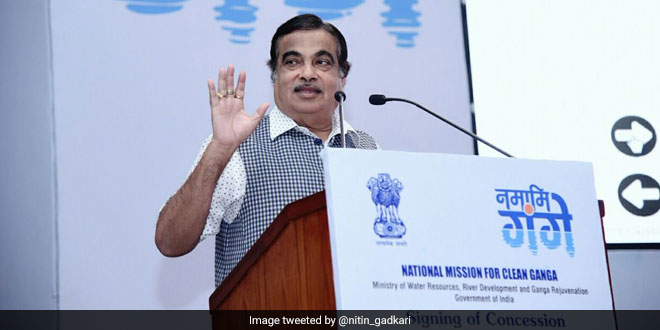 ‪New Delhi: heo ensure a cleaner Ganga by 2019, the government is now focusing on cleaning its tributaries and sub-tributaries, and on effective management of sewage treatment plants. The Union Minister for Water Resources and Ganga Rejuvenation Nitin Gadkari stressed that Ganga, India’s longest river which is 2,500km long, cannot be cleaned unless its tributaries are cleaned. The minister also informed that 47 of the 225 projects for cleaning the Ganga and its tributaries have been completed, while 14 projects are under construction on the river Yamuna, a major tributary of Ganga, which has been struggling with pollution for a long time.

‪Mr Gadkari was speaking on the occasion of signing of agreement for development of sewage treatment plant with an integrated sewage infrastructure for Yamuna in Mathura. He reiterated government’s commitment that 80% of Ganga will be cleaned by March 2019. “The Ministry of Water Resources and Ganga Rejuvenation is working with great responsibility to clean Ganga. We have sanctioned projects worth Rs 205.14 crore from Clean Ganga Fund, and also cleared Rs. 37 crore-proposal for a sewage treatment plant for the Sarayu river in Ayodhya. While the sewage treatment projects on the Hindon and the Kali, the two tributaries of the Yamuna, are also being taken up,” he added.

‪Asserting that several steps have been taken for cleaning the Ganga, Yamuna and its tributaries, the minister said that the government is working on the lines of waste to wealth approach for the Namami Gange programme.

‪Conversion of waste into wealth is our mission. The recycling of water will be done and used for industry… the tributaries of both Ganga and Yamuna rivers and all the filthy drains causing pollution will be cleaned via the sewage treatment plants, and the treated waste water will be then used for non-potable purposes, the minister said.

‪As part of this exercise to utilise the waste to wealth approach, the National Mission for Clean Ganga and Indian Oil Corporation Limited (IOCL) also signed an agreement on June 15 to reuse 2 crore litres of treated sewage water per day at IOCL’s refinery located in Mathura. As part of this agreement, a Tertiary Treatment Plant (a plant where final cleaning process to improve wastewater quality before it is reused, recycled or discharged to the environment is done) will be developed to supply treated sewage water from Yamuna and its tributaries to the Mathura refinery of the IOCL.

‪The total cost for the development and operation of the treatment plant for the next 15 years is Rs 162.38 crore. For the first 15 years, IOCL will bear the entire operations and maintenance cost of the plant amounting to Rs 82.38 crore for a period of 15 years. In addition to this, the IOCL will also pay an additional Rs 8.70 per kilo litre towards the partial capital cost for the development of the treatment plant.

‪Mr Gadkari also took to social media to announce this agreement to promote ‘waste to wealth’ approach among the industries to efficiently utilise the treated waste water.

‪In this regard, the Minister of Petroleum and Natural Gas Dharmendra Pradhan said:

Under Namami Gange programme, the sewage treatment plants have been set up in Mathura. This is the first project under the concept of #OneCity #OneOperator and promotes the re-use of treated water for effective abatement of pollution and conservation and rejuvenation of the Holy Ganga.

Under @cleanganganmcg project, Sewage Treatment Plants have been set up in Mathura. This is the first project under the concept of #OneCity #OneOperator & promotes the re-use of treated water for effective abatement of pollution and conservation & rejuvenation of the Holy Ganga. pic.twitter.com/adKRqsJhGY

.@PetroleumMin is leading from the front on Hon. PM @narendramodi ‘s visionary "waste to wealth" model.Along with use of treated water for manufacturing process,preliminary research is being carried out by @IndianOilcl to utilize Methane gas from STPs & other waste facilities.

Along with use of treated water for manufacturing process, preliminary research is being carried out by Indian Oil Corporation to utilise Methane gas from STPs and other waste facilities. The methane gas generated from the sewage treatment plant will be spread to several households in the form of cooking gas. This will be the first by-product formed by the STPs, Mr Pradhan added.

‪Under the Namami Gange scheme, tackling pollution in Ganga is going on in full swing, assured Mr Gadkari while speaking to NDTV on May 11 during the season 5 launch of Banega Swachh India campaign. Work is progressing to treat sewage from the top ten polluting cities of Kolkata, Kanpur, Patna, Varanasi, Allahabad, Howrah, Haridwar, Bhagalpur, Farrukhabad and Bally, which account for 70 per cent of the sewage that goes into the river Ganga. About 1,662 gram panchayats and 4,465 villages in five Ganga basin states of Uttarakhand, Uttar Pradesh, Bihar, Jharkhand and West Bengal have become open defecation free (ODF). Now, the government is making efforts to convert the Ganga villages into ODF Plus by managing solid and liquid waste there, by planting trees, which will ensure cleanliness and increase Ganga’s catchment area.

‪Till the end of the previous fiscal, the National Mission for Clean Ganga (NMCG), an authority implementing the ambitious programme, had spent Rs 4,254 crore (or 20 per cent) of the around Rs 20,000 crore sanctioned for the programme since 2015. However Mr Gadkari said that in 2018, there will be lot of expenditure “As per my assessment, we will be able to spend 60 percent to 70 percent of the (total) funds. So, from 20 per cent to 70 per cent means that expenditure going up by between Rs 8000 crore and Rs 10,000 crore, Mr Gadkari added.

‪With Mr Gadkari’s promise of a cleaner Ganga by 2019, it remains to be seen how well the next two years go in terms of implementation of Namami Gange’s primary objectives.