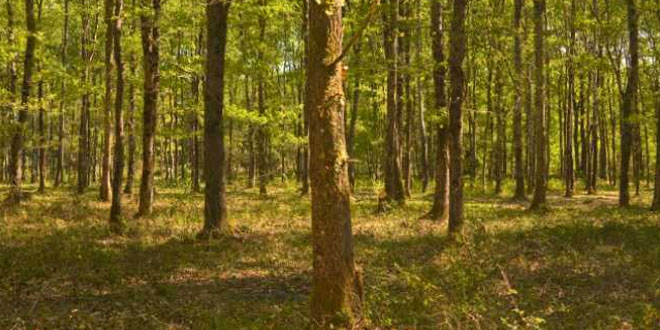 Dehradun: Forests are the lifeline of any river, which is why to conserve and rejuvenate one of the holiest rivers, Ganga, an afforestation drive is ongoing along the 2,525 km-long River and its catchment areas in five states – Uttarakhand, Uttar Pradesh, Bihar, Jharkhand, and West Bengal. The National Mission for Clean Ganga (NMCG), with the help of the Forest Research Institute, has identified an area of 134,000 hectares, in which plantation is to be done.

Rajiv Kishore, Executive Director, Administration, NMCG said, “It is not only an ordinary plantation; it is a very scientific plantation where they have specified the species to be planted as per the geographical condition of a particular state. You would agree that right from Gangotri to Gangasagar, it is not one uniform geographical and environmental condition. The ecosystems keep changing from one state to another. So, they have gone into detail and have looked at every particular area and then they have specified the species. This is the importance we have given to afforestation in the Namami Gange scheme.”

A Detailed Project Report (DPR) prepared by the Forest Research Institute, Dehradun, is helping the state forest departments implement the program to carry out afforestation activities. Dr. Savita, Director, Forest Research Institute, Dehradun said, “We would be planting more than 4 crore trees if the whole plan is implemented with lot of sincerity. The 4 crore plants would be planted on five kms of both sides of River Ganga and 2 kms of main tributaries. I am sure it will contribute to checking siltation and increasing the water flow. We have a target of creating carbon sink for mitigation of 2.5 million tons to 3 million tons of carbon by 2030, which is as per the Paris Agreement and I would say this will contribute towards that also”.

Tree plantation will help recharge the groundwater which ultimately recharges the river through small tributaries. Rajiv Ranjan Mishra, Director General of NMCG told ANI, “It’s become a model report because now Ministry of Environment and Forest is also looking at it very seriously to take it as a model and then help it from the CAMPA (Compensatory Afforestation Fund Management and Planning Authority) fund also. So, at present what we have done is as per the project report focusing on three types of plantation. One is the natural river escape – along the river. And then we are looking at the agricultural river escape and also urban river escape”.

The National Mission for Clean Ganga under its `Namami Gange’ Programme has provided funds to the state governments to establish nurseries and grow trees, plants, and shrubs as suited to climate and soil. At a nursery in Ranichori in Tehri district of Uttarakhand, various plants are being prepared to grow in the next season. “We have areas which are at an altitude of about 800 metres above sea level to as high as 6000 metres, the glacial areas. So, according to the terrain, the location has different species at different sites. As you have seen we are raising 40 per cent of tree species, 40 per cent of scrub species and 20 per cent of medicinal plants. In that ratio we do plantation in different areas,” said, Koko Rose, Divisional Forest Officer, Tehri, Uttarakhand.

As per the DPR guidelines for soil and moisture conservation in the forest areas, the state forest departments are also constructing control trenches, small check-dams, and side walls at specified sites. Santosh Vijay Sharma, Chief Conservator of Forests, Uttarakhand said, “We are taking the soil and moisture conservation work. In the areas selected as per this scheme, we are constructing control trenches, check dams, and side walls so that maximum of rainwater can be used before it flows down into the river. We will see its advantage after some time as it will help recharge the water sources which are now dry”.

Under the Namami Gange programme, the government also seeks the contribution of farmers, NGOs, and volunteers to help rejuvenate and conserve the holy river. Officials from the state forest departments are also interacting with farmers and villagers to motivate them to grow plants and trees. Free saplings are being distributed to those having private and agriculture land on the riverside. Ganga remains one of the most sacred rivers in the world with sacred pilgrimage sites and cities along its banks. Its depleting water flow has been a cause of concern for the citizens and the government alike. The revival of forests in the areas where the river flows will help in restoring it.

Over 60 Per Cent Delhiites Say No To Firecracker This Diwali: Survey