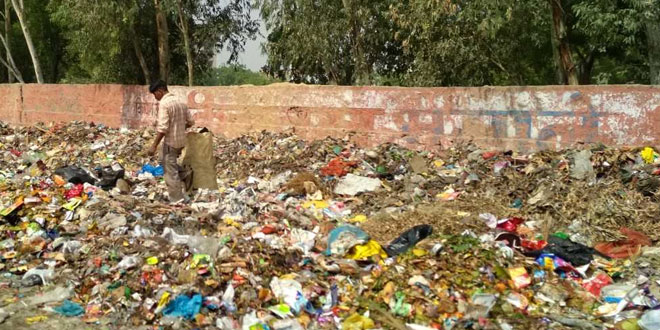 New Delhi: Rewind to 2016, when the first cleanliness survey, Swachh Survekshan was conducted and 73 cities of India assessed on how clean they were. Ghaziabad a satellite town of National Capital Delhi was found to be a slow mover and ranked at 67 on the swachh quotient. Forward to 2018, Ghaziabad is declared the fastest moving big city and secures 36th position in Swachh Survekshan that year. Considered the Gateway of Uttar Pradesh, Ghaziabad has definitely come a long way. Sustaining and adding to its swachh efforts, the city climbed the cleanliness ladder and stood at rank 13 in Swachh Survekshan 2019 among 4,237 cities surveyed. Despite making these significant strides in the cleanliness department, currently, waste management is proving to be a challenge for the city.

I take a rickshaw from my place to the Raj Bagh metro station here in Ghaziabad, daily. As soon as I reach Ram Manohar Lohiya Park, I’m welcomed by a foul smell and stink, making it difficult for me to breathe, courtesy open kachra ghar (garbage station). Though, this wasn’t the case earlier. The exponential increase in the amount of waste being dumped there and the place becoming a breeding ground for insects and hub for cattles has been noted in the last one month, says 54-year-old Kavita, while speaking to NDTV. 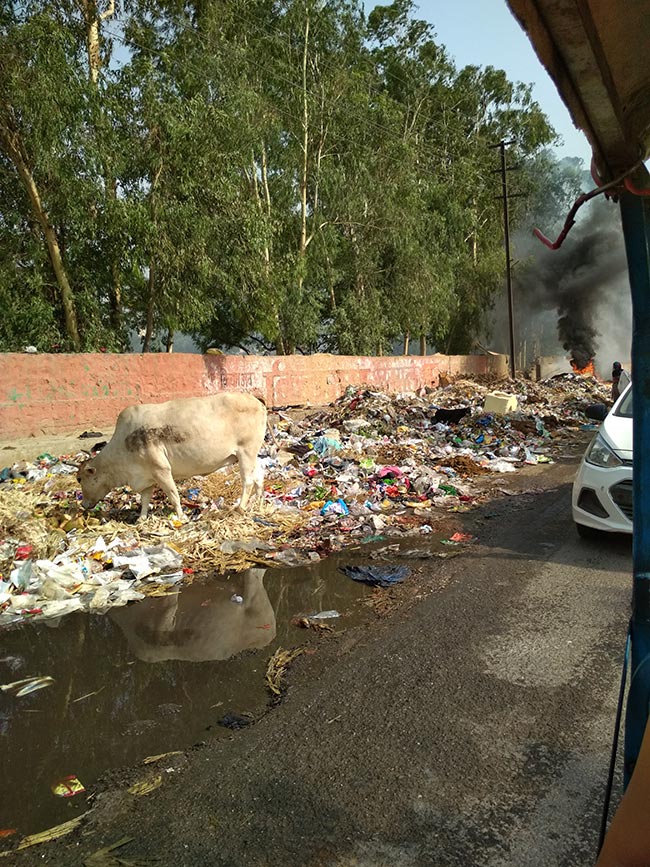 To reduce the amount of municipal solid waste piled up at kachra ghar (garbage station), it was put on fire

To validate the blot on city’s swachh quotient, NDTV did a spot check and found municipal solid waste lying there for days and cases of waste burning. When we raised the matter with Pramod Kumar, Additional Municipal Commissioner, Ghaziabad Municipal Corporation, he explained,

Imagine a city without any landfill or a place to keep the collected waste. Our city Ghaziabad with a population of 16.48 lakh is undergoing a similar problem. Currently, we don’t have any landfill hence the waste is dumped at small collection points and from there it is taken for processing.

The Ghaziabad Municipal Corporation (GMC) has acquired patches of land at different locations for the dumping of waste. The collected waste is dumped at those sites and there the process of segregation and sending waste for treatment takes place.

The area you are talking about is cleaned on a regular basis. Waste pickers belonging to unorganised sector who collect waste from door-to-door dump the collected waste at these sites, creating a nuisance, said Pramod Kumar. 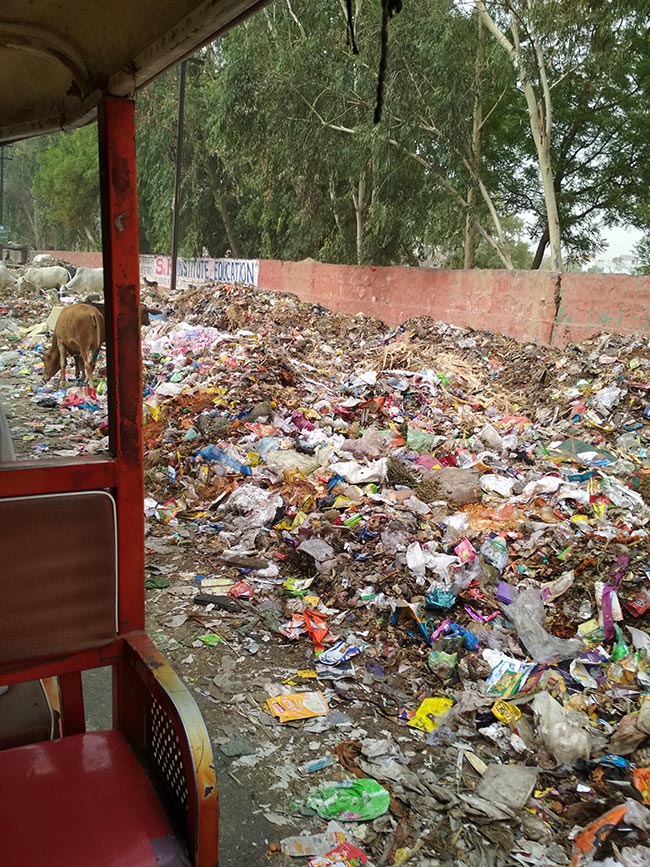 As per the information shared by the municipal officials, Ghaziabad used to have a 21.75 acre landfill at Pratap Vihar, near Hindon river, in the heart of the city, but in December 2018, the National Green Tribunal (NGT) barred GMC from dumping any waste there and ordered its relocation. The decision came after locals complained about the landfill being an eyesore, health hazard and being situated on the banks of Hindon river.

The landfill site at Pratap Vihar had been in operation for 10 years before it was shut down and over the years tonnes of waste had accumulated at this site. Now to tackle this legacy waste a detailed plan has been prepared for the bio-remediation of waste. Bio-remediation is a waste management technique that involves the use of organisms to degrade waste material. With the help of All India Institute of Local Self Government a plan costing Rs 32 crore has been formulated to implement this plan.

The sudden decision of the committee has created a mess for us and we are trying to come up with a solution at the earliest. As an alternative to erstwhile landfill, we have acquired 18.11 acre of land at Galand in Hapur (26 km from Ghaziabad) where we will be constructing a waste to energy plant and the process has already started. We are in a bit of transition stage, said Ritu Maheshwari, then District Magistrate of Ghaziabad. 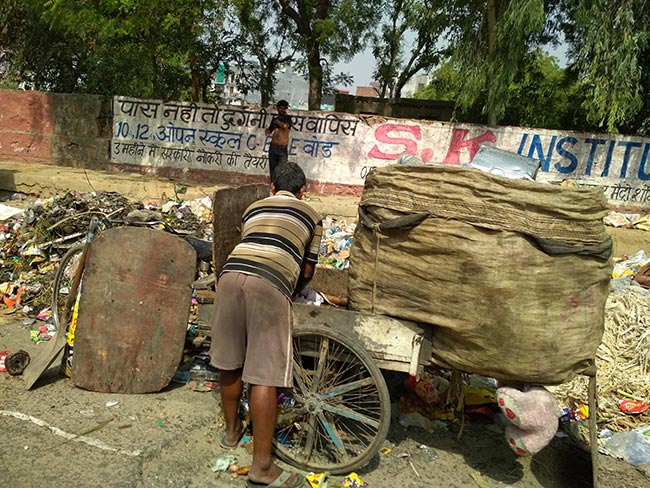 The city of Ghaziabad generates 850 metric tonnes (MT) on a daily basis of which 380 MT is dry waste comprising of paper, plastic, glass, 340 MT is wet waste consisting of vegetable and fruit waste and the remaining 130 MT is an inert waste including construction and demolition waste. While the wet waste is composted, dry waste is given to scrap dealers for the purpose of recycling.

300 of 351 garbage vulnerable points have been transformed into ‘vilopit kooda ghars’ (erstwhile garbage points) by removing waste and planting trees. Door to door waste collection and night sweeping is practised in 82 wards of 10 wards and 24 commercial areas, respectively, informs GMC.

Along with this, GMC has initiated aerobic composting; a kind of composting that requires decomposition of organic matter using microorganisms and oxygen, at 384 of the 1250 parks in the city. A composting machine has been installed at a wholesale vegetable market in Navyug Market to treat the vegetable and fruit waste. 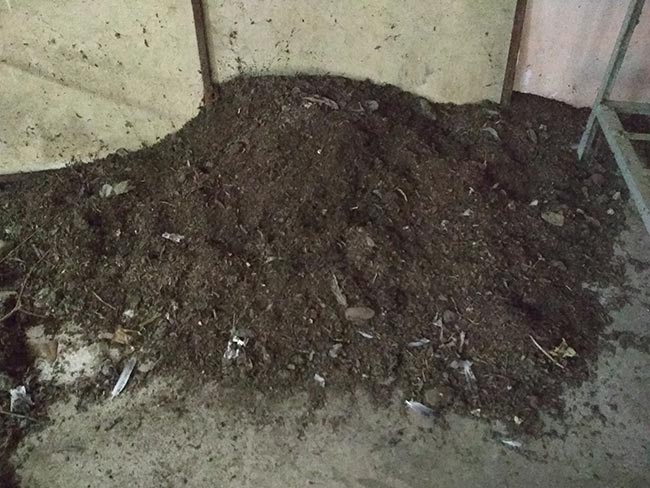 On an average, we get 600 kgs of waste from the sabzi mandi (wholesale vegetable market). In summers, within six days, we get 3 kgs of compost after every cycle. The compost is then packed and sold locally at a price of Rs. 40 per kg, said Ramu Vashisht, incharge of the composting plant installed at Navyug Market.

On visiting the composting plant, NDTV found that the majority of the organic waste is indeed being composted, but there was still a part of it lying around with other kinds of waste at a kachra ghar, opposite to the composting plant; to which Ramu replied, “Sometimes we get a lot of mixed waste which can’t be segregated so we have to discard it. 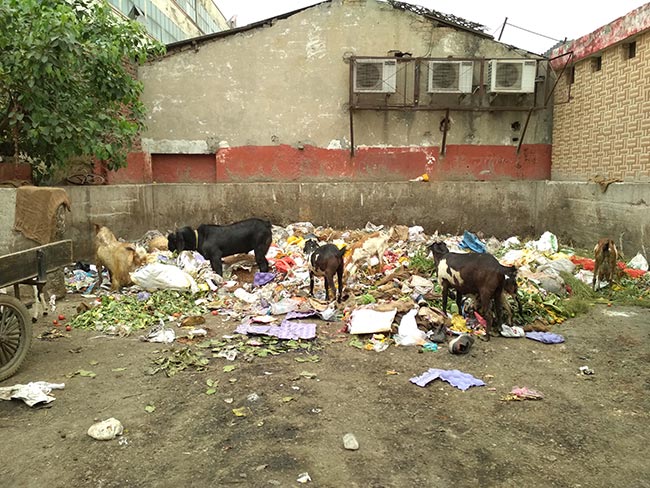 Mixed waste lying opposite to the composting plant at Navyug market

Though GMC has taken up a lot of initiatives to improve its cleanliness and hygiene quotient, but currently in the absence of a landfill, the city’s waste management is struggling a bit and the municipal corporation has its hands full till the new landfill becomes operational.

Also Read: Five Years Of Swachh Bharat Abhiyan: Living In A Sea Of Garbage, A 25-Year-Old Waste Picker’s Take On Life In A New Delhi Slum

An Exchange On Twitter Led Anand Mahindra To A Big Decision To Ban Plastic Bottles From Boardrooms. Here’s What Happened