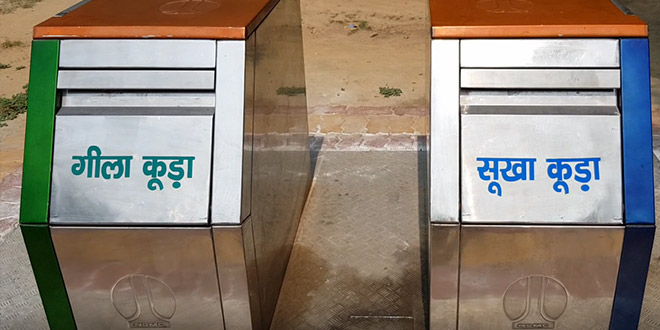 New Delhi: Garbage dumping and storing in the open is not just an eyesore but is a serious health hazard across India. Capital Delhi is no exception. Whether it is roadside bins or kachra ghars (small garbage dump houses) the waste that lies exposed in the open in various parts of Delhi provides a ready breeding ground for flies and other disease causing germs and is also a threat for stray animals that feed on this waste and thrive on these garbage dumps. So the stench, the filth apart, these open places to dump garbage pose a serious challenge to capital’s sanitation and hygiene standards.

The underground bins are dustbins placed below the ground level and fitted with sensors. An individual gets to see only the inlet or two hoods of the dustbin above the ground level. The two kinds of dustbins – one for dry waste which includes paper, plastic, among others and other for wet waste which includes food waste, has been installed at varied locations to promote waste segregation at source. Talking to NDTV about the sensor bins, a senior official from NDMC said,

We have installed 40 dustbins, 20 each for dry and wet waste in various areas of NDMC. Each bin has a capacity of 1100 litres and a sensor attached to it which provides us with real time status of the dustbins. We have an online portal which has information about all the 40 dustbins. From their location, current status, to the last time they were emptied, the online portal has complete details of the bins. A person sitting in our control room monitors the status of the dustbins 24×7.

Also Read: India’s Garbage Crisis, An On Ground Report: ‘Everyday, We Wake Up To The Smell Of Waste,’ Story Of Thousands Of Homeless Living In Delhi

As and when a dustbin gets 75 per cent filled, the color of the bar highlighting the status of the bin changes to red, indicating the need to collect waste and take it to processing units, says a senior official.

When the bins are 75 per cent full, NDMC control rooms and designated sanitary inspectors get an alert on their mobile phone. Sanitary inspector further directs waste collection compactors to go to the location, collect the waste and take it to processing units.

Explaining the process of emptying the bins, NDMC says,

The underground bins are hydraulically elevated by the compactors and brought to the ground level. Once the bins are on the ground, sanitation workers attach them to the rear end of the truck to empty them. Since the bins have wheels, it is quite easy to take them out on the road. While the wet waste is taken to waste to energy plant in Okhla, dry waste is further segregated and sent for recycling.

Since there is minimal human intervention required, the sanitation workers don’t have to collect waste manually and come in contact with the garbage thus providing them a clean and safe working environment.

Taking inspiration from other countries including UK, in November 2018, NDMC installed 40 underground sensor bins, on a pilot basis. The bins have been procured from The Sheetal Group, India’s leading water tank manufacturer and supplier. Eight months into it, the civic body has only witnessed benefits of these modern dustbins and received praises from people, claims NDMC official.

When NDTV spoke to a few of the locals, they backed the civic body’s claim. Speaking to NDTV, Lalit (name changed), a shop keeper running a shop at Rafi Marg said,

I sell chips, biscuits, pakodas (fritters), among other items on a daily basis. Earlier a dustbin at my shop would fill up within hours and attract houseflies, but now as and when the dustbin gets filled, I empty it in the underground bins placed close to my shop. Those bins are large and closed and municipal council cleans it daily.

So from aesthetic value to greater holding capacity and better management of waste NDMC’s experiment with underground bins has so far proven to be successful.

People are using it and it is evident with the fact that almost all the bins are emptied on a daily basis. We believe it is one of the best solutions for managing waste effectively and other municipal corporations should take a cue from us, signs off NDMC official.

NDMC is not the first corporation in India to adopt underground sensor based bins. Dharamshala, Surat, Panchkula and Dehradun have also deployed similar technology. NDTV spoke to Sanjeev Saini, Executive Engineer, Dharamshala Municipal Corporation, to understand the success and negatives of these bins. He said,

We don’t find cases of cattle breeding on the waste and scattered garbage. Of course, these dustbins don’t stink. The only thing is, in some areas, citizens are using the bins appropriately, while in other areas it is under utilised. I believe it is because of lack of awareness activities from our end and we are working on it.

The lack of awareness about the utility of the underground bins is something some users in the NDMC area also highlight. Amit Arora, working in the NDMC area while acknowledging the benefits of the smart bins said,

Be it traditional bins or underground smart bins, I always use them, instead of mindlessly throwing waste on the roads. Underground bins are obviously superior and ensure cleanliness, but one thing I have noticed is that people often get confused over their usage. As in, there is no sign indicating, ‘pull to throw the waste’.

So far in Delhi, the sensor based bins have been installed at 20 locations including Rafi Marg, K G Marg, Jantar Mantar Road, Mandi House, among others. For now, NDMC does not have any plans to install more such bins in areas under its jurisdiction.