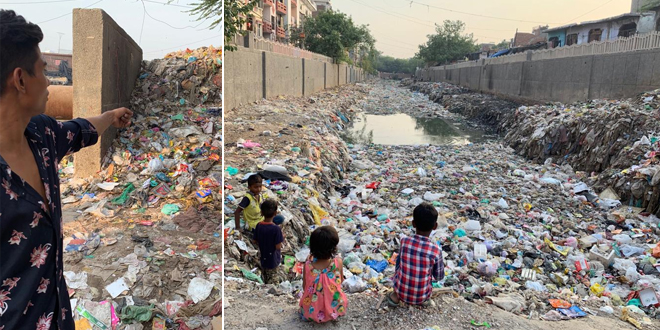 New Delhi: ‘Welcome to my home, the city of garbage, the one which I am very ashamed of,’ these were the first few words of 25-year-old Bismillah. A waste picker by profession he agreed to show us the reality of life in a slum in New Delhi’s Taimoor Nagar that is situated approximately 900 metres away from the posh localities like New Friends Colony and Maharani Bagh. It was five in the evening when we entered the cramped lanes of the slum, to assess the impact of Swachh Bharat Abhiyan after five years. Now just three months are left for the campaign’s October 2 deadline of making India 100 percent open defecation free and celebrate the 150th anniversary of Mahatma Gandhi by fulfilling the promise of clean India. 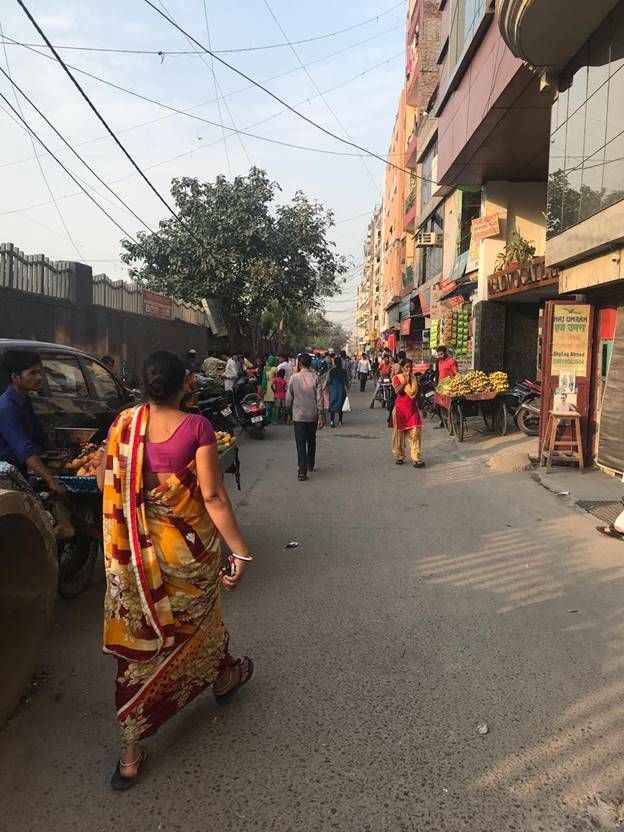 On entering the locality, we spotted a huge divide between the urban slum area and a residential colony of south Delhi – the divide was an open drain that was originally supposed to be a rainwater drain that flowed into river Yamuna, acting almost like a tributary. But now this water channel has become a garbage dumping spot for both sides of the divide – the slum area on one side and the residential colony on the other side. The result – the drain is barely visible under the thick layer of garbage and plastic waste. In fact, the layer of waste is so thick that people can walk over the surface of the drain, it is like a garbage highway!

The filth, the stench and the sheer volume of flies swarming the area are repulsive, to say the least. Something that Bismillah probably gauged from our team’s expressions, he was almost amused when he said, “You are unable to withstand the surroundings for even five minutes, but this where we live. We have lived like this for years.” That was indeed the reality. Few metres ahead, the same drain-turned-dumpyard was being used by children as a playground. There were no qualms among the children who seemed to enjoy jumping around this channel of garbage, almost like a makeshift trampoline in a children’s park. Bismillah who had just come home after his daily shift saw us clicking pictures of the mess FILTH and the children playing in the mess and said,

Aage aage dekhiye aur kitni anokhi kahaniya dekhne ko milegi…(The more you go ahead, the more you will get to see the extent of the mess and the true picture of the living conditions here) 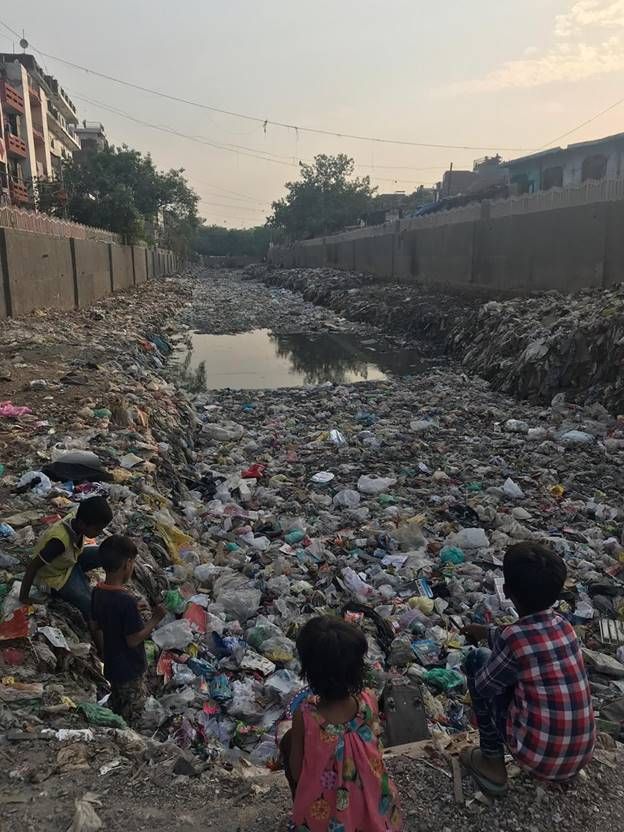 For children living in Taimoor Nagar, this garbage filled open drain is their playground

On the left is where elite people live, one who have big houses but no etiquettes as every now and then you will find people standing in their balconies throwing away garbage-filled polybags into this drain. On the right is where ‘we’ live, the less fortunate people, we have also been following the same routine. The problem is that no garbage van comes here on a daily basis to pick up the waste. As a result, we end up throwing it into the drain. Today, the problem has become so big that when people come here to investigate the issue like you people are doing, they can’t even stand for two minutes without covering their mouth, imagine we all living here 24×7. 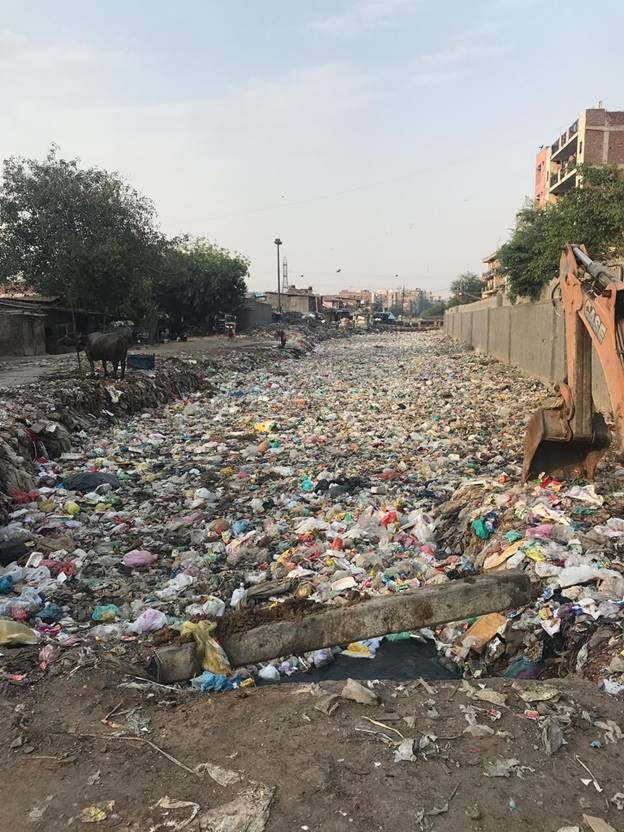 From serving as a trampoline to being a thoroughfare between two sides, this garbage laden connecting ‘path’ is central to the locality and its residents

Bismillah also added that the drain has taken the lives of several children during rainy seasons. While playing or crossing over the garbage channel many people have drowned as they thought this thick layer is as strong as the road not knowing that below the garbage mess there is a drain flowing. To prevent such mishaps and put a stop to open garbage dumping, South Delhi Civic Body also built elevated cement walls on both side, but people started dumping garbage from their balconies and children started accessing the drain from the middle path which has been kept open for the trucks to come and clean the drain.

It is still like living in hell, I wake up every day around 5 am in the morning – take my brush and a water bottle along, walk for five minutes to a nearby jungle area to relieve myself. Come back and quickly get ready for my shift at 7 am. I don’t wear my pants when I head out instead take them along as I have to cross a bridge near my home that is mostly filled with bad drain water, which is approximately knee-deep. I am a waste picker myself, but I don’t work here at Taimoor Nagar, I work outside in a different colony under Residential Welfare Association, said Bismillah.

Also Read: India’s Garbage Crisis, An On Ground Report: ‘Everyday, We Wake Up To The Smell Of Waste,’ Story Of Thousands Of Homeless Living In Delhi 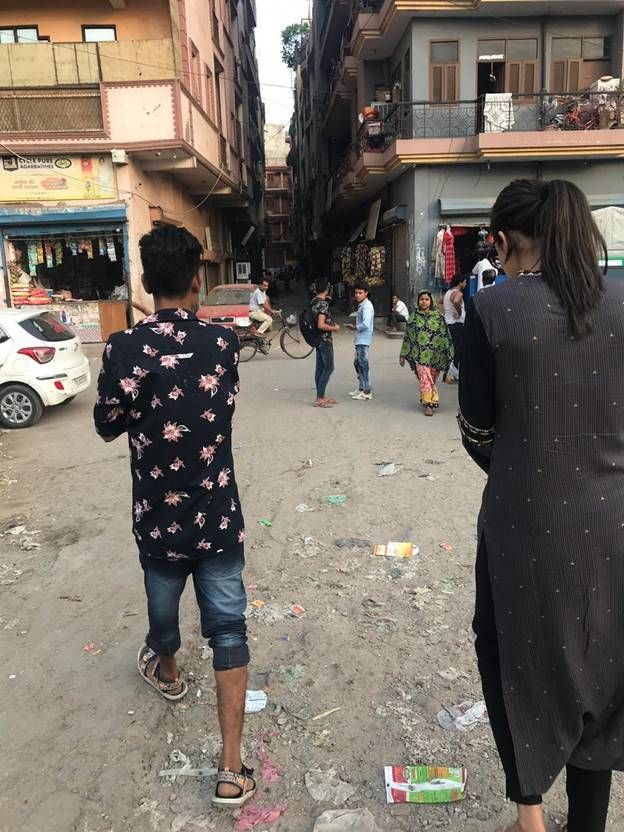 Being a waste picker himself, Bismillah thinks that it is the civic body or authorities duty to get rid of this accumulated garbage and work to improve the living conditions. He says if authorities can put an action plan for the waste collection process, a lot can change here.

Not just waste collection, even if some dustbins are put nearby and people can be guided to put their waste there, Taimoor Nagar will be different. But the problem is that for officials and authorities of taimoor nagar, it is still not a colony where an action plan is needed – they don’t know the condition as they have never visited us, added Bismillah.

Showing us around, Bismillah also pointed out another small lane within the locality that was half-covered with all sorts of garbage and a half with an open sewer. He said, “This is the accident-prone area of the colony, every day, at least one accident happens here. This sewer has been open from many years now – no one from the authorities has ever come here.” 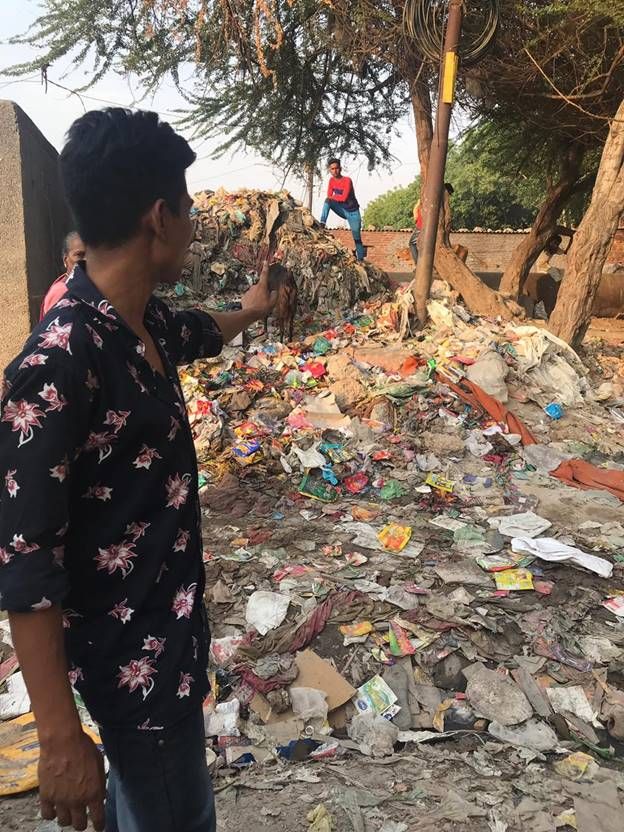 This very spot is used by people to cross from one side of the colony to the other side, but thanks to the unchecked dumping of garbage the pathway is now blocked

Talking to NDTV about the waste management situation in Taimoor Nagar, a senior official from the corporation who wishes to keep his name anonymous said,

The garbage van does go to the place, the issue is that because of narrow lanes it can’t go to everyone’s doorstep, people need to come out and discard off their waste. But because of careless attitude and non-awareness, the residents of Taimoor Nagar feel that dumping it in that drain is more convenient. We have given contracts to private tractors to clean up the drain on a weekly basis. Moreover, one tractor has permanently been deployed at that sight. For now, we are looking at options on how we can make residents more educated and make them work in sync with the civic body.

The problem with national capital’s waste management is that till now authorities have restricted themselves to pilot projects and that’s why you see waste segregation happening in only a few societies. As a result, colonies like Taimoor Nagar remains unchanged, making us question the waste management system or action being taken in the city. It is high time, we need to move forward and think of ways on how together the city can cope up with the issue of garbage. The authorities need to get various NGOs or volunteers involved and stop thinking that they can manage and fix waste issues on their own as clearly, that is not working.

She further said that authorities need a 360-degree plan of action to cope up with waste management. “They need to think of ways to cater TO 100 per cent door-to-door waste collection and then think of ideas on how the rule of waste segregation at source can be implemented well and last but not the least on how the segregated waste will be managed effectively. As of now, not even one area is being covered fully,” adds Swati Singh

Jyoti Sharma from FORCE, a non-profit organisation that has been working in Taimoor Nagar for the community, water conservation safe water and sanitation since 2004, adds,

Over the past few years, very little has been done by authorities to change the grim reality of Taimoor Nagar. It has only degraded with the garbage pilling up more and more in the open drain leaving thousands of people at various health risks. Twice a year, the drain gets cleaned by the authorities but nothing more. They come and say that bins will be placed but that’s it. For Taimoor Nagar to be thoroughly cleaned up, the government needs to take appropriate action. If services of the waste collection can be provided to nearby colonies then that will prevent them from dumping waste in the drain and if that can be kept clean then Taimoor Nagar can also be made more livable.

Taimoor Nagar’s conditions highlight the challenges to achieve the vision of clean India, despite high profile campaign like swachh bharat abhiyan. India is also aiming to be a plastic-free country by 2022 and has reaffirmed its commitment to the Paris Agreement, a pact within the United Nations Framework Convention on Climate Change to combat climate change, accelerate and intensify the actions and investments needed for a sustainable low carbon future.

Meanwhile, Bismillah who has been living in Taimoor Nagar since his childhood along with his mother and four sisters has seen this place go from bad to worse and become a living hell. But he still dreams of getting out of Taimoor Nagar one day after getting his sisters married off into good households. He aspires for a life of dignity and one where life is not living in a sea of garbage.

I always wanted to get out of this waste mess but couldn’t go because this is my mother’s birthplace and she is very attached towards this colony, this is also my birthplace, but one day, I wish to move out, maybe after getting my sisters married. Please tell people our story, please do something about it. Tell the officials to come here and make Taimoor Nagar garbage-free, signs off Bismillah.