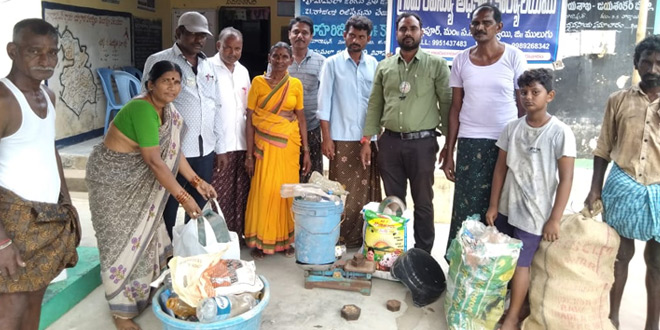 New Delhi: In a bid to check the increasing problem of plastic waste and to make people aware about the hazards of single-use plastic items, the administration of Mulugu, a district in Telangana formed just earlier this year in February, has started a unique drive in all of its 174 villages on Wednesday. As part of the initiative, the district administration of Mulugu has set up plastic collection centres in each village and each citizen will receive one kilogram (kg) of rice in return for each kilogram of plastic waste that they bring in. According to District Collector C. Narayana Reddy, the programme was initiated following Chief Minister K Chandrasekhar Rao’s directions to curb the use of single-use plastic across the State. While talking to NDTV about this drive, Mr. Reddy, whose brainchild this initiative is, said,

Our aim is to completely remove single-use plastic from the district. This is because a large part of the district covers forest area and wildlife sanctuaries that attract tourists from across the country. People are habitual of carrying disposable plastic items which cause huge damage to the flora and fauna here. 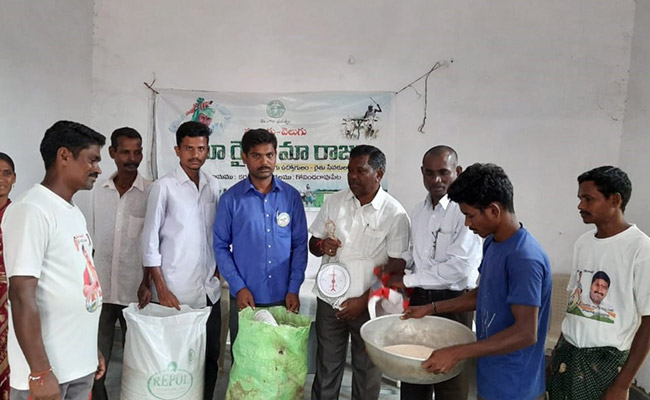 As part of the initiative, each citizen will receive one kg of rice in return for each kgof plastic waste that they bring in

Plastic Collection Drive: A Build Up To A Complete Ban On Single-Use Plastic

The ultimate aim of the initiative ‘Give 1 Kg Plastic Waste To Get 1 Kg Rice’ which will be running from October 16 to October 26 is to remove the plastic waste currently existing in the district and then ban the single-use plastic items like plastic carry bags, plastic cutlery and water bottles from October 27. Mr. Reddy said,

We are committed to making the district single-use plastic-free by February 2020. For this, we will be undertaking stringent measures like penalising the violators with fines ranging from Rs. 1,000 to Rs. 5,000. We are hoping that with the plastic waste collection exercise which is being undertaken currently, we will be able to bring a change in the behaviour of the people as well so that they look beyond the widely available plastic for their daily requirements.

Mr. Reddy asserted that the distribution of rice is being used as an incentive to push for better waste collection practices among people. He said,

We started planning for this initiative about 15 days ago. During this period itself, we received a great response from various donors who provided for the rice that is to be distributed under this initiative. So far 335 quintals and Rs. 5 lakh in cash have been collected for this.

Mr. Reddy shared that about 2,300 kg of plastic was collected across the 250 single-use plastic collection centres that have been set up in Mulugu on the first day of the drive. The district collector hopes to collect up to 50 tonnes of plastic over the next nine days.

Apart from distributing rice, the Mulugu administration is also running various awareness-building campaigns to make people aware about the hazards of plastic to the environment and their health and also educating them about the alternatives to single-use plastic.

According to Mr. Reddy the plastic collected from the 10-day drive will be sent to recycling units that are yet to be identified. The plastic carry bags, however, will be sent to cement factories to be destroyed in a controlled environment in the cement kilns and to be converted into fuel for these factories. 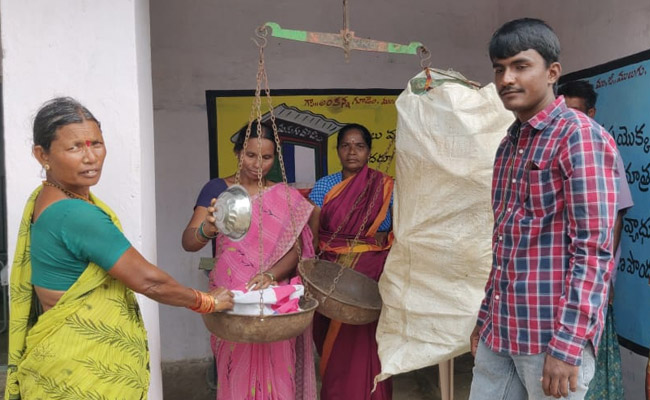 About 2,300 kg of plastic was collected on the first day of the drive

According to the Mulugu district administration, about 3-4 tonnes of waste is generated in each village per day. Out of the total waste generated about 40 per cent comprises plastic waste. Along with this, about 2-3 tonnes of plastic waste is produced per day at tourist places, as per the district administration. Because of the lack of waste segregation in the district, almost all of it is adding to the already over-burdened dumping yards and road-sides.

Mr. Reddy said that the district will be soon starting to prepare for ‘Sammakka Sarakka Jatara’, a four-day festival celebrated every two years to honour the Hindu goddesses Sammakka and Sarakka. During this festival, the plastic waste generation is exponentially high which poses a huge challenge in the path of becoming a plastic-waste free district, as per the District Collector. This year more than 1.2 crore people are expected to gather for the festival which will be celebrated from February 5 to 8. To ensure that plastic waste generated is minimised and the ban is followed, the district administration will be hiring an army of foot soldiers called ‘Paryavaran Mitra’(Friends of environment) who will be guiding the tourists as well as the residents on discarding single-use plastic.

While signing off, Mr. Reddy said,

We are constantly in touch with the village level officials and the elected representatives of each village to spread awareness and make this initiative a success. We are also encouraging the street vendors and retail shop owners to stop the use of plastic wrappers.

Also Read: Hyderabad Metro To Have Waterless Toilets In All Stations And Convert Waste Into Bio Fertiliser