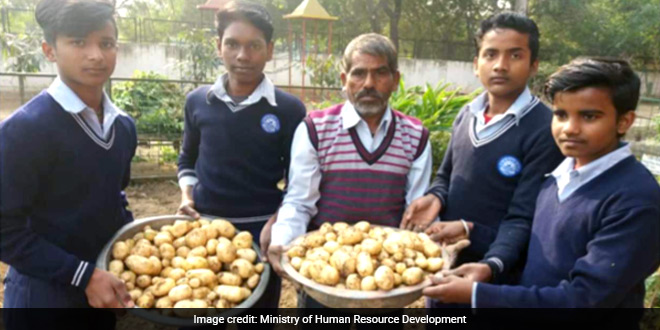 New Delhi: In the age of internet and fast food, it is very difficult to maintain a dietary balance of in the junk vs nutritious food battle among children. As per the UNICEF’s State of World’s Children 2019 report, one in every five children under the age five is vitamin A deficient, one in every third baby has vitamin B12 deficiency and two out of every five children are anaemic. The report states,

Urban India is moving into an unhealthy food snacking environment, which is influencing children’s food choices and this is spreading to rural areas. Food consumption patterns in India reveal that child diets are largely starved of proteins and micronutrients and are influenced by household (adult) food choices.

With an aim to address the issue of malnutrition in India and encourage the consumption of nutritious food among children, the Ministry of Human Resource Development (MHRD) has directed all the schools in rural and urban areas to set up Nutrition Gardens or kitchen gardens in the school campus.

The proposed Nutrition Garden would help in addressing issues such as malnutrition and micronutrient deficiencies among school children. In addition to the nutritional aspect, these gardens would also pose as experimental learning for students, said a senior official from MHRD told NDTV.

As per the guidelines issued by the MHRD, the nutrition gardens will help ‘enhance the knowledge of children regarding nutritional aspects of vegetables and harmful effects of junk food’.

The official asserts that the added benefit of the initiative would be its contribution to reducing the effects of climate change. She explains,

Procuring the food locally would reduce the need for food transportation thus decreasing carbon emission from fossil fuels and reducing the overall greenhouse gas production. There are 11.75 lakh government and government-aided schools in India, one nutrition kitchen per school can have a substantial impact on the climate.

As per the guidelines, the schools may consider each class dedicated towards understanding nutrition gardening for one or two hours per week, with children taking up occasional extra responsibility on voluntary or rotational basis.

Children should inspect their crops every day – on their way to class or homes and even during breaks, the guidelines suggest.

The initiative will also encourage students to learn and practice composting and water harvesting. While composting is the most efficient way to manage organic waste and would also help in the gardening process, water harvesting will sensitise young children about water scarcity and need for conservation.

The official further explained that the schools can seek technical, infrastructural and other assistance from agencies and various government departments and involve parents, teachers, teaching and non-teaching staff to promote the skill of growing their own food.

Give One Kilo Plastic Waste To Get One Kilo Rice, A 10-Day Drive In Mulugu, Telangana To Take On Plastic Pollution