New Delhi: “I remember coming back from an office party late at night, earlier this month. I had a long way to go and wanted to use washroom in between. Though, keeping in mind the usual state of public toilets that is uncleaned urinals, full of stink, I gave it a second thought. But having no other option, I stopped at Miyapur metro station to use the washroom. As soon as I entered, I was shocked! Reason being, the urinal was spic and span. I felt like I was watching a dream”, tells 36-year-old Naveen Meena from Habsiguda, Hyderabad. What appears like a dream has been turned into a reality, courtesy Hyderabad Metro Rail Limited (HMRL). In a bid to ensure sanitation and hygiene in the city, HMRL initiated waterless urinals four months ago. To start with, waterless urinals were installed at four metro stations in the city which includes Miyapur, Kukatpally, JNTU and Rasoolpura Metro stations.

How Do Waterless Toilets Work?

In waterless toilets, the urine is collected in an anaerobic digester where bio-fertilisation process takes place. In the digester, microbes work on the collected urine, reduce stickiness, dissolve solids and separate ammonia and nitrogen. While nitrogen is used as an automatic fertiliser for plants, ammonia is again treated by microbes and is converted into safe water. The safe water is then directed to a soak pit through a channel. The safe water or odourless water can be used for plants. 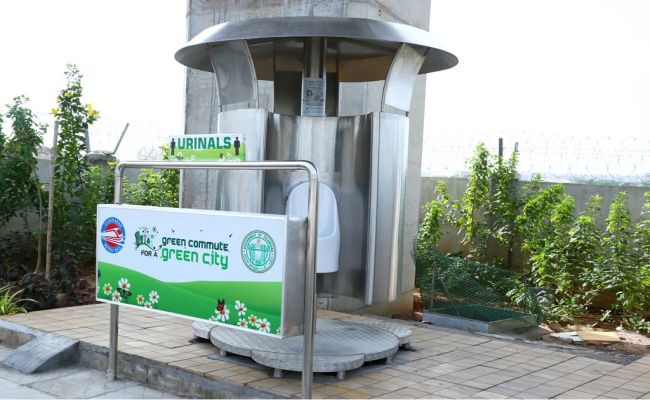 Cost Of Setting Up Waterless Toilets

Traditional urinal systems, with automated flushing, uses 500 – 750 ml of water per flush. Imagine the amount of water that goes to waste every day. Also, to keep the urinals odourless, numerous chemicals are used. With waterless and odourless urinals, we are not only saving water and chemicals, but also making use of the human waste. These urinals pay for itself in 7-8 months and runs for years. The system can save 96 per cent of the water required to clean traditional urinal systems, says NVS Reddy.