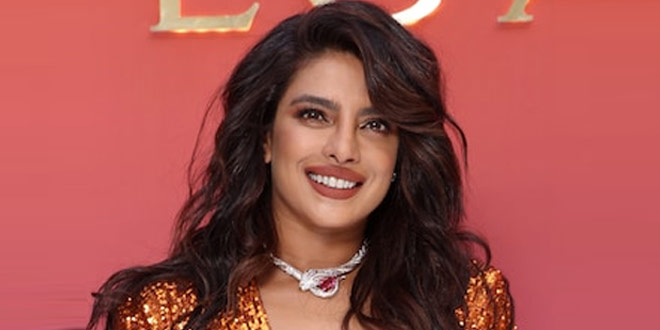 Stressing that the deadline to achieve the SDGs is fast approaching, Priyanka said the present and the future of the world rest "in our hands"

United Nations: With just under eight years left to achieve the Sustainable Development Goals (SDGs), actor-producer Priyanka Chopra Jonas said “a just, safe and healthy world” is the right of every individual which can become a reality with global solidarity. During her appearance at the 2022 Sustainable Development Goals (SDG) Moment opening remarks at the United Nations General Assembly, the “Quantico” star weighed in on some of the world’s most pressing issues such as the COVID-19 pandemic, climate crisis and poverty.

In a speech shared by the UN via YouTube on Monday, Priyanka said,

We meet today at a critical point in our world, at a time when global solidarity is more important than ever. As countries continue to struggle from the devastating effects of the COVID-19 pandemic, as the climate crisis appends lives and livelihoods, as conflicts rage, and as poverty displacement, hunger and inequalities destroy the very foundation of the more just world that we have fought for such a long time.

The UNICEF Goodwill Ambassador said, “all is not well with our world”.

These crises did not happen by chance but they can be fixed with a plan. We have that plan, the UN sustainable development goals – a to-do list for the world. These goals were created hand in hand with people around the world in 2015; together we have an extraordinary opportunity to change the world that we live in, she added.

According to the UN, the SDGs are a universal call to action to end poverty, protect the planet and improve the lives and prospects of everyone, everywhere. The 17 Goals were adopted by all UN Member States in 2015, as part of the 2030 Agenda for Sustainable Development which set out a 15-year plan to achieve the Goals.

Stressing that the deadline to achieve the SDGs is fast approaching, Priyanka said the present and the future of the world rest “in our hands”.

We owe it to our people, we owe it to our planet. We all deserve a just, safe and healthy world to live in. But time is running out. We are nearly halfway to the 2030 deadline to achieve these goals.

In this room of our representatives of the very who signed up those goals in 2015, leaders who can make that plan a reality, in partnership with all of us. So, today is about action, it’s about ambition, but it is also about hope. It is about what we must do together to make the SDGs a reality.

The SDG Moment serves to place an annual spotlight on the Sustainable Development Goals. It takes place as the world faces a deepening cost-of-living crisis that carries huge implications for the advancement of the SDGs, especially in developing countries.

Also Read: Temperature Expected To Go Up By 2.2 Degrees Celsius By 2050 In Assam