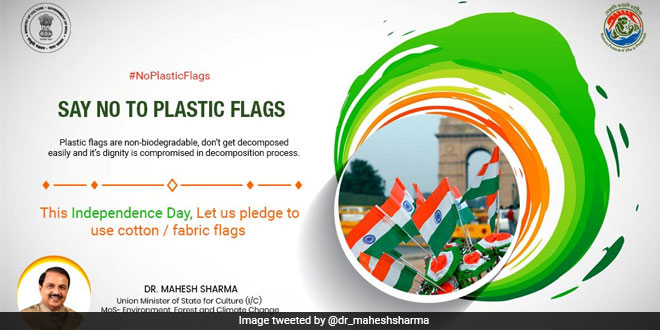 New Delhi: Ahead of Independence Day, Dr. Mahesh Sharma, Union Minister of State for Environment, Forest and Climate Change, has urged the citizens not to use national flag made up of plastic. While stressing on the need to create awareness among people to not use plastic flags, Dr Sharma said that since plastic flags are not biodegradable like paper or cotton flags, these do not get decomposed for a long time, and the disposal of plastic flags compromise the dignity of the National Flag. Mr Sharma even pledged to say no to plastic flags and urged everyone to take the pledge to use fabric flags only.

This Independence Day, let us pledge to use fabric flags only. I pledge to say no to plastic flags. Join the movement by tagging your friends with #NoPlasticFlags, the minister tweeted.

This Independence Day, Let us pledge to use Fabric Flags only. I pledge to say No To Plastic Flags. Join the movement by tagging your friends with #NoPlasticFlags pic.twitter.com/FALXOYUKrG

To spread awareness among people to use cotton flags, the Minister of State for Environment is distributing around 1,000 cotton flags for free in his constituency Gautam Budh Nagar, Uttar Pradesh.

To spread a significant message of ‘say no to plastics’, the government also issued an advisory, asking the states and Union Territories to ensure strict compliance of the flag code and not to use plastic flags. As per the advisory, wide publicity for not using the national flag made of plastic is to be made along with its advertisement in the electronic and print media.

Also Read: Government Issues Advisory, Asks Citizens To Not Use National Flags Made Up Of Plastic

The Union Ministry of Youth and Sports also took to Twitter to urge people to celebrate Independence Day in an eco-friendly way. “This Independence Day, celebrate your love for India by going eco-friendly. Let us pledge to use fabric flags only and say no to plastic flags,” the tweet said.

In addition to ministries advocating against plastic flags, the prank call master, RJ Raunac aka Baua, along with Telangana’s Inspector General of Police Swati Lakra among others took to Twitter to urge people to use cotton flags this Independence Day.

Handy Small Flags Can Be Of Paper

As per the national flag code, the flags made of hand spun and hand woven wool, silk and cotton should only be used. And on important national, cultural and sports events, flags made of paper only are to be used by public in terms of the provisions of the ‘Flag Code of India, 2002’ and such paper flags are not to be discarded or thrown on the ground after the event. Such flags are to be disposed of, in private, consistent with the dignity of the flag.

Violation Of Flag Code Is An Offense

According to the Section 2 of ‘The Prevention of insults to National Honour Act, 1971’ – Whoever in any public place or in any other place within public view burns, mutilates, defaces, defiles, disfigures, destroys, tramples upon or otherwise shows disrespect to or brings into contempt (whether by words, either spoken or written, or by acts) the Indian National Flag or any part thereof, shall be punished with imprisonment for a term which may extend to three years, or with fine, or with both.

Urban Areas In Manipur Declared ODF, A Year Before 2019 Deadline