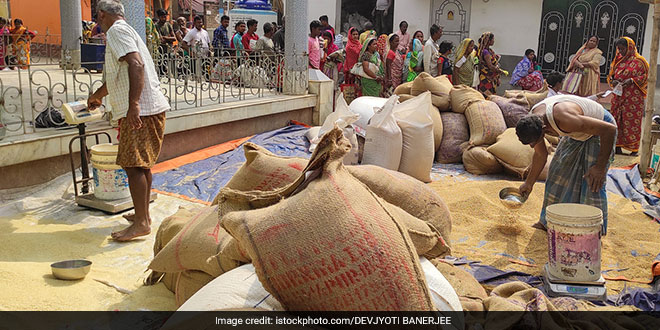 New Delhi: The government on Wednesday extended Pradhan Mantri Garib Kalyan Ann Yojana (PMGKAY) for three more months so that poor and vulnerable sections are supported for the major festivals including Navratri, Dussehra, Milad-un-nabi, Deepawali, Chhath pooja, Gurunanak Dev Jayanti and Christmas. The scheme will continue till December this year.

Briefing reporters after a meeting of union cabinet, Information and Broadcasting Anurag Thakur said the Cabinet has approved the extension of the PMGKAY scheme for another three months. He said the scheme, which was ending on Friday (September 30), will now run through December 31, 2022, Anurag Thakur said.

An official release said at a time when the world is battling with the effects of Covid on its decline and insecurity due to various reasons, India has been successfully maintaining food security for its vulnerable sections while taking necessary steps to keep availability and affordability for the common man.

Recognising that people have gone through a difficult period of pandemic, the government has decided to extend PMGKAY for a period of three months so that poor and vulnerable sections of society are supported for the forthcoming major festivals like Navratri, Dussehra, Milad-un-Nabi, Deepawali, Chhath Pooja, Gurunanak Dev Jayanti, Christmas, the release said.

It said the beneficiaries will continue to enjoy the benefits of easy availability of foodgrains without any financial distress.

Under the welfare scheme, 5 kg of food grain per person per month is provided free of cost for all the beneficiaries covered under the National Food Security Act (NFSA) [Antodaya Anna Yojana & Priority Households including those covered under Direct Benefit Transfer (DBT).

The financial implication for the Centre has been about Rs. 3.45 lakh crore upto Phase-VI of PMGKAY.
With the additional expenditure of about Rs 44,762 crore for Phase VII of this scheme, the overall expenditure of PMGKAY will be about Rs 3.91 lakh crore.

The total outgo in terms of food grains for PMGKAY Phase VII is likely to be about 122 LMT. The aggregate allocation of food grain for phases I- VII is about 1121 LMT.

PMGKAY has been in operation for 25 months between April 2020 and September 2022. It was announced by the government on March 26, 2020, during the Covid pandemic. The scale of this welfare scheme makes it the largest food security programme in the world.