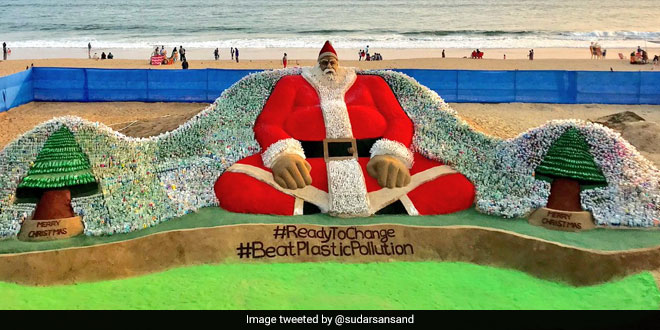 Mumbai: A Santa Claus with a message that is the thought behind internally acclaimed sand artist Sudarsan Pattnaik’s latest creation on ocassion of Christmas. Highlighting the horrific state of plastic pollution, Mr Pattnaik has created a magnificent and gigantic sculpture of Santa on sand using 10,000 waste plastic bottles on the Puri beach in Odisha to sensitise people about the dangers of indiscriminate use of plastic.

Wishing everyone a #MerryChristmas . On the eve of #Christmas⁠ ⁠ through installation of 30ft high & 100ft wide #SantaClaus on Sand with 10 thousands Plastic bottles. Let’s get #readytochange and #BeatPlasticPollution to save our #Environment . pic.twitter.com/gXcj1XisYY

“By reusing thousands of plastic bottles, I wanted to send out the message of recycle and reuse of plastic items. Instead of throwing them on the landfills or in water bodies, we can recycle the plastic in several ways. Let this Christmas be eco-friendly and plastic-free,” Mr Pattnaik said.

Eyeing a world record for installation of the biggest Santa Claus, Mr Pattnaik and his team of 40 from Sudarsan Sand Art Institute started working on December 23 and by Christmas Eve the artwork was ready and open for the visitors. In the past, he had created a Guinness World Record by building the world’s tallest sand castle which is 48 feet and 8 inches (14.84 metres) at the Puri beach.

Attempting another world record on the eve of #Christmas . Installation of The Biggest #SantaClaus on Sand with Plastic bottles
With message #BeatPlasticpollution pic.twitter.com/TTKfeQcCKp

For his latest creation, He used nearly 800 tonnes of sand and 10,000 plastic bottles to create the 30-foot-high and 100-foot-wide Santa on the beach. The installation will be displayed till New Year. All the plastic bottles will be sent to recycling units in the city to ensure it doesn’t pollute the environment.

Satya Tripathi, who is the Assistant Secretary-General at United Nations Environment congratulated Mr Pattnaik for highlighting the urgency of climate change and spreading the holiday cheer with a thoughtful gesture.

Situated on the shore of Bay of Bengal, Odisha’s Puri beach has witnessed innumerable creative sand arts revolving around the theme of Swachh Bharat Abhiyan, cleanliness, sanitation, environment and garbage crisis in the past from the Padma Awardee. These creations  have won many accolades and has been appreciated by the likes of Prime Minister Narendra Modi.