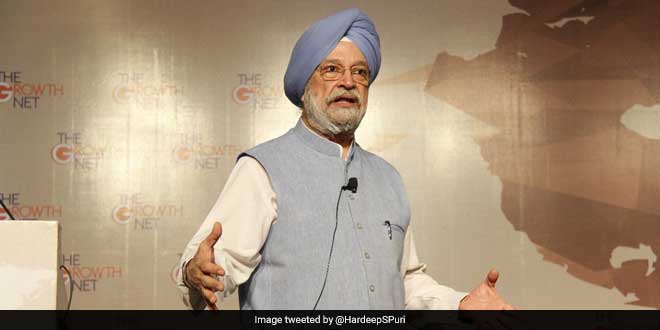 New Delhi: Urban area cleanliness will not be possible without behavioural change, unless people themselves take up the initiative to keep their surroundings clean. This was Union Urban Development Minister Hardeep Singh Puri’s message at the Confederation of Indian Industry’s function on Smart Cities. Talking about sanitation in urban spaces, Mr Puri said that a major behavioural change was needed on behalf of urban populace to ensure that the Smart Cities campaign becomes a success. The Smart Cities mission was launched in 2015 and till date, 99 cities have been chosen to be transformed into sustainable and modern. Access to safe sanitation and scientific management of waste are two very important aspects which the Smart Cities mission looks to imbibe in these shortlisted places.

The Union Minister for Urban Development said that merely building toilets will not be sufficient as people must understand that using them is a more hygienic option, than to defecate in the open.  Swachhta was a basic principle of making a city smart, and the Smart Cities Mission would not be complete without the cities adhering to basic hygiene and cleanliness, said Mr Puri.

You can build all the toilets you like but unless people come to the conclusion that it is more hygienic to use them than going out in the open space, because unless you have the Swachhta (cleanliness) right, you won’t get the smart city right, Mr Puri was quoted by PTI.

Talking about the Swachh Bharat Abhiyan, Mr Puri said that when Prime Minister Narendra Modi initiated the campaign and gave the call for an open defecation free India, he was asking for a paradigm shift so that behavioural change among people gradually develops. Mr Puri also said that the Smart Cities mission, which looks to develop urban spaces across India and provide access to public toilets and a scientific waste management system, needed strong cooperation among Centre and states. Ever since the programme’s launch in 2015, the Smart Cities mission has focused on bettering sanitation facilities in the shortlisted 99 cities, and develop sustainable waste management models.

The Union Minister also met Lawrence Wong, Singapore’s Minister for National Development and discussed the Smart Cities mission with him. Mr Puri and Mr Wong discussed Singapore’s success story in terms of urban development and how many Indian cities are moving in a similar direction.

Under the urban wing of the Swachh Bharat Abhiyan, over 53 lakh individual household toilets have been constructed till now and the urban areas of seven states have been declared as open defecation free. At the announcement of the Swachh Survekshan 2018 winners last month, Mr Puri said that 2,133 cities and urban local bodies have been declared as ODF and 145 waste to compost plants were operational in the country, with a capacity to process 63 lakh tonnes of waste out of the total waste generated of 15,000 tonnes.