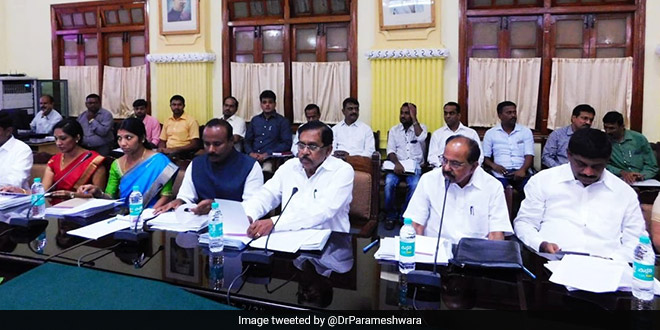 New Delhi: Toxic foam emerging from lakes, frequent strikers by waste workers resulting in waste piling up on roads and lack of enough public toilets, Bengaluru has hit the headlines quite frequently in the last few years for all the wrong reasons. The closely fought Karnataka legislative assembly elections last month saw pollution and civic amenities in Bengaluru becoming a frequent topic during campaigns, with political parties promising to better the situation once in power. With the political situation in Karnataka settling down with the emergence of the Congress-Janata Dal (Secular) alliance, the state’s Deputy Chief Minister G. Parameshwara has announced that he will take up the issue of pollution in Bengaluru, and work on ‘war footing’ to protect the city’s lakes.

The Deputy Chief Minister’s announcement comes merely days after Bengaluru’s infamous Bellandur lake being in the news again, due to toxic froth emerging from the lake once again, and a National Green Tribunal (NGT) labeling the lake as Bengaluru’s biggest septic tank in a report. In a press conference to discuss the pollution situation in Bengaluru, Mr Parameshwara, who is also the Minister-in-charge for Bengaluru city related projects, said that tackling plastic waste and revamping the city’s dying lakes were the present government’s priorities. Measures are being taken to make Bengaluru plastic free. Mr Parameshwara chaired a meeting with Bengaluru MLAs and Bruhat Bengaluru Mahanagara Palike (BBMP) members to discuss Bengaluru’s pollution issues. Waste management was one of the topics discussed extensively in the meeting, with the Deputy Chief Minister promising to clear the proposals for setting up two waste-to-energy units in the city.

The Deputy Chief Minister discussed in detail the pollution situation in the city, with special emphasis on Bengaluru’s lakes and plastic waste. The Deputy CM said that he will ensure the clearance of two waste-to-energy projects. He also said that six garbage processing units will be set up at a later stage. He also took stock of the Bellandur cleaning process and asked for regular updates, said a BBMP official.

The state government and Bengaluru’s civic agencies have been criticised by the NGT time and again for their role in the Bellandur lake crisis. The Deputy CM said that de-weeding the lakes was one of the first steps the state government plans to take, and gradually it will work towards diverting flow of untreated sewage into treatment plants, rather than directly into the lakes. The inability of Bengaluru’s civic agencies to ensure that industrial and domestic untreated sewage does not get dumped directly into the city’s lakes has resulted in severe depletion in the lakes’ water quality, as mentioned in the NGT report. The BBMP is in charge of monitoring sewage flow into the lake, while the Bengaluru Development Authority (BDA) is in-charge of the lake’s overall maintenance. Differing duties have often led to disagreements between the two bodies, resulting in little or no progress in the lake’s revitalisation.

I would like to thank all of you for notifying me on issues related to Bengaluru city. Be assured that your concerns are being looked into by the relevant officials.

Despite the Deputy Chief Minister promising to work on Bengaluru’s lakes and garbage problem, some civil society members and experts have expressed concern, stating that such promises have been made earlier as well, and forgotten.  Dr R.K. Somasekhar, Head of Bangalore University’s Environmental Science Department has extensively researched on the city’s lakes for last two decades and said that a ‘war footing’ approach to solve the city’s lakes may do more harm than good.

“If we take into consideration even one problem, that of untreated sewage flowing into the lake, it will take years to solve it. All the drainage pipes going depositing sewage into the lakes need to be redirected to sewage treatment plants, which themselves need to be set up, and then the government also must take care that the treated sewage does not find its way to the lakes. The whole civic infrastructure of the city needs to undergo a change, and this cannot be done in months or a year,” said Dr Somasekhar.

The Deputy Minister’s promise to curb pollution in Bengaluru comes at a time when the city is struggling with a variety of pollution problems. Given the gravity of the situation, what Bengaluru needs is a carefully worked out holistic approach in tackling all the civic problems for a sustainable solution, rather than piecemeal quick fix troubleshooting.

Maharashtra Plastic Ban: What Is Banned And What Is Not