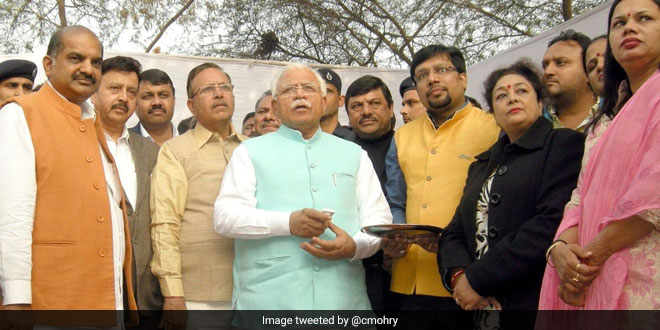 Chandigarh: The Haryana government today launched ‘Swachh Survekshan Grameen’ 2018, a survey of rural cleanliness programme, to ranks the villages on the basis of qualitative and quantitative evaluation.

The “swachhta” survey would be carried out next month and the top performing states and districts will be awarded on October 2, an official statement said.

Chief Minister Manohar Lal Khattar addressed senior police officials through video conferencing today and asked them to ensure active participation of the people. The ranking would be based on the comprehensive set of “swachhata” parameters including the survey of public places, citizens’ perception of “swachhata” and their recommendation for the improvement of the programme.

The ‘Swachh Survekshan Grameen’ 2018 would be formally launched at the district level by ministers and MLAs concerned. A committee under the chairmanship of the chief secretary would soon be constituted to review the progress of “swachhta” works from time to time, the statement said.

According to the campaign, 6,800 villages in 680 districts across the country will be covered and 34,000 public places in these villages will be surveyed.

Mr Khattar appealed to involve zila parishads and zilasamities besides gram panchayats in this campaign and allot some villages to them. The disposal of waste, garbage and cow dung would be properly systemised and the potholes would be filled so as to avoid waterlogging during this rainy season, he added.

He also said that the school students should be involved in all such voluntary campaigns to instill in them the sense of cleanliness from the early age.

Recently, school students have been involved in the implementation of tree plantation programmes, he said, adding similarly, they need to be made aware about the “swachhta” campaign.

A nodal officer would be appointed for this purpose, he said. On the occasion, a senior official of the Development and Panchayats Department said that the survey will be conducted in three phases. First, a survey team would visit the schools, anganwadis, primary health centres, religious places and markets and a total of 30 per cent marks would be given under this direct observation of cleanliness in these places.

Thereafter, under citizens’ feedback, group discussions would be held in village meetings which would be shared with the Government of India through mobile applications. Interviews of sarpanch and other dignitaries of the villages would be conducted. A total of 35 per cent marks depend on this. Survey teams would also check the level of facilities available in the villages such as use and geotagging of toilets and 35 per cent marks depend on this, he said.