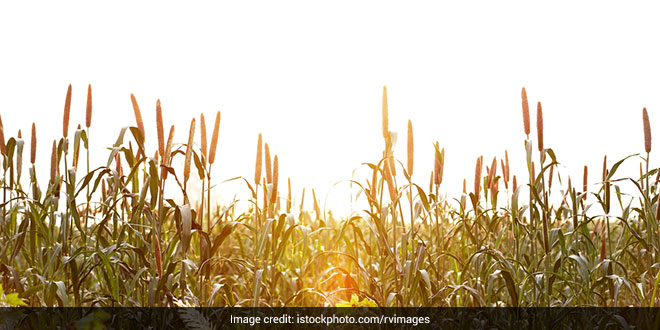 New Delhi: A new study has shown that regular consumption of millets can improve haemoglobin and serum ferritin levels to reduce iron deficiency anaemia, which is rising globally. The findings of the study were published in the journal ‘Frontiers in Nutrition’. The research, a meta-analysis of 22 studies on humans and eight laboratory studies on millets consumption and anaemia, was undertaken by seven organisations across four countries and was led by the International Crops Research Institute for the Semi-Arid Tropics (ICRISAT).

The study concluded that millets can provide all or most of the daily dietary iron requirements of an average person. Although the amount of iron provided depends on the millet variety and its form of processing, the research clearly shows that millets can play a promising role in preventing and reducing high levels of iron deficiency anaemia, highlighted Dr S Anitha, the study’s lead author and Senior Nutritionist at ICRISAT.

The researchers found that millets increased haemoglobin levels by as much as 13.2 per cent. Four studies in the review also showed serum ferritin increasing by an average of 54.7 per cent. Ferritin is an iron-containing protein in the blood and is a clinical marker for iron deficiency. The studies in the analysis involved nearly 1,000 children, adolescents and adults, and six different millet types – finger millet, pearl millet, sorghum and a mixture of kodo, foxtail and little millets. The participants in the studies were found to have consumed millets for anywhere between 21 days and 4.5 years. The findings were published on 14 October in Frontiers in Nutrition.

It has been proven that iron deficiency anaemia affects cognitive and physical development in children and reduces productivity in adults. The need for a solution is critical, and therefore bringing millets into mainstream and government programs is highly recommended, added Dr Hughes.

“Now that there is strong evidence of the value of millets in reducing or preventing iron deficiency anaemia, it is recommended that one major research study be undertaken on anaemia covering all the different types of millet, common varieties and all major forms of processing and cooking, using a uniform testing methodology. This will provide the detail required for designing interventions needed to have a major impact on reducing anaemia globally,” said Professor Ian Givens, a co-author of the study and Director at the University of Reading’s Institute of Food, Nutrition and Health (IFNH) in the UK.

It has often been claimed that iron in millets is not highly bioavailable due to the supposed high levels of antinutrients. Our analysis proves this is a myth. Instead, millets were found to be comparable to typical iron bioavailability percentages for plants. Also, the levels of antinutrients in millets were identified to be similar or lower than common staples, said Ms Joanna Kane-Potaka, former Assistant Director-General, ICRISAT, and Executive Director of the Smart Food initiative who is a co-author of the study.

Also Read: Honoured To Be At The Forefront Of Popularising Millets: PM Modi After UN General Assembly Adopts India-sponsored Resolution

Related Topics:
Anaemia Nutrition
Up Next