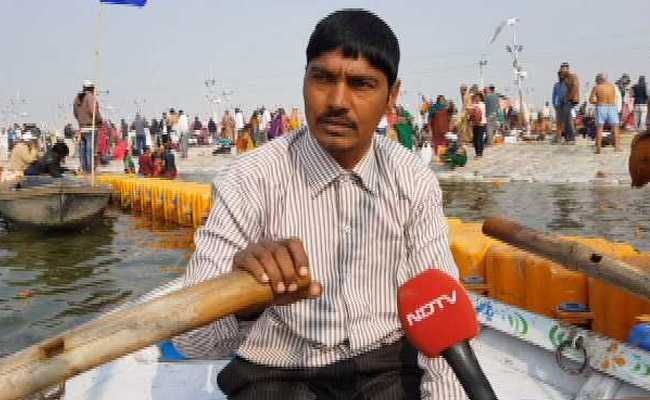 New Delhi: Every morning at 3 am, when many of us are sleeping in the comfort of our homes, boatman Raju Nishad armed with a life jacket, boat and a dustbin in his hand, starts his journey at Sangam to ferry people from one end of the river to another and in the process contribute to the cause of swachh Kumbh. With simple clean Kumbh messages such as ‘yahan kachara mat pheke (please don’t throw garbage in the river)’ or ‘Iss baar Ganga aur Kumbh ko saaf rakhna hai, yahan phool mat bahaye (This time we have to keep Kumbh and Ganga clean, don’t throw your waste or flower in the river), Raju Nishad has been instructing the piligrims and tourists on how they should be helping the authorities keep Kumbh Swachh. Nishad has also kept a dustbin in his boat to ensure people don’t throw waste directly in the river instead use the bin. His motto is to ensure that this year’s Kumbh celebrations remain swachh as much as possible and further spread the word about India’s ongoing movement – Swachh Bharat Abhiyan.

Because of his dedicated Swachh services, Raju Nishad was also recently honoured by Prime Minister Narendra Modi. PM Modi was taking part in Swachh Kumbh Swachh Aabhaar event in Prayagraj where he acknowledged the efforts made by the swachhaagrahis(clean India volunteers) for ensuring Swachh Kumbh becomes a reality. PM Modi then washed safai karamcharis feet as a mark of respect to them in ensuring a clean Kumbh. Praising the efforts of the boatmen at Kumbh, PM Modi said,

Boatmen play an important role during Kumbh. There is a strong relationship between Prayagraj and boatmen. They are the dedicated soldiers of ‘Maa’ Ganga.

During NDTV’s visit to Kumbh earlier this month, we got a chance to speak to Raju Nishad about his Kumbh experience and journey. Sharing his experience of Kumbh, boatman Raju said,

I have been doing the duties as a boatman for many years at Kumbh, but, this time the Kumbh is different. I have never ever witnessed a Kumbh which is this clean. This time, the services and facilities that have been provided to the pilgrims are commendable.

Explaining how he has been making a swachh difference with his duties, Raju added,

We have been guided by the authorities on how we can help make Kumbh clean. So, every time, I start my boat ride, I educate and make people sitting at my boat aware about the swachh deeds they should be following. Many times, people during boat rides buy food for the pigeons and birds so that they can feed them during their ride. The problematic part is that the food packets come with plastic packaging, so, I always ensure that none of the plastic is dropped in the river directly. I politely ask the pilgrims to make sure they are dropping the food without the packaging and once the packet is empty it is securely disposed off in the dustbin placed in the boat.

It is because of people like Raju Nishad, today, Kumbh worldwide is being praised for its cleanliness and swachhata. And it is because of these swachh efforts, Raju and people like him have got a big thumbs up from PM Modi, he had said,

I salute each and every person making a contribution towards a Swachh Bharat at Kumbh.

The 55-day long Ardh Kumbh mela commenced from January 15 in Prayagraj (Allahabad) of Uttar Pradesh and will end on March 4.

Industry Welcomes The Much Awaited FAME II, Says It Has Fast Tracked Adoption Of Electric Vehicles