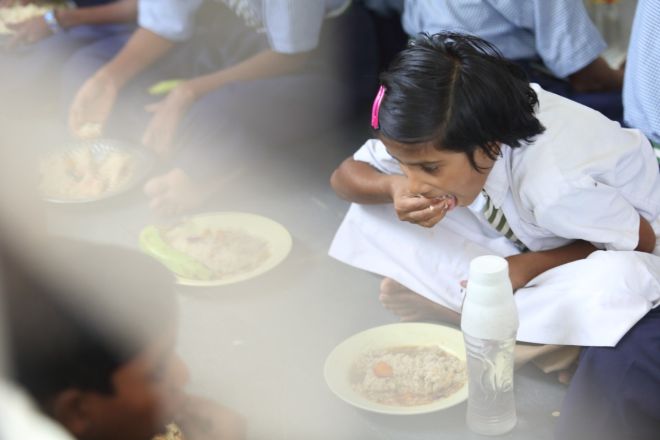 India is home to 46.6 million stunted children out of a total of 150.8 million stunted children in the world; it also accounts for 25.5 million children out of the 50.5 million children who are wasted globally and has a million overweight children, as per the Global Nutrition Report 2018. Not having proper nutrition and food is the prime reason behind these grim statistics in our country. Not just that, we are a country where millions die not because of some deadly disease but because they could not get themselves proper nutritious food. To be precise, our country is home to 194.4 million undernourished people, according to the Food and Agriculture Organisation (FAO). Moreover in 2017, as per the Global Burden of Disease Study by the University of Washington, malnutrition was the top cause of death and disability in India that year.

Here are some of India’s inspiring food warriors who are going the extra mile so that India can be free from its hunger crisis.

Akshaya Patra that means ‘inexhaustible vessel’ in Sanskrit started the Mid-Day Meal Programme in June 2000 by serving meals to around 1,500 children across five government schools in Bengaluru. Over the years, the organisation spread across the country in 45 locations to feed over 17.6 lakh underprivileged children in 15,668 schools. It works in collaborations with the Ministry of Human Resource Development (MHRD) and 12 State governments and is known as the world’s largest NGO-run mid-day meal programme.

The NGO ensures that the food they are preparing is nutritious, healthy and hygienic. A spokesperson from the organisation explains to NDTV that the kitchens at Akshaya Patra are given utmost importance in terms of food safety and hygiene, along with quality and efficiency. The organisation has well-trained cooks and production supervisors to manage and oversee the process.

Moreover, the meals are delivered to school on time with optimal storage and minimal spillage and wastage. The cooked food is packed into stainless steel containers and transported via conveyor belts to be loaded into custom made food distribution vehicles, which is then delivered to the beneficiary schools.

With the simple ideology of ‘beating hunger’, Robinhood Army, a volunteer-based organisation collects surplus food from restaurants and the community to serve the hungry.

The initiative was kick-started by a group of six people in Delhi who wanted to solve two major crisis points – food wastage and hunger. Over the years, the Robinhood Army has spread across 18 cities of India and is serving over 2 lakh people. There are over 46,000 volunteers who are involved with the organisation and are solving the hunger crisis of the country one location at a time.

By Giving People Their Basic Right – Food, NGO ‘Action Against Hunger’ Is Making A Difference

‘No more hungry children in India. No more deaths caused by starvation, no more irreversible damage to mental or physical health due to lack of food and water. No more denying our children their basic human right to be free from hunger,’ reads the vision statement of Mumbai-based foundation Action Against Hunger. The NGO is working with anganwadis and public health centres across India to fight the hunger crisis.

The NGO helps in raising awareness about malnutrition, counselling families on how to ensure proper nutrition for infants, as well as, children, and distribute food-for-free to underprivileged families. It is working across 661 locations in India, which includes Govandi in Mumbai, Mokhada in Palghar, Dharni in Amravati, Baran in Rajasthan, Burhanpur and Dhar in Madhya Pradesh, to name a few.

Also Read: Foodies Are Welcome, Food Wastage Is Not. A Food Court In Telangana Fines Those Wasting Food

In December 2015, the Mumbai Dabbawala Association (MDA), a lunchbox delivery system, came up with an initiative ‘Roti Bank’, wherein leftover food at social gatherings is re-distributed to underprivileged people. Under this initiative, the MDA staff collects leftover food from functions and distributes it among the poor. In the last two years, their waste management drive has saved Rs. 40 lakh worth of food from getting wasted.
Subhash Talekar, the man behind the initiative says, “Mumbai is a city with two different sides. On one hand, there are the well-to-do families which generate humongous food waste and on the other hand are the downtrodden society that cannot even afford one meal in a day. To bridge the gap between the two, Roti Bank initiative was born.”

The MDA has 5,000 employees and every day they pick up over 2 lakh tiffins and feed the hungry and homeless people in Mumbai.

Related Topics:
Food Wastage
Up Next

Five Years Of Swachh Bharat Abhiyan: Living In A Sea Of Garbage, A 25-Year-Old Waste Picker’s Take On Life In A New Delhi Slum