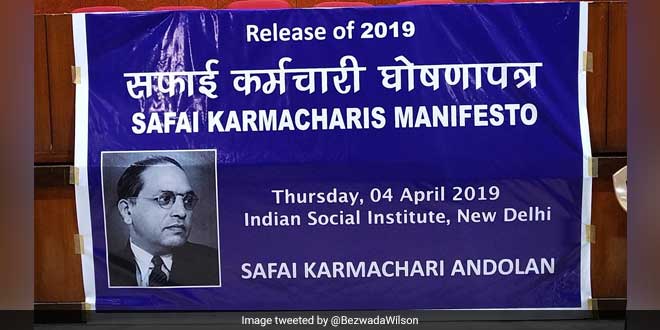 New Delhi: Safai Karmachari Andolan (SKA), an organisation that has been campaigning to eradicate manual scavenging across India, has released its manifesto for the first time, ahead of the Lok Sabha Elections that commence on April 11. According to a spokesperson from SKA, the manifesto lists the specific demands made by the manual scavengers to break the shackles of caste, patriarchy, and for reclamation of their fundamental ‘Right to Life’ with dignity, and will be sent across the political parties.

Manual Scavengers are sanitation workers, scores of whom die each year from asphyxiation (suffocation from toxic fumes) while cleaning, carrying or disposing of human excreta from dry latrines and sewers.

“We have had enough,” said Bezwada Wilson, the head of the Safai Karmachari Andolan (SKA), or Sanitation Workers’ Movement.

The government has done nothing for us in the past five years.

Mr. Wilson launched the hashtag #StopKillingUs on Twitter and demanded government help workers find jobs that give them dignity. The SKA Manifesto’s main demands include the following:

We demand to release every last child, woman and man from manual scavenging in a time bound manner. #StopKillingUs #SKAmanifesto pic.twitter.com/IdJ3oTvifx

The government should bring a white paper on the status of Safai Karmacharis, sewerage deaths and measures taken to stop them. #StopKillingUs #SKAmanifesto pic.twitter.com/6exxmFEC6o

2. The manifesto also demands a universal Right to Life- Article 21, for the manual scavengers and their dependents for ensured access to education, healthcare and livelihood among other benefits.

3. Separate ministry to release and rehabilitate the manual scavengers in addition to a special session of Parliament, to discuss the strategies to eradicate the practice is also demanded by the Safai Karamchari Andolan in their first manifesto.

We demand a special session of parliament to stop sewer deaths and liberation and rehabilitation of manual scavengers. #StopKillingUs #SKAmanifesto pic.twitter.com/ab7SgMrwMu

4. The manifesto further calls for an immediate abolishment of the contract system in the sanitation work and demanded the District Magistrate to be held accountable for any death of a manual scavenger in their respective jurisdiction.

The District Magistrate to be held responsible for every sewer and septic tank death in there respective jurisdiction to end sewer deaths. #StopKillingUs #SKAmanifesto pic.twitter.com/xwNlSoKMxF

5. The manifesto further demands 1 per cent of the union budget be allocated for the liberation and rehabilitation of the manual scavengers. And calls for enhancing the compensation for dependents of sewer death victims from 10 lakhs to 1 crore.

It's high time 1% of union budget to be exclusively allocated for the welfare of Safai Karmacharis including their liberation and rehabilitation. #StopKillingUs #SKAmanifesto pic.twitter.com/sNzs5fEUgH

While government estimates peg the number of manual scavengers at anywhere between 14,000 and 31,000, the SKA says the figure is closer to 770,000, with nearly 1,800 sewer cleaners asphyxiating to death in the last decade. Most sanitation workers find it difficult to get other work because of caste-based barriers, while many operate without formal contracts and are unaware of the terms of their employment, a study by U.S.-based advisory firm Dalberg shows.

IPL 2019: When RCB Decided To Wear Green Jersey Against Delhi Capitals To Bat For The Planet